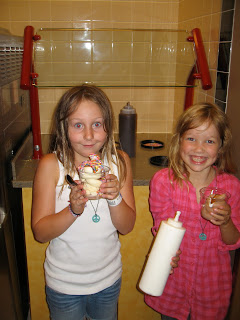 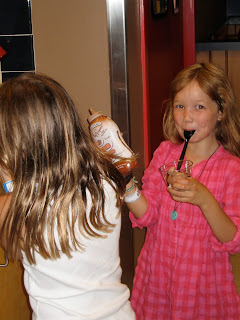 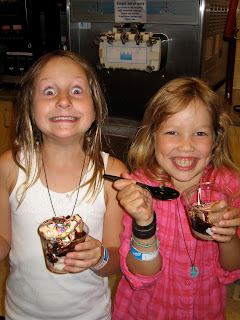 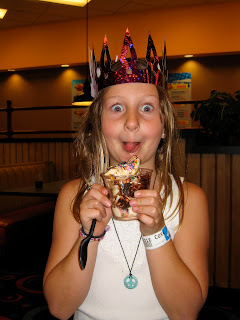 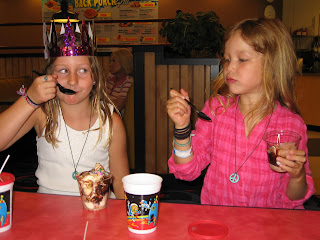 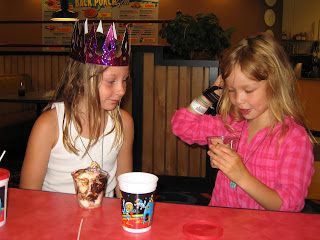 This morning was picture day.  And the thing about getting family pictures is that you are supposed to have matching(ish) outfits.  Now a days the rule of thumb is that they are supposed to be matchy enough that there are some common elements, but not so matchy that your family looks like an add for Jr. High school uniforms.

So that was the first problem this morning.  In the past, we have always been able to pull some stuff together where you couldn't pinpoint a theme (oh, it's the year of denim!) but we complimented one another.  This year, not so much.

You see, this morning as I am going through Shelby's closet, I can see a couple big problems.  The first is her love of tank tops, where that is all that she has hanging in her closet, and these are supposed to be fall looking pictures.  The second issue is her love of animals, and the fact that she has been given more say in what she wears, hence every shirt she owns has a kitten, bird, dog, or some combo of the three.  Not so great for family pictures.

Third issue, and this is a constant...she only has pink in her closet.  It's kind of my go-to color...but for pictures, I am getting kind of sick of it.  Plus, no one else has pink to wear, so I was hoping for something a bit more muted for her.  But unless I want a tan tank top with a pug puppy or a white short sleeved shirt with peace signs all over it, pink is what we are getting this morning.

Garrett presents the next issue.  About the only thing that he has worn for the past six months are Cars t-shirts and shorts.  I was hoping for pants and a button down shirt for him.  As I am in the bathroom trying to breathe some life in to my hair, Gavin is atoning for sleeping in, by ironing and getting Garrett ready.

I gasp when I walk out of the bathroom to see that Garrett's pants are two inches too short, his shirt barely covers his belly, and Gavin has put some checkered shoes on him just to give it the final touch.  OK, this kid needs his wardrobe cleaned out STAT.  But until I have the time to do that, I have got to find him an outfit that doesn't include Mater or Lightening McQueen.

Dalton is feeling pretty hip in his button down shirt, black jeans, and Vans.  Gavin and I are scrambling.  We are running late.  My outfit choices are limited because most of what I wear consists of jeans and some obnoxiously graphic T that will hide all the spills and stains of the day...not exactly picture-worthy material.

We all end up getting clothed...but we are about as cohesive as the floor of Congress.  I have a gold tank with a forest green cardigan, belted by an Indian belt with plaid cigarette pants.  Gavin has on tan courds, and a gray button down.  The outfit that Garrett ended up in was an orange and blue plaid shirt with khaki's.  Maybe we can request that these pictures come in black and white.

Although I guess this IS more true to life.  It's not like we walk around color-coordinated.  Luckily the morning was not so hectic that from now on I'll have negative association with these photos, which is the story of the majority of our professional family photo shoots.  I didn't have to threaten death or divorce to any of my family members.  I didn't do the scary Mom face or yell (too much).

I just bribed.  For smiles Dalton would get thirty minutes on his new long board even though he hasn't finished paying it off.  Shelby would get "more" time with her BFF Hanna (whatever that meant).  And Garrett asked for time with his friend Owen, which we agreed to, and then of course did not follow through with when he forgot about it three minutes later.

Later in the day I took Shelby and Hanna to Boondocks.  It wasn't as bad as I'd imagined it, although the drive down did suck.  I took a wrong turn on some frontage-ish road, and ended up in tract-home hell, driving along the shoreline of the old Lake Bonneville, where I was sure that pretty quickly I was going to drive right over the top of the mountain and end up in Utah Valley.  Luckily I escaped and made it back to Boondocks.

The girls decided that they wanted to do mini-golf, which wasn't the worst of the options.  I think that the worst of the options would have been a tie between laser tag and the bumper boats.  Sadly, they were too short for bumper cars, as that actually sounded pretty fun.   The girls were pretty good at the mini golf.  Although this course was not nearly as good as what I remember Trafalga being back in the old days when I was a kid.

That being said, I may be mixing my nostalgia from childhood with a scene from the movie Overboard where Kurt Russell builds a Wonders of the World mini golf course.

Then there were the tokens for Arcade games.  The ski ball was the best.  They climbed around on some okay kid-zone.  But the best part of the day was the food court, when I bought the girls Make Your Own, All You Can Eat Sundae Bars.  The combinations were stomach turning.  As if soft serve is not nasty enough on it's own.  It got drenched in marshmallow sauce, caramel, sprinkles, Oreo bits, and several other flavors.  And since it was All You Can Eat there were several trips back to reload.

I let them start out with the sundaes before their meals came.  We ate our goo while we watched MTV on the big screens of the food court wall.  After the girls were done, they turned their tickets in for prizes.  The prizes there were not nearly as lame as I remember them at Chuck E Cheese's.  They opted for the Chinese Finger Traps, which still give me anxiety when I look at them, remembering the feeling I had of being a kid and realizing I was going to have to make do with eight fingers, because I had just succumbed to the lure and the sad destiny of the Chinese finger trap.

I saw that same terror in Shelby's eyes for two seconds.  It was then that I realized that I had no idea how to free the fingers.  I had probably gnawed out of mine like a wolf when I was a child.  Luckily Shelby did not wait until the car ride home to attempt the Chinese finger trap, so we had the expertise knowledge of the teenager working behind the counter, to let us in on the guarded secret of how to escape the trap.

I heard words like "Best Mom Ever, " "Best Day Ever" and "Best Thing Ever".  So, even though it was not my first choice of how to spend a Sunday, by any means, it was worth it.  It was to celebrate Shelby's friend's birthday party that she missed, because she'd already RSVP'd to another party.

The girls came home and rode their bikes up and down the sidewalks,  while Dalton longboarded  down the middle of the street, and Garrett stood on the yard with our friends and their two dogs.  The adults talked jabber, and then it was time for dinner and preparation for the week ahead.

Bummer for me I have a traveling husband with a paper and a Stats assignment due.  But that is why I am blogging...to put off the joy of those realities.  Boondocks anyone??