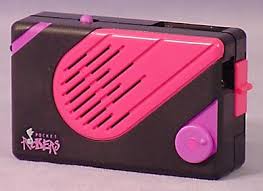 I'm on my way.  For the past couple of years I have been slightly handicapped in the world of technology.  I blame this on the fact that I was born in 1978.  You see, I was lulled in to a sense of superiority because I was one of the first of my friends to own a Pocket Rocker.

For those of you who had the sad misfortune to miss this special fad, it was a tiny Walkman that you could take around with you, so that you could play your teeny, tiny Pocket Rocker tapes whenever you wanted.  Because having to listen to Milli Vanilli, Debbie Gibson, or The Jets on a normal Walkman would have been kind of lame.

It was especially special because it was colorful, and the tapes were colorful, and truthfully the whole experience was colorful.  Yes, look at me, I am 14 and I am jammin' to "Manic Monday" just because I can!  I don't think it came with headphones, which must have made the experience really fun for parents, or anyone within earshot of this treasure...probably the reason for their eminent decline in popularity.

I seem to remember vague threats being made by my mother that if I didn't turn down Wilson Phillips I was going to be grounded.  I had to explain to her how special the lyrics to "Hold on for one more day" really were, and then she allowed me to continue to sing right along with Carnie and the gang at the top of my lungs.

Oh, and then there was "Ocean's Apart" by Richard Marx, and the blonde Nelson brothers, whom at this moment I can not recall what they sang but I remember that they were both WAY prettier than me.  So, pretty much what I am saying is how could you grow up NOT thinking you were special and leading all the trends when these were the gems you were listening to?

So, not only was I at a severe disadvantage because my generation was listening to neon-flavored-dung, but then I was lulled in to complacency because I thought, "It will never get tighter than this Pocket Rocker...I have arrived."  Of course I would not have said the word tight.  I would have said rad, or cool, or awesome...all of which I still use in sentences on a regular basis.

So, while I was hard at work mastering the Claw bang, and the perfect peg of my acid washed jean so that while I was playing four square on the playground it wouldn't come undone, others I guess were keeping up with the times.

Long story short, my kids are more proficient on the computer than I am and it's bugging me.  So, I am getting to know my Mac.  Sadly, I declined the Apple store's offer to do a class on how to work the Mac when I bought it, cause how much different could it be than the 3 inch by 5 inch Mac screen that I used to do typing drills on with my Grandpa?...apparently VERY different.

I have 71 copies of the same document saved, that I can only find on odd days of the week.  There are icons at the bottom of the screen that look like they can either create music videos, start your car engine, or give you a pap smear...I am not going near any of them.  I have just over 2,000 emails in my inbox...plus another inbox that I just figured out how to log in to yesterday.  Sorry family members that emailed me two years ago...yes- I am alive.  So- it's going to be a bit of an uphill climb, as I turn my Pocket Rocker off and put it down.

But, I am jazzed.  Hello 21st century.  Yes, I do know what a google group is!  No, my phone can not "bump it" but at least I know what that term means.  Oh yeah, you want to have me check my son's email account for his school- it's ON like Donkey Kong.  Sadly, it's a time-suck.  In order to get proficient at this (or anything) I have to be willing to sit down in one spot, stare at this screen for hours on end, not caring that my laptop is giving my thighs heat burn, and just stay at it until the light bulb turns on.

What someone needs to make is a Vitamin D sun light that shines on you while you're on your laptop and the hours are flying by, so at least you can pretend you're not held up in your house, loosing skin pigment and social skills by the minute.  We have family pictures tomorrow.  There is a part of me that would like to hurry and "do something" about the state I am in.  Dye the two inches of black roots to match the orangy, stringy mane that is currently the state of the rest of my hair.  Go to the tanning salon, to pretend like I have a healthy glow about me, instead of the sallow bags that seem to be a constant feature.  Put some eye drops in, put in some teeth whiteners.

But why?  Wouldn't I rather own the state that I am in?  Why fake it?  Don't I want to look back in ten or fifteen years and be able to say "Wow, I look beat!  I must have been working my butt off.  Gosh, what was I doing?"  And then I'll say, "Oh yeah, that was when I was doing A through Z, and somehow keeping all those balls in the air...and gosh, I should have taken it more slowly."  But I will remember this time in my life for what it really was- busy.  Full, and hectic, and loving, and ambitious, and stupid, and self-inflicted, and honest.  When I am sipping a Mai Tai in St. Barts with my tanned skin, and newly stretched face and stomach, I'll just look back at these pictures and smile.  "Those were the days."
Until then, it's game on with me and this tech age.  Bleached teeth can wait, I've got PTA emails to send and school assignments to access. 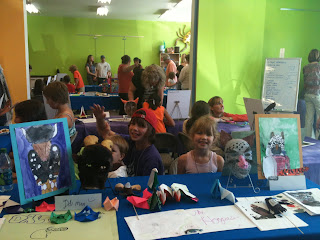 These are pictures from an Art Camp that Dalton and Shelby did this summer.  Dalton got his first girlfriend (gag) who gave him her email address that I promptly misplaced (oops).  They had a GREAT time. 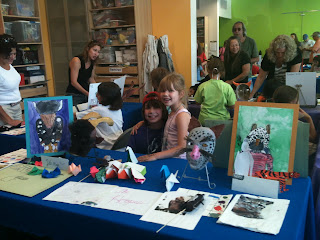 The art camp theme was Endangered Animals.  The kids made masks of their animals, watercolors, oragami, puppets, and did research on them.  The last day of the camp there was an Art Show where they presented their work to all the families. 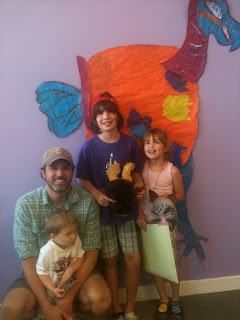 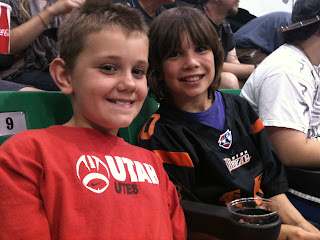 This is a picture of Dalton and one of his best friends, Luke, at a Blaze game.  My sis WAS engaged to one of their players.  That relationship is no-more.  But luckily, she has found the true love to replace it with, and that is her NEW JOB as MANAGER of our FAVORITE bakery- The Sweet Tooth Fairy!!! We can not wait to visit her and see all the yummy stuff. SWEET!! 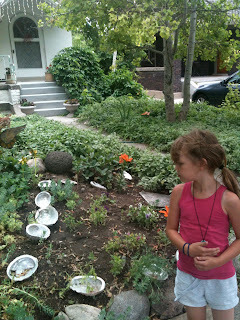 These are some random pictures from this summer.  We have some DARLING old houses in our neighborhood, where the people, let's just say wouldn't do well within a gated community.  The first one, Shelby was seriously envious of because throughout their yard they had "adornments" like shells and trinkets. 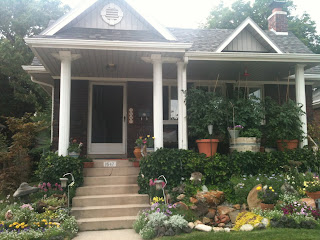 This second one is on our street.  The woman grew up in this house.  I have got to pick her brain some time about what it was like in this neighborhood when she was little.  Their house is like a gnomes cottage.  There are huge tomato plants growing on their porch, a fountain in the front, and koi in the back yard.

This morning I co-coached Shelby's first soccer game of the season.  She scored a goal...YAY.   That part wasn't the most impressive thing, as she was a fantastic defensive player and goalie.  But, each of those girls wanted to score a goal, so she was pretty jazzed.

She is now at a birthday party for a friend, and I am debating on whether to go pick her up early.  There is a crazy summer thunderstorm, where the thunder makes it sound like the lightening bolt is going to come down right on our house.  The power just went out over here.  Shelby is going through a serious "I-think-we-are-going-to-all-die-from-being-hit-by-lightning" phase that I am PRAYING ends soon.  I keep trying to show her how rare it is to be struck by lightning, but every time she sees the dark storm clouds I still find her curled up on her bed with tears on her face.