Literally, the only good thing about having your wallet stolen is getting to buy a new one.

I went here:  http://www.orlakiely.com/usa.cfm/accessories/aw11%20etc/overview
because that is where I got my old wallet from...that I love...and I am still bummed that I don't have it anymore.  You can wipe it down if you spill on it...it's from a Swedish designer who is darling...and they are not crazy expensive.  I got it from a great boutique in Boston that carries Orla Kiely way before it was uber hip.
I wonder what the person thought of me as he was going through my wallet.  I am seriously curious as to what the thief is like.  Is he a professional (I hope not, otherwise I am S.O.L. with my credit since my SS# was in there too).  Or is it someone who is seriously down on their luck, and this is their only way out?
I hope that it's the later.  There's a part of me that wouldn't mind playing the Priest to Jean Valjean in a sort of modern day reenactment of Les Mis.  Their kids needed to eat...their AC needed to be turned back on...gas needed to be put in their car....and all with my $500 (that they did an automatic with drawl from my debit card to get since lucky them I had written the pin number on a piece of paper in my purse).
I think that we have insurance with our bank...so we should be able to get that money back.  Unless there's an "idiot clause" for people who write their pin number on a piece of paper and have it right next to their debit card in their purse.
I wonder what they were thinking of me.  I had my U of U card in there...so maybe they assumed I was a student.  I didn't have my license in there.  I had like 100 business cards of everyone I would meet and intended to one day reconnect with.  Random....massage therapists, landscapers, artists, etc...
I had my kids' insurance cards in there, so I guess they would figure that I had children.  I had a Costco card...a library card...nothing too sexy.  I wonder if they felt sorry for me.  A boring Mom.  Next time I am going to write a note in my wallet that gives my thieves a bio about who they are ripping off.  Maybe it will make them think twice...or maybe they'll just feel a deeper connection with the person they are ripping off.
But enough of my stupid pity party about my wallet.  Here are some pictures from this summer that were from an event that was truly important.  It was a walk for kids with cancer.  Our friends have a darling son who had throat cancer last year.  It was terrifying, and hard, and miserable for them.  The walk was empowering for our our friend's son, and all of our kids.  It was a sunny day, everyone was upbeat.  We took turns holding a big sign with our buddy's name on it. 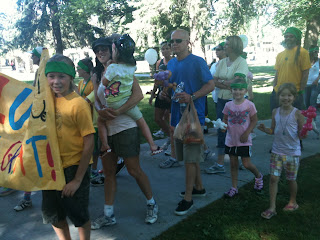 This picture is from a ceremony they had before the walk where they honored the kids with cancer.  They set a balloon free in to the sky for every child who had lost their battle with cancer and had passed away over the past year in Utah.  It was heart breaking.  And then it got even sadder.  They had the kids who are in treatment right now for cancer come up on stage to say their names.  And they just kept coming, and coming and coming.  There were some of the tiniest, most darling little kids you've ever seen...wearing masks because their immune systems were so compromised, with their trademark chemo-bald heads...most being carried by their Mom or Dad (aka: amazing warriors). 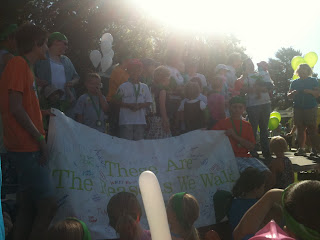 Thankfully our friend's child's cancer is in remission...after weekly chemo treatments for a year that were unbearable, and lots of trips to the hospital for tests and procedures.  He just had tests today and they came back clean!  He is still healthy.  We walked to celebrate his health, and raise money to fund research.  Childhood cancer is the definition of evil, in my mind, and it takes the most vulnerable and innocent among us. 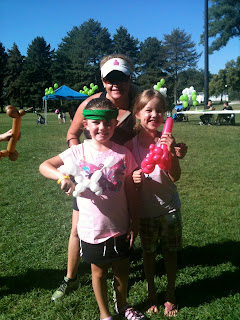 Garrett didn't last for the entire walk.  He found the firetrucks, and dragged his dad off to go see them.  On their way they found the face painters...and the guys dressed up as punk-animals (they were weird but the kids thought they were cool) and the treat table.  We met them when we'd finished the walk.  It felt good. 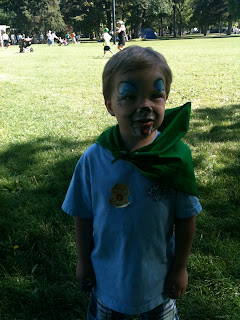