I am sad that summer is over.  Just one more week and the kids are back in school.  Not just them, but me.  We'll have some serious schedules and early mornings.

Dalton is starting a new school that we are excited slash nervous about.  I keep hoping that it's not too much for him.  It's pretty much like going in to Jr. High in the fifth grade.  There are six periods with six different teachers every day.  It's with sixth, seventh, and eighth graders.  I keep hoping that the pros outweigh the cons.

As for Shelby, can I just admit that I wish I would have kept her at Challenger instead of moving her over to our public school?  I wanted to be such a cheerleader for our public schools.  Dalton loved the switch.  He thrived at his local public school.  He had tons of buddies, played sports every day on the field, and had teachers who were amazing.  It was a perfect fit for his needs.  I don't know that it is the perfect fit now.  As he is getting older, I feel like he needs more creative outlets and instruction.  That's hopefully what the Arts Academy will give him.

Shelby, on the other hand, needs to be challenged and excited, and our local public school definitely has not done that for her.  My fingers are crossed that this year will be different.  There are things that I loved about the private school, Challenger.  I went there as a kid, so I had positive association from that.  And I love that they get kids so confident about reading and writing.  The cons are that they are incredibly conservative...like off-the-charts-tea-party-loving-conservative.  And I guess that's fine.  But it feels a little unfair to cram that stuff down kids' throats.

I guess if you teach your kids whatever you want at home, what does it really matter?...especially if the education is top-notch.  I loved that Challenger was incredibly diverse, because foreign families are drawn to it's rigorous academic approach.  The con was that the kids' friends would be spread out all over the valley...but now I am thinking "who cares".  Shelby has plenty of friends in the hood, and she'd do fine.

I just hate the idea of her being bored.  Hate it because it's what happened to me.  I switched over to public school in the second grade and it was like someone flipped the switch to the OFF position in my brain.  I don't think that it was the fault of the schools.  I think that I should have skipped a grade like the school was saying I should.  Or my parents should have put me in Spanish immersion so I was challenged in that way.

I think that we'll try Uintah, with Shelby maybe doing McKee Spanish Immersion after school?  See if that does the trick.  Start the guitar as well.  The idea being that in the fifth grade she'll move over to the Arts Academy too, and then hopefully they will all go to the Math Science Charter School for High School.

I just feel panicked about starting the rat race all over.  And it's not like I want to opt out of the rat race.  I get off on having twenty balls in the air at all times.  I just want to be in a yoga pose, meditating, while I have all the balls in the air.  Isn't that possible?

Regardless, my goal is to be more centered and more at peace this year.  Slow things down and take it easy.  Fingers crossed.


This picture is of the "shirtless guy" up at the G Love Red Butte concert, who was seriously jamming.  It was pretty cool- all that energy and confidence that this concert-goer possessed.  It made my friends and I want to jam right along...and jam we did!  Unfortunately, swooning over G Love and Trombone Shorty made me feel kind of old and depressed.  Even though G Love is five years older than me, I felt like a middle-aged lady compared to all the teeny boppers who were catching his eye.  Get over it, right?  I mean, what would be the point of catching his eye anyhow?...just self esteem, I think.  Just to think to myself, "I've still got it."  Lame I know, but true. 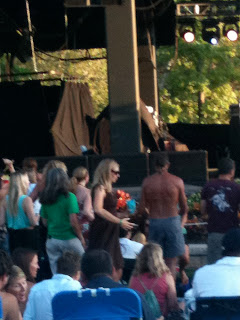 The kiddos and their BFF's went on a hike with Gavin and I yesterday.  We hiked up Millcreek Canyon. 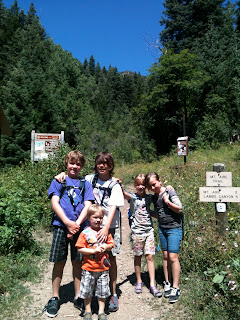 Shelby spotted lots of wildlife, including this black butterfly. 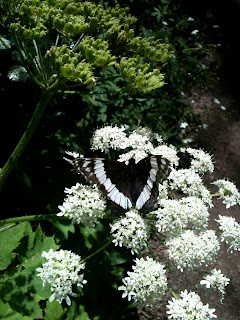 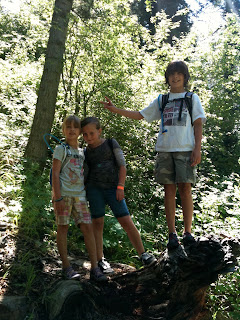 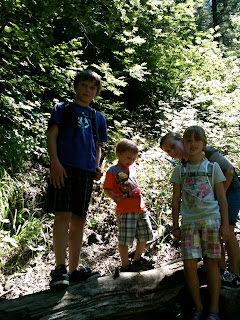 Everyone found walking sticks, including Garrett...who used his more like a light saber than a walking stick. 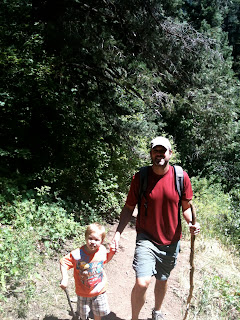 It was gorgeous.  Green, cool in the shade, wildflowers all over the place.  What a special thing that we have mountains like this right in our back yard that we can explore whenever we want. 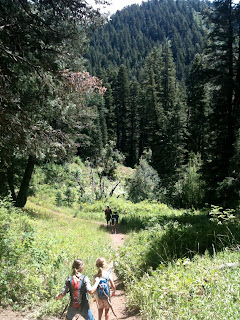 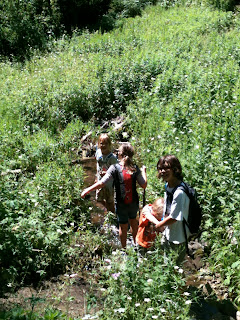 At the end we cooled off our piggy toes in the ice cold stream...feeling the slimy moss growing all over the rocks. 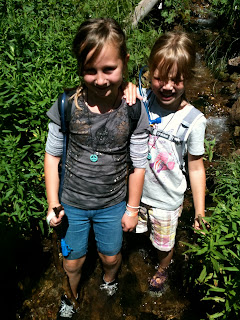 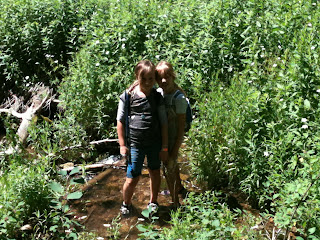