The end of June we took a road trip down to Arizona to visit Gavin's family.  All the siblings and their families were meeting up at the old "cabin" of the great-grandparents.  It was in a gated golf course community that looked like something off the set of Mad Men.  You could practically taste the gin and tonics that were had after long games of golf by the men and women in the club house while the kids were being entertained, forty years ago.  The kids all played outside and goofed around the entire time.  These are pictures from a "hike" that we went on one of the days. 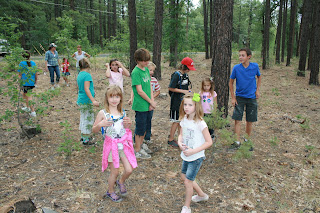 Everyone is all set to go.  My kids have their Camelback packs on...feeling very mountainy. 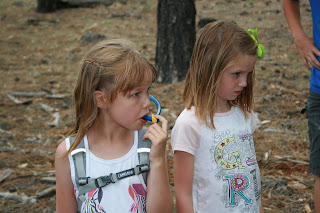 Thankfully Gavin set out rock markers along the way (which I later found out are named carins) so that we found our way back easily. 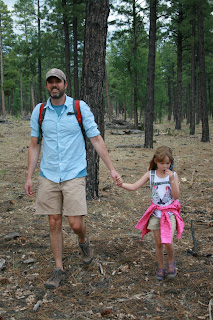 Doug tied some flags to trees too.  I think that he was playing it safe since the last time he'd come on a "hike" here he and his kids got lost, ended up having to walk to someone's home (this "hike" is on an Indian reservation) where they had to call to get picked up. 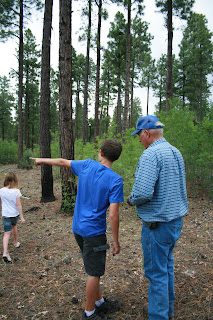 I didn't know it at the time, and I am glad I didn't, but I guess there have been a lot of bear attacks at Pine Top this year.  One of Gavin's Aunt's friends died just weeks after we were here from a bear attack.  Freaky. 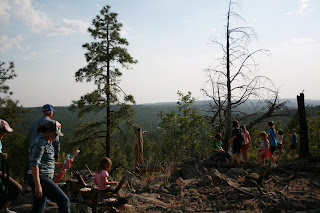 I felt like singing the old church song, "Pioneer children sang as they walked and walked and walked" over and over and over again because this was such a long walk.  His sister had claimed that it would be 45 minutes total.  It ended up being an hour each way.  Susan did the entire thing with a newborn strapped to her.  I guess we know who would have made the better pioneer in this family.   At the end of it the view was pretty.  You could see beautiful tree covered ridges that stretched far in to the distance. 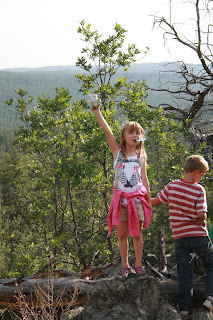 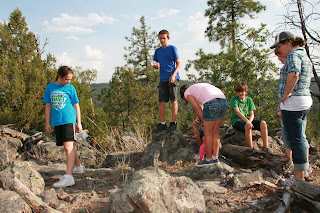 The kids poked around at the ridge, got yelled at not to get too close to the edge, shared some snacks, and then we took some photos. 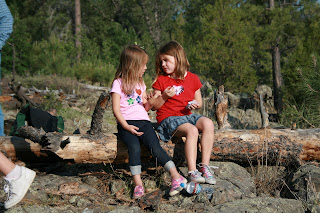 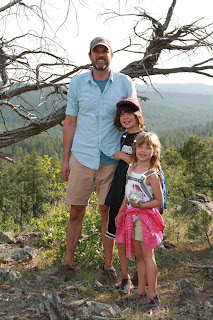 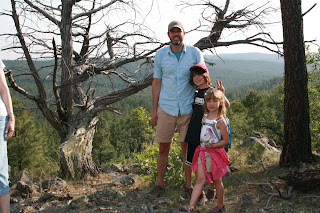 I love this cool old dead tree in the background.  I think it was when I saw the photos from this trip that I decided to go back to being brunette. 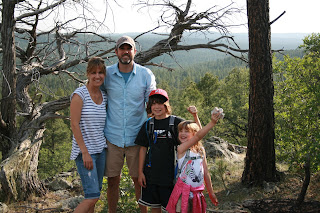 Here are the kids with their Grandma Martha, Gavin's mom.  Oh, I forgot- Doug told the grandkids a story when we reached the end of the walk.  I can't remember all of it.  Just that someone died near the edge and how settlers and Native Americans both did bad things to each other.  I felt weird that we were trespassing on a reservation.  Thankfully, it all turned out fine. 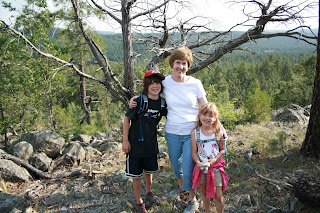 The morning of Gavin's birthday, June 29th, he went fishing with Dalton, Ali, and Jackson. 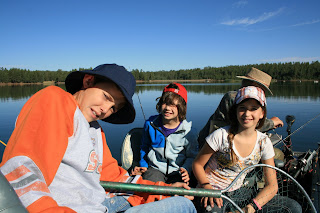 They caught a ton of trout, which we ended up eating for dinner that night.  It was so delicious.  Seriously the best fish that I have ever eaten. 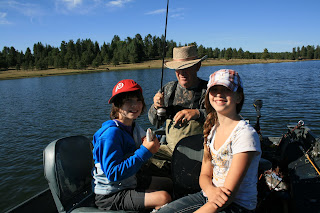 They had stories to tell- Dalton caught the biggest fish...the boat caught fire...lots of fun. 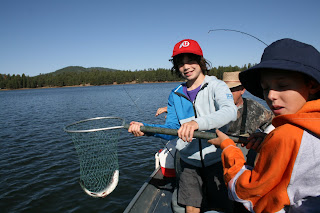 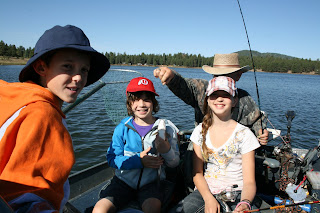 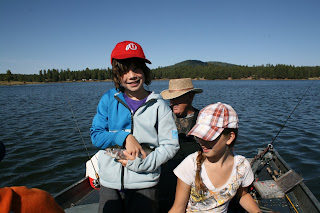 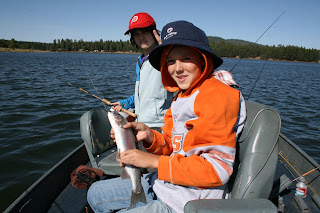 These were some fun memories.