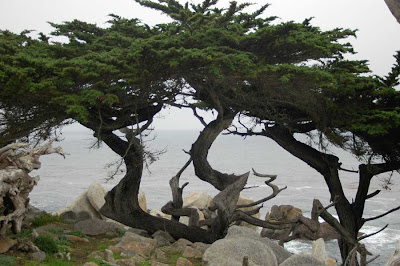 I wanted to write this down, before I forgot about it.  It was our last day of our San Diego trip.  Garrett was climbing on the Cyprus trees like he loves to do.  He got off the tree and was walking on the planter bench that they have around the tree, when he slipped and fell off, on to the ground below.

He fell flat on his face, and I rushed over to him thinking that it was going to be hurt.

I wasn't the only one.  I am used to his brother and sister being concerned for Garrett.  But right at the moment that I rushed over, a swarm of cousins descended on Garrett to see if he was OK.  I scooped him up and held him in my arms, examining him and making sure that there were no injuries.  He was fine...just shaken up.  When I looked up, the cousins were all gathered around us, reaching out to pat his leg, or softly ask, "Are you OK Garrett?"  I got a frog in my throat.  It was so touching.

To have this group of people who have your back, and genuinely love you...what a gift.  I think that Garrett was kind of shocked too.  He looked up and I told him, "Look, Garrett, all your cousins want to know if you're OK because they love you."  He got kind of shy and just smiled. 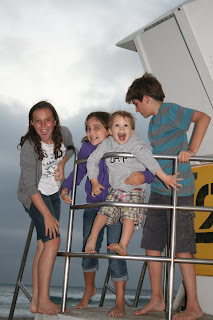