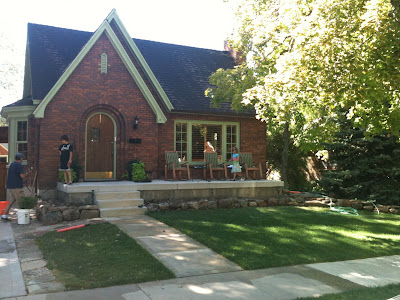 I shouldn't really confess this.  I don't know why.  It just seems like people don't talk about wanting to move until it's kind of a done deal.  Maybe there's an old Jewish superstitious core at the heart of all of us.  It's not that I want to move...it's just that I want my house to change.

And it could.  We have talked with several builders and architects about changes that could be made to our house.  It could stay a charming little tudor on the outside and inside we could blow out all the walls, make a nice eat-in kitchen, and have the best of both worlds.

There are a few things though, that could not change.  One is the size of our lot.  I just have to stop right here and say that my darling just-turned-three-year-old is digging in our front flower bed, looking for his "friends" the potato bugs.  They keep escaping his grasp.  He just lost one, and he said, "Crackers (he thinks that's how you say "crap") I just lost my friend...oh, crackers!"  Love this kid SOOOOOO much.

OK, so back to my house.  We almost bought another house this past spring.  Like earnest money deposited, inspection done, and then there was the appraisal.  We were willing to pay whatever it was worth.  Unfortunately the appraiser thought it was worth one thing, and the owner thought another.  Guess in the end, the owner was right, because they sold it to someone for their asking price to someone who was willing to pay cash, and didn't need an appraisal.  That damned appraiser.

So we lost that house.  Gavin was not sad.  He actually didn't really even like the house that much.  I didn't love it.  But it had great potential.  The problem is that when you are spending everything you have on a place that still needs a ton of work, I don't know how realistic it would have been to have made the changes that I envisioned doing to the home.  In the end, it was disappointing, but we knew we could still fix up our house, or hope for something else to come available in the future.

Back to our house.  It is darling.  I am in love with this little treasure.  I can just imagine the history and the memories that have taken place within the walls over the past 80 years.  When we bought it, it had a really old furnace in the basement, and there was a little sticker on the side, with the methodical record keeping of some previous owner, showing how he had maintained that furnace every six months, like clock work.  Bless his heart.  You can feel a lot of love within our walls.

But it's on a small lot, which all the homes are on our street.  And the street is a bit busy.  I mean, not really.  It's not a main thoroughfare by any means.  It's just that it's a long street, so it gets a bit more traffic than some.  And there are some homes that have renters (the ones on either side of us), which means more cars.  I mean, it's not the end of the world.  We could live on this street forever and be very happy.  It's just that I wonder if it is smart to sink a ton of money in to this street.  I don't want to live life with the worry of resale looming over my head, but it is smart to do things that make financial sense.

I bet if the houses on either side of me sold to new home owners, I wouldn't even think twice about staying and remodeling...which they probably will in the next year or two.  The lady on one side of me just died at the age of 95, and her 75 year old daughter who lives out of state has told her tenants she'll sell it soon.  The other house is owned by a retired woman who spends most of her time in St. George now, but lets her college age grand-daughter and her friends use it.  She has said that if we remodel, she'll sell.  Our street is only going to get better.  Our neighborhood is only so big.

The location is pretty dang perfect.  We walk to the market, to the pharmacy, to school, to the playground, to the restaurants and diners, to the bookstore, and to our friends' homes.  It's pretty ideal.  It's a flat street, so the kids ride their rip sticks and bikes down the middle of the street.  There are tons of kids on the street, which is also nice.  It helps that Shelby's best friend lives right across the street.  Some of my best friends live just a house or two away.  I don't know...why do I even want to mess with such a good thing?

Well, here is why- there is a house that is two blocks away from mine that is going to be for sale soon.  I am friends with the realtor and he let me know about it.  It is dog ugly.  It has no curb appeal, which in this neighborhood, is rare.  The thing is that it was on one of the later streets in the neighborhood to get developed, which means that the homes are from the 1950's instead of the 1920's.  Instead of the street being lined with darling tutors or bungalows, it is lined with post-war boxes.  Those are definitely not my favorite types of homes.  However, here's where it's golden- the lots on this street are twice the size of the lots on mine.  And it is a flat street like mine.  And it is right next to the neighborhood park, which we live at.

I want a two story.  I want to see the mountains in the morning out my window.  I want a big eat-in kitchen that opens up to the outside, where we can entertain.  I want energy efficiency.  That is one thing that we could do with this home, that we could not do with ours, because of the tutor's brick-on-brick construction that make them absolute energy suckers.  We'll see.  I am not going to put much energy in to this at this point, because with the energy that I spent on that other house that fell through, I could have solved the issue of world hunger.  Seriously, what a brain drain, and for what?

I tried to sell Gavin on the idea last night.  Surprisingly, he was pretty open to it.  We had talked about holding off on doing anything until next year because I go back to school full time in two weeks, and it would give his stocks more time to go up in value.  But he's all, "Sure, let's go look at it."  I am hoping that he's not saying this just so he can unmute his show that's on TV.  Because I think that's what happened with the last house, and all of a sudden it's time for him to sign the earnest money check, and he's all "Whoaa, when did I agree to THIS?"

We looked at some architecture online to see the types of homes we could put on the lot.  We both like the idea of mixing the looks of old, with some modern twists.  We would both love for the home to be uber energy efficient.  And we like an open floor plan, after living in the land of little charming rooms for the past five years.

The truth is, once I figure in the costs to redo this new house, we could get a magnificent older home in our neighborhood.  But, then we're back to small rooms, and small lots.  Who knows...who knows?

OK, now it's off to change out of my robe and in to some clothes for the day.  It's only 10 AM. :)  I'll drive by the house a time or two, go get Garrett some big boy underpants and some giant truck to bribe him with for potty training.  I'll go by the bike store to see if they have any commuter bikes for me to use to ride to school this fall.  I just gave my mountain bike to Dalton, and he loves it.  And I am going to "give" (but not really) my beloved Electra Amsterdam bike to Gavin who just wants to pedal around  here (shown below...is it not the most gorgeous bike you've ever seen?)

I need a bike that has way more gears so that I can get around campus and the 9th & 9th area with ease. This is the one I want, below.

Book group tonight up at my friend's cabin at Solitude.  The book was Loving Frank, and oh my gosh, will it be a juicy one to discuss!  Kris is making her signature pineapple upside down cake with cardamom and Kate is bringing Ruby Snap (formerly Dough Girl) cookies.  It will be a sweet night indeed.

My poor Grandma fell and injured herself.  She didn't break anything, but can not move herself.  She may have to go to a rehabilitation center.  God help me that I never get old.  What torture...being trapped in some old dying body, while you are still young and smart as ever.  OK, off to start the day.