A week or so ago Gavin and I went to Red Butte for the Lyle Lovett concert.  That guy is so cool.  I used to wonder how on earth Julia Roberts could be married to him, but now I get it- he rocks. 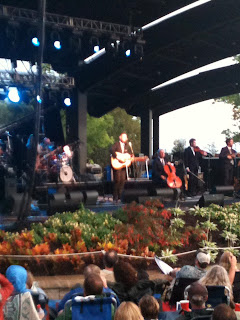 Speaking of someone you appreciate the more you get to know him...this guy: 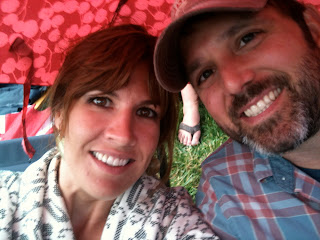 I am so glad that I am married to him and that he is the guy that my kids call "dad".  Wow...what a catch he turned out to be.  He is truly the "entire package".  Thank goodness that I listened to his big sis and number one cheerleader, Karen, when we first got engaged and I was getting cold feet.  She told me how amazing he was...and over ten years later I finally get it.

I wanted to post a couple photos of what we've been up to this wonderful summer.  The kids have made their trek to the Shiver Shack for snow cones at least once a week.  Usually they are with a bunch of buddies, on scooters and bikes and rip sticks. 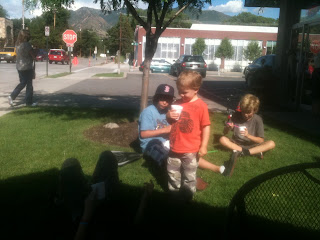 Dalton always gets the weirdest flavor combination he can think of and then winds up regretting it because it tastes funky.  Usually I take pity on him and trade him for mine. 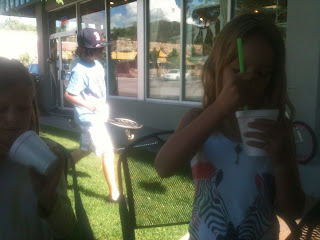 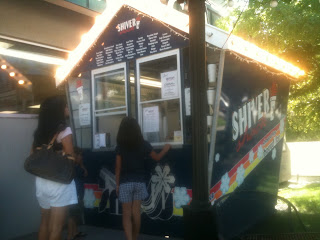 Shelby's BFF, Hanna, was away for a month of the summer, in DC.  We missed her A LOT.  You take it for granted when your favorite person in the world just lives ten steps away from your front door.  On the night that she came home from her trip, she stopped by to say hi to Shelby.  In this picture all the kiddos were piled in Sissy's bed to see our second sister, home at last. 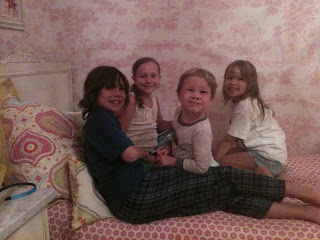 Our good friends, the Marceau's, who live down the street from us, gave us a rope swing for our tree.  Our kids have loved playing on it this summer.  With a bench next to it, it becomes the place for kids to gather and hang out. 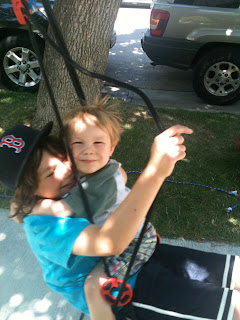 Dalton has been such a good big brother...to both of his siblings really.  He and Sis tease each other a little, but in my mind I'd rather have that than siblings that want nothing to do with one another.  He likes her, and she likes him.  I love that.  He'll let her follow him and his buddy to get a snow cone.  Her friends idolize him and love to have him join them in their playing. 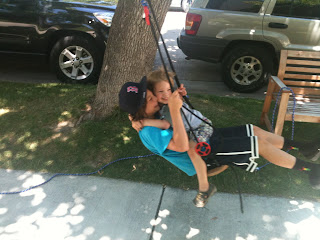 Garrett follows his big brother and sister around and thinks they are the coolest things on the planet earth.  It now makes me feel a little bad for Dalton, who had to follow me around- poor kid.  Dalton and Shelby are so good to him.  They really root for his successes and are sad if he is sad.  Dalton is so good to help me with him so that I can get some things done for a bit while they play together. 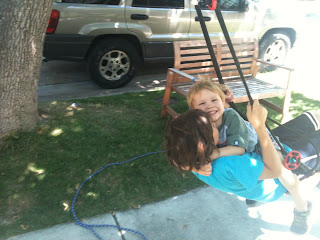 Garrett hugs Dalton so tight, some times it worries me that it's going to hurt Dalton's neck.  He gets his face right in Dalton's and just smushes their heads together...I think wishing that he were Dalton's Siamese twin. 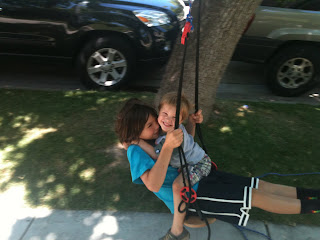 The big kids were cheering Garrett on this week while he got potty trained.  Now I realize that just because I typed that sentence out like it was in past tense, Murphy's Law says that he is going to wet the bed every night for the next year.  He has had two great days...and he is thrilled- as you can see by this picture of him in his big boy underwear. 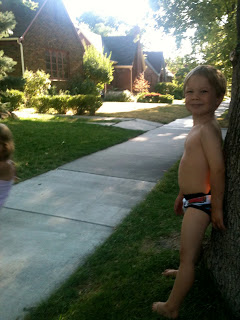 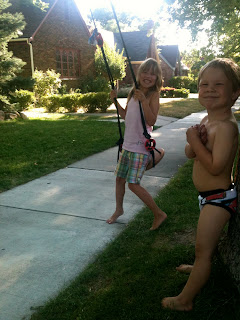 With both Shelby and Dalton we did the boot camp of potty training with that super old school book, Toilet Training in Less Than A Day.  It totally works...and super fast, but it's pretty intense.  You have to devote a few days to nothing but potty training.  And you completely give up the diapers.  There is no crutch with this program...no pull ups, no diapers at bedtime.  It's underwear all the way.

In the book there was a doll that pees and candy, and the little potty, and lots and lots of peeing which equaled lots and lots of positive reinforcement.  We did it all with Dalton and Shelby and they both had it down in few days.  With Garrett, I was a bit lazy.  I couldn't find the doll that pees.  Dalton had probably dissected it.  And I wasn't in the mood to go get a bunch of candy.  So instead, we did the Readers Digest Condensed version.  We still followed the book, but we also got a big truck from the toy store and made a chart.  He could have a sticker any time he peed, pooped, or woke up from a nap or bed dry.

The first day he had seven stickers.  But he wet the bed at night.  The second day (yesterday) was great- no accidents, and he woke up in the morning dry.  Today has been great too.  This morning he got his twentieth sticker on his chart and could open up his loot.  Here he is very happy: 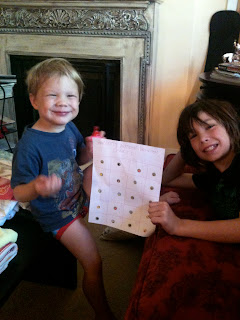 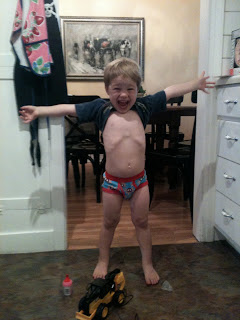 I was talking with a friend of mine and telling her that having my baby potty trained has been bitter sweet.  I love that he is big, and accomplishing these milestones.  I am having more fun with him with every day that goes by- as he gets funnier and smarter, saying and doing the most hilarious things.  His dances, his statements, his attempts to be big and copy the big kids.  But there is some part of me that is sad to see the diapers go.  Maybe not the diapers themselves, but the moments that we shared because of the diapers.

Even though it was less than a minute a couple times a day, it was time where I could stare in to his dark bottomless eyes and have fun.  We would joke, and I would make silly voices.  I would kiss his face.  He was a wiggle worm for sure...and it could get trying as I would wrestle him to get his diaper on.  But we'd have our little games where I would suck his belly, or his cheek, or he would flip on his belly and wiggle his little bum at me, taunting me not to bite it.

He would often grab my neck as I lifted him off the changing table, when we were done, and hug me with a big squeeze as I brought him back down to the ground.  It was quick.  As soon as those toes touched the floor he'd be off and running...but for a minute or two he was mine.

how funny--I don't remember you getting cold feet before you got married! I do however remember borrowing your little rayon dress that came up to my crotch when we went out to dinner in scottsdale with you, me, Marc and Gav. Both of us were wearing those floral mini-monstrosities that remind me of Goldie Hawn's hillbillie dresses when she's with Kurt Russell in OVERBOARD. :)


Can't believe you're having such a miraculous experience with potty-training little G-Force. Congratulations to you both!! He truly has more personality than anybody!

I strangely have a thing for Lyle Lovett, too. And Steve from Blue's Clues.

Karen, I agree about those awful dresses...they were the grossest. :)

As for the cold feet, it probably had to do more with the fact that I was barely legal, than with Gavin as a husband. I was so immature, I am surprised he survived those first few (10) years. Thank goodness he hung in there. I am the envy of all my friends.

And thanks for the congrats on the potty training. I think that being like the big kids probably has something to do with Garrett's motivation. He had been taking his diaper off for a week and going in the toilet when he could, before we had officially started. I just needed to mentally gear up for it.

Steve from Blue's Clues? Hmm, I'll have to check that out. How about the blue Wiggle Anthony, or the weird Russian gymnast, Sportacus, on Lazy Town?