Not sure why these pictures are so grainy. My whole stupid computer is a mystery to me. I have this kind of high techish laptop, but I feel like a Neanderthal when I use it. If only I had a job where I was paid to do something that would allow me the freedom to sit around and play with programs on the computer until I had mastered them.
I guess I could do that now, as a mother...just sit on the computer all day fooling around on it until I had a Matrix moment and all the pieces made sense to me...files were organized, duplicate pictures were banished to Outer Darkness, and my calendar synced with every other computer in the house... but I might be hauled away for child neglect because it would probably take 1,000 hours.
Anyways, so these are pictures from yesterday. 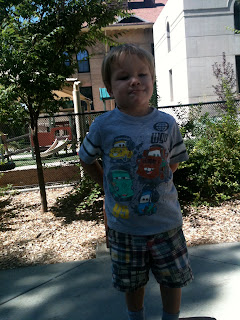 Garrett standing in front of his playground at the U's childcare center. He must walk out of there by himself, jump on to every one of the giant decorative boulders by himself, and walk at a snails pace through the tree covered campus by himself, until we get to our car. 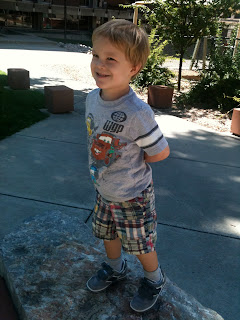 He is so proud of how big he is getting.  I am proud slash sad all at the same time.  Even though we are getting run over by students on their way to the next class, half of whom are on skateboards, and it feels like it's 103 degrees even though it's 95 degrees (no idea how my fam in Arizona or central California handle crazy heat because I am MELTING), and I am starving because it's 1:00 PM and I have not eaten a thing except my stale piece of gum since this morning when I found it covered in lint at the bottom of my backpack...I am going to drink it in with him.  Stop and smell the roses 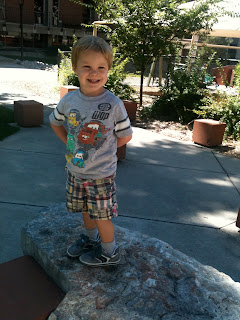 or say "hi" to his friends (lady bugs or potato bugs) or just talk about how he played with his buddies on the playground as I try to decode if when he said that Nafan (Nathan) hit him in the face it was because they were play fighting, or if I need to get in to his teacher's office ASAP for a little what-the-hell-is-going-on-and-how-could-you-let-an-abusive-bully-anywhere-near-him-talk...for now it's looking like it was a fellow warrior.  Note to self: may be skipping part of next class to secretly observe playground time from the bushes just to ease my fears. 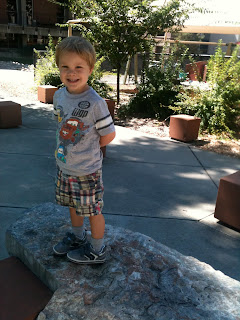 So, Garrett and I come home from the University of Utah...thank goodness just a five minute drive.  Was going to bike it with him, but with all of us needing to be out the door by around 7:50 AM a bike was just not working it's way in to the equation.  Sorry Earth, I did bring one of those cloth bags to the grocery store today...baby steps?  Garrett and I are home, then Sis and Dalton come home from their schools.
And right after they get home a delivery truck pulls up.  It's one of those trucks with the fruit-made-into-a-bouquet-pictures-on-the-side.  And I am wondering who the lucky recipient is.  To be honest, I always saw those commercials and thought, "Are you kidding me?  A) who REALLY wants that?  B) who REALLY sends that?  and C) as if people are really THAT happy when they get them!"  But you know what..it's true- people do like to get them and it is fun, and now I get it...I am a convert of the fruit bouquet company.  It was US.  We got a fruit bouquet...from our sweet sis-in-law in Arizona. 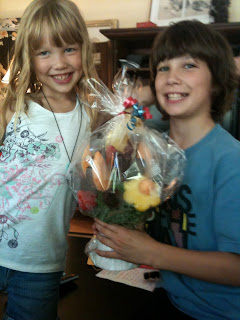 The kids thought that they had just won the lottery.  That's Garrett's little pig finger trying to grab a piece of fruit in the foreground.  They invited their friends over to oooh and ahhh.  They brought it outside to show the neighbors.  We each had a couple of the perfectly carved pieces of fruit...some covered in chocolate, some shaped in to flowers. 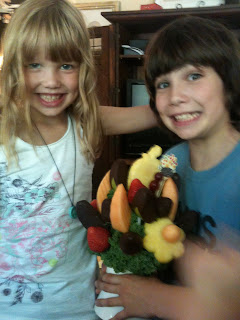 It was pretty cool.  But the best part was the note...that made me teary.  Because sometimes you forget how great family can be.  And how valuable their love and support is.  And it was a visible/edible/beautiful reminder of how good we've got it, that we've got the family we do. 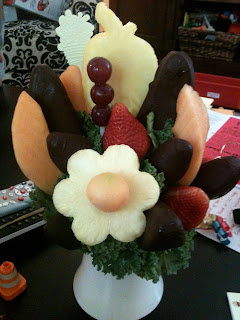 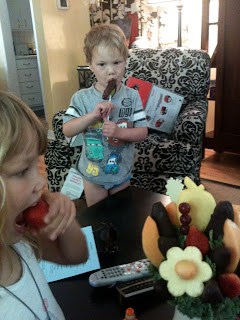 And here we have the proof.  It was an unexpected and very-much-appreciated gift.  There's Dalton trying on his lacrosse helmet for the season that begins tomorrow. 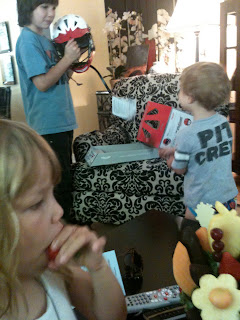 Afterwards Shelby and Garrett went out to the front steps to work on their collage.  Shelby's is of "cats"- surprise, surprise, and Garrett's is of how many millions of tiny pieces of paper he can manage to cut by himself. 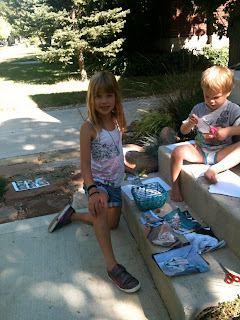 A good day for our family. 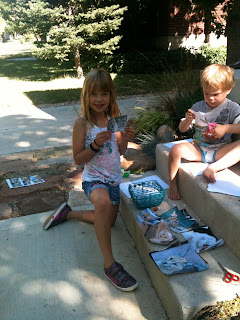 Email ThisBlogThis!Share to TwitterShare to FacebookShare to Pinterest
Labels: Ashley at the U, family

I swear I used to think those things were the tackiest things e.v.e.r. UNTIL my friend Cindy Hoffman sent me one--now I'm sending them to friends who have just had babies, my bro John for his birthday, SILs who deserve serious respect for tackling school and family and all they do (you get the point...)

glad you liked it. xo