So Gavin knows that I like chocolate. What can I say, he is observant. It's kind of how I observe that he requires air to breathe. Some dots just aren't that hard to connect. So, he comes home from his business trip with some goodies for me in the form of cocoa. Most are unusual..not your run-o-the-mill Hershey's stuff. Cherries and almonds in dark chocolate. Bittersweet chocolate with bahari dates, Lucuma fruit, and Himalayan pink salt. All with 55%-70% cocoa content. And then there was the odd man out, milk chocolate with caramel. Now, I have become a dark chocolate fan. It wasn't easy. Sometimes you can feel like you are chewing on a piece of bitter tree bark that just looks like something that is supposed to be considered a treat. But over time, my tastes changed, and the orange peel and lavender that was married through the dark rich chocolate hooked me. However, I must admit that on some days, like today, that milk chocolate with caramel was just the blankie and sippy cup that I needed. I mean, sure I know that I shouldn't like it cause it's not the real deal. It has more cocoa butter and milk powder than real cocoa, and it has the consistency of melted candle wax. But sometimes that chocolate flavored candle wax just hits the spot. 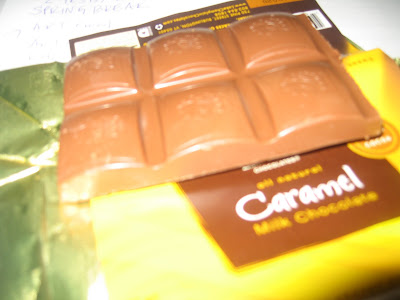 Shelby and I just walked back from our neighborhood market. Our neighborhood market that I love that drives me crazy. It drives me crazy because it does it all wrong. And why they can't do things right, I don't know, because doesn't everyone see the right way that is so obvious to me?! (HAR) Gavin told me that my nickname should be "The Fixer" because in everything I see, I see the opportunity for improvement and I want to make change. To me, that name reminds me of some sci-fi character, or the nickname of a violent gangster...one of those people who would cut your finger off and "fix" you up real good, if you forgot to pay up with the big boss. Ya, I don't think he meant it as a compliment. I feel stupid for admitting that I want to see change. Like, why can't I just be happy the way things are, and be laid back and cool, like every other normal person? But I can't. So, I will just admit it. I want to fix things. When I was younger it used to drive my Mom nuts. "Just mind your own business" "Worry about yourself". Easy for her to say. She wasn't up at night worrying about the crossing guard and how cold his hands must be, or the fact that your third grade teacher is letting people who have no vocal talent, sing in the school program. I mean, these are tragedies. They need solutions STAT.

We were thinking about renovating our house. Then we were thinking of moving to a different house. I mean, our yard is not that big, and do we want to be the biggest house on the street? I love our street, but doesn't everybody say that? I mean, you love it because it's what you know. We could probably love any street. I mean, it does have amazing 80 year old maple trees that create a canopy spring through fall with their gorgeous leaves. It does have charming brick tutors that line the street with their funky brick combinations and leaded glass windows. But the lots are so small that you can practically hear your neighbor singing in the shower, and the homes are small with little rooms which isn't great for the five months out of the year that you are trapped in the house because it is like Antarctica outside. So, do we stay or do we go? That is the question. And today I looked at a house for sale. Blah. Where were the trees, the charm?? Sure, there were a thousand more square feet than what I have, but is that the most important thing? Oy. And for me, it's location, location, location. Here's what I want: I need to be able to walk to the pharmacy/gift store, the funky diner, and the corner market. My kids need to be able to walk to school BY THEMSELVES. We need to be able to walk to the park. Be close to 15th and 15th with Caputos coming in, and The King's English Bookstore along with the Paris and Fresco. We need to be on a flat lot so that the kids can ride their bikes and play in the street with the neighborhood kids. We need charming houses. We need fun neighbors who like to visit late in to the evening out on the lawns with something to munch on and drink. We need a neighborhood where they like to keep their houses up, but they are not going to mind if you forget to mow your lawn one week..or two. And right now..we have all of that. The only thing that we don't have is a big fetching lawn. So, do I really care THAT much? I mean, they end up playing across front lawns anyways. Maybe it doesn't matter. I can just pretend we live in Europe..or Japan. Gosh, they would think have a palace of a yard. Who knows what we'll end up doing.

I want a MacBook Air? I think that's what it's called. It weighs as much as my phone but it organizes your life, and makes you smart and brave and funny. And I have to have it. Also an IPhone. Because if my 14 year old niece can have one, then so the heck can I. Oh my rantings and ravings and ramblings. Does any of this even make sense? Time for some more of my waxy milk chocolate with caramel. Thank you Gavin. SO glad you are home.


Oh, I almost forgot. I went to this forum at the Hinkley Institute up on campus last week. They had a few local mayors come speak to us. And there was this guy there who is the mayor for West Valley, who you can tell is just pining to be the Mayor of the Universe some day. His name is something-or-other-Winder, and he made it known that he hails from the royalty of the Winder Dairy family. At one point these wise thirty year old mayors were giving us students some really rich advise, and Mr. Winder's advise was the best. He said that he never sends an email, or a tweet, or a post on Facebook without first thinking to himself, "How would I feel if everyone saw this?" "How would I feel if this were shouted from the rooftops?" He said that in Joe Kennedy's famous words, "Don't write what you can just as easily say. Don't say what you can just as easily gesture". Really? I almost started laughing. I mean I get it. I know that words can come back to haunt you. Believe me I do. But say what you need to say with a gesture? Rethink every tweet..every post? I just don't have the mental stamina to be checking and double checking every thought that comes to mind. I could just say nothing. That's certainly safer...but so boring. 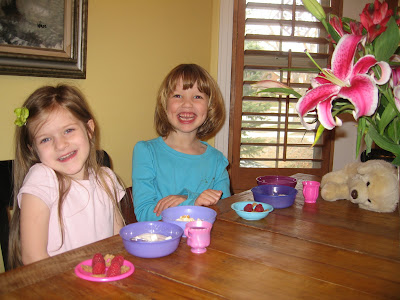 (photo of sis and her friend having a tea party)

Ha ha. I tend to be a "fixer" too but also ignore a lot of the things I could be fixing in myself because they are on my "I'll fix it later list" which means I have temporarily allocated that thought somewhere in my brain so I don't have to think about it.

Hmmm chocolate. That is nice that he brought some back for you. Except... I am the total weirdo that has loved dark chocolate to begin with. I wish I could have a crack at your stash. I was also the gangly five year old who couldn't wait for lunch so I could crack open my mini can of V8 juice my mom packed for me.

Your neighborhood sounds totally charming by the way.

Thanks for coming to the Hinckley Forum last week with the new mayors. Mayors Curtis, Johnson, Love and I had fun.

Sorry if I came across that cocky and that my advice maybe came across as lame. I do appreciate the opportunity to serve and to listen and to respond to student's questions.

Have a great weekend! Great blog.

is that some Lake Champlain Chocolate?