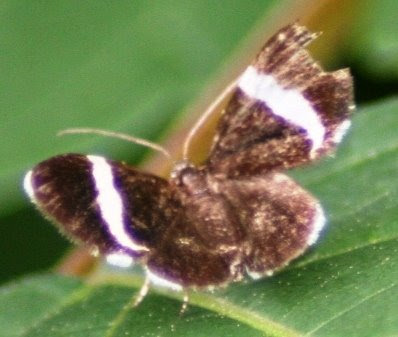 Shelby found a moth this week. She named it Polly (because her friend across the street had recently caught a butterfly and named it Polly). It was pretty darn cute. I must admit that I have been partial to butterflies in the past. Moths always seemed furry and gross. Didn't they eat sweaters while butterflies sucked nectar? But this little cutie had these big black eyes and eyelashes...I swear! She (of course she had to be a girl) was the size of a quarter and Shelby said that she'd found her in the driveway. She brought her in to show her to me. She was practically having an out-of-body experience, holding HER new darling "pet".

Now, whenever I see any living thing, be it a potato bug or a dog, being held by a child, my blood pressure rises. I guess it's because you can usually tell, if it's a young child, that the creature is being A) squished B) squashed or C) is being tortured in some other fashion like the pulling of the tail, or the pulling off of a leg. I know that this comes from my dad, who must have been a Buddhist in a previous life (that, or an actual potato bug). It is a wonder that we were brought up eating meat, the way that he preaches respect and love for all living things. Case and point, I come home from dropping Shelby off at school today, to find Dalton and his friend Jack smashing snails with bricks. You would have thought that they were Gestapo officers in Auschwitz, the way my heart sank. And then there was the look of joy on Dalton's face after he smashed it, that made me queasy. Is this normal for a person to delight in the killing of another creature? And what was the salt shaker doing outside?...must have been left out from our BBQ the other night. So, as I grab the shaker and head inside, Dalton follows me and grabs the salt shaker. "Mom, we need that." "Why?" "Because when we pour salt on things they bubble!" My heart dropped. I had to walk inside and close the door. Am I alone here? Is the torture of innocent garden pests and insects something that only the seriously mentally-ill obsess about?

Back to Shelby...so her motivation was the opposite of Dalton's, but unfortunately with a similar outcome. Have you ever read the book "Of Mice and Men"? She just can't help loving things a little TOO much. I kept telling her to put Polly back in the yard. I thought she finally had. Then she comes home from a play date a little later. "She is so funny with Polly," the mother says. I see Shelby with Polly on her finger. I don't remember her having Polly with her when she went across the street for a play date. Oh, that would be because she had put Polly in an empty Bubble Tape container and taken her to Hannah's house to "show her off". Polly was lookin' a little frazzled. For one thing, she was missing a leg. Her wings looked like they had also had a bit too much love. Shelby said that Hannah had dropped her. Again...my heart began to skip beats. I insisted that Shelby take Polly outside so that she could find her family. Shelby was heartbroken. "Polly hates me," she said. I knew I had over-reacted. "No, Polly doesn't hate you. You are like her mom. But now her mom has come back and wants Polly to be with her family." She set her on some dirt in the back yard. Polly didn't move. It looked bleak. After about five minutes of a Polly-less Shelby moping around the house, I said "Why don't you go get Polly?" I knew that this little moth probably only had about an hour of life left in her, so I figured that Shelby may as well drink it all in. "But doesn't her mom want her?" "No, her mom found out what a good mom you are, and said she could stay with you!" Shelby didn't look convinced, but she's no fool. She ran out to the back yard to get Polly.

I don't remember if it was later that day or the next day, but she comes to me with a dead little Polly in her hands. She is sad...but doesn't seem surprised. I think that I am more sad than she is. Again, how is it that I have no problem eating a hamburger, but I can feel sadness for a dead moth? I don't think it's the death that gets to me. Those smashed snails didn't know what hit them (pun intended). It's the torture beforehand. It's the fact that that little moth suffered. Did she? Do moths suffer? Deep questions for a night when I am not quite so tired. Long story short- Shelby and her friend Molly (the butterfly catcher) have given it up. They have decided that they should no longer catch wing-ed things. I am happy about that. I much prefer them in the air..