We are here...Melia Cabo Real 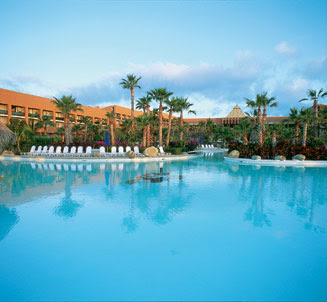 It's Dalton's Spring Break. And can I tell you that I am so glad that we came to Mexico. I have heard that Utah has been cold, wet and white, while we've been gone...and I was just not up for one more minute of that.

We have had a great vacation, with still a few more days to go. Started off bumpy...plane delayed a couple hours. Which, with Gavin's standard two-hours-early-for-every-flight-which-always-nearly-causes-our-divorce, we were there for a full morning before we took off. Good thing we had grandma, and the kid-play area, as well as Dalton's DS and Gav's Itouch to keep little people pretty well entertained. Ofcourse, Murphy's Law, the baby fell asleep ten minutes before we finally boarded, was awake the entire flight, and then fell asleep ten minutes before we landed. The plane ride was only survivable because of Grandma. It was a juggling act with Garrett, who like Newton's Law (or somebody's law) proclaimes; is always in motion. It was a three ring circus with Teletubbies holding his attention for a record four minutes, and every other activity lasting about one minute. Oh my gosh, I am getting anxiety just thinking about our upcoming plane ride home.
Change of subject...
So, we arrived, made it through the sea of time-share-sharks who ask you if you want a taxi, but what they really mean is "Would you like a taxi with a side of time-share?" Thank goodness Gavin speaks spanish. He has, over the course of the last few days, saved us a small fortune. I think that my mom and I must have "Gringo" written all over our foreheads in invisable ink that only the locals can see.

Any hoo, we make it to the hotel, and we are able to exhale...finally. The kids can run on the never-ending lawns, the hotel staff bring us margaritas as we check in, and we breathe the sea-air in as we gaze out at the ocean from the hotel lobby. We've been to this resort and there's a reason we returned to it- KID FRIENDLY.

There are families from all over the world who vacation here. It caters especially to Europeans. So, you see little kids, of all colors, running on the hotel grounds, knocking food off thier tables, having tantrums in the kiddie pools, begging thier moms for just one more soft-serve ice cream from the self-serve ice cream bar, and doing everything that YOUR kid is doing, which makes you feel SO normal and wonderful that you don't have to apologize profusely over and over when your kid acts like, well- a kid, because everyone else is in the same boat.

There's KID'S CAMP, which I can not say enough good things about. It's for kids of ALL ages. So far, Dalton has done water sports, zip line, pinata and games, with a disco that he is getting ready to go to tonight. He's met Diego, and James and a bunch of other kids from all over the place. He gets to come and go as he pleases. So, he'll hang with his family for a while until he's decided that we are too boring, and then he heads over to Kids Camp to check out what they are doing. Shelby hangs in the kiddie pool with Grandma and Dad, and all the other little innertube-dragging, floatie-wearing types.

My sister, Kristen and my step-dad, Dan, met us down here. We grab the same spot in front of the kiddie pool, every day. It's a few steps from the burger bar (kid you not), right next to the self-serve ice-cream machine, which is just steps from the swim-up-to-bar, and the jacuzzi. The temperature here has been 85 degrees every day, with a slight breeze. I slathered up far too much on day one, not nearly enough on day two and just right on day three.

LATER: bedtime now. Dalton went to the disco. Haven't gotten the run down yet because he is sleeping over at grandma and grandpa's room. Shelby is having a sleepover at Aunt Krissy's room and Gavin and I are having a sleepover with "little fatty" in our room- how romantic!

(I can not get the spellcheck button to work, down here in Meh hi co, so please pardon my inability to spell. When I return to the states, I will erase all evidence of this academic flaw.)

just one word: j e a l o u s.
(maybe not of the plane flight!?!)
I'm sure "Fatty?" will be so beat on the way home he'll snooze till landing.
prayers for that,
karen

You have to go to Gardenias for fish, shrimp tacos!! They are the best in the world. It is by the Marina Sol Hotel. Your children are really beautiful, I can't believe how big Dalton is! Amazing. Adios con amor- Aimee Pier

I think Im feeling the same way as your friend Karen.. JEALOUS! I would put up with 100 plane rides for a week in Mexico. Im so glad that you guys were able to go. When you get back and recover from the reality that you live in Utah give me a call and we will do that Sushi.

Thanks for the recommendations Aimee. It's so good to hear from you! And Karen, yes- Garret, aka "Little Fatty", did sleep the entire plane ride home...Phew! Lis, you're right...so worth it!