New tricks for an old dog 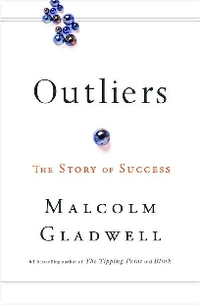 I liked the book Outliers, by Malcom Gladwell, for a few different reasons. It is a book about all of these random things that are actually not so random, like why kids born the first week of January tend to be more likely to be a professional athlete, or why kids who come from an area of China tend to do better scholastically, or why pilots from certain cultures tend to have more plane crashes. It makes you reexamine old ideas that you held as truths. And one truth that it shattered for me was the idea that some people are naturally gifted while others (me) are not. It is a "truth" that I learned early in my life. There is a particular scripture about talents, that I remember hearing a lot:

(from The Book of Mormon's Doctrine and Covenants section 46)

And so there was this attitude that some people were blessed with really great talents, while I was always consoled with "Ashley, yours is the talent to be a kind person," or "nice friend" or something that always felt like a Miss Congeniality Prize, when all you wanted was the talent of being able to speak in tongues or work miracles, or even, for some lucky few- all of the above! And so when I would loose all my tennis matches in Jr. High, or not make the drill team in High School, even though I had never taken a dance lesson, I chalked it up to "I wasn't blessed with that gift". But dagnabit, I did get that "sweet-spirit"gift...lucky me! And so it was this fatalistic attitude of "why try because if you were meant to excel at something God would have just blessed you to be naturally amazing.

And that is where Outliers comes in. There are some people who pick stuff up quicker than others, but to get to the point of being REALLY, REALLY good at something, EVERYONE needs to practice! It blew my mind. He shows several examples of people who are considered prodigies in their field, be it music or math, sports or science, and EVERY SINGLE ONE spent 10,000 hours of practicing!! There were ZERO exceptions. Not one person who was just a natural genius. And looking back, that makes sense. The people whom I admired in High School, as great athletes or academics, did practice a lot. I, on the other hand, would have been the one "practicing" my shopping skills at the local mall....sad. But, another great insight was that IT'S NOT TOO LATE. I still have a lot of hours left in my life (hopefully) and so there is still time for me to gain new skills, try new things and become downright talented!

And so, to make a long story short, I went skiing with Gavin and Dalton last Sunday. I am not a great...make that good.. skier. I can get down the mountain but it aint pretty. And all my life I've thought, "Well, I am not a talented skier. It's just not my thing." Not realizing that maybe the reason that "it's just not my thing" is because I have only done it a hand full of times in my entire life. And with a few of them as a child being downright terrifying, not-to-mention not having the money growing up to afford it as it is an expensive sport, not-to-mention the fact that I had lived back east with no access to skiing, not-to-mention being pregnant/nursing, on and off for the past ten years- it makes sense why I hadn't picked it up.

But, it's never too late. So, Gavin bought me a cheap pair of used skies that fit well and I went skiing with the boys. Dalton was bummed because he said "Mom skies so slow." (sad) But I was determined to keep up. And I did!!!! And it was fun!!!!!!!! And pretty soon I was weaving through the trees, doing these tiny little jumps with Dalton, and screaming with joy! I didn't wipe out, although I came mighty close a few times, but I was never scared. I looked pretty ridiculous, I am sure. In fact, people who passed me said "Man, I thought that you were going to eat it on that last jump!" And I was like, "Yeah, me too!" And I didn't give a hoot.

It was like the earth had shifted on it's axis for Dalton. Here is his mother, the one who is always slathering sunblock, checking for brushed teeth, making sure his helmet is secure, and now I am doing something Cool...something Fun? What the?? A few times he would just stare at me, his mouth gaping open, wondering who had hijacked his mother's body and replaced it with this different, not-so-lame person. Of course I had to cement my new cool image with chili, hot chai and brownies at Alf's Lodge afterwards. It was a good day.

And maybe in a couple more weeks, months, heck-even years, I will be a really good skier and look back at this and think "Good for me....for not being scared of how I look, or what other people think, or giving in to all of my self-doubt. Good for me."

Oh, and by-the-way, guess who looks really HOT when he skies?? Here's a clue- I am married to him! Yeah me. 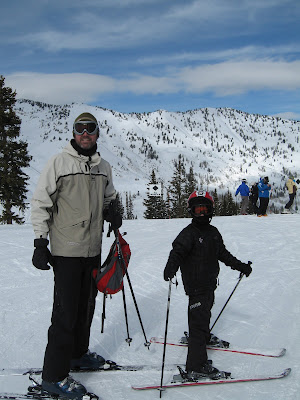 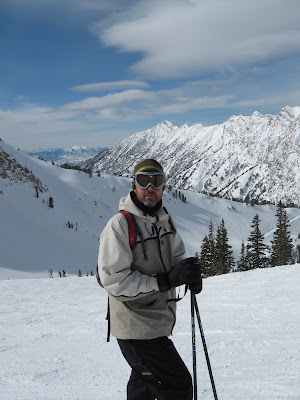 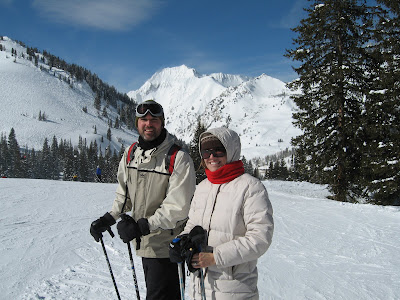 Good for you. I have to work at skiing and snowboarding too. :)

This reminded me of my adventures on the slopes. :) I think I went more than a hundred times during college...loved it so, I did.

I learned to snowboard the first year I was at BYU - all by myself. That meant I looked like a real fool for many, many trips to the slopes before I could make it more than 100 yds. without falling flat on my face. I even had to get a helmet - this was back when ski/snowboard helmets were super geeky, mind you - because I nearly killed myself falling on my head one time.

But you know what? After lots of days looking like a fool (and doesn't being by yourself seem to make it that much worse?), I somehow got really good! So much so that when one of my brothers came out to snowboard with me, he somewhat sheepishly confessed, "You're pretty good, Char." LOL.

So, stick with it! One of these days Dalton will sheepishly confess, "You're pretty good, mom."

Ashley I love that you are not afraid to try something new at any age and I love that you have embarked down a new road of skiing to create wonderful memories with your family. But for the record the talent of "Miss Congeniality" is not one to shun upon. I do believe that some people are born with natural gifts but when we have them all our lives we don't realize how special they really are. I want you to know what a huge difference you made in my life when I moved to Boston. Because of your outgoing personality and drive to make people feel welcome and included, you made a huge difference in my experience in Boston. You shine like a beacon and everyone flocks to be around you. I know I don't need to write these things to you but it seems appropriate to let you know when we such an enjoyable evening at your house last night. We really cherish your friendship and so do our children. Thank you for a fun evening and I can't wait to try the sushi place. Just remember though, 6 years ago when I first met you if you had played a concert piano piece for me that probably would have been the extent of our friendship. Luv you!

Way to go! Check out this link, http://www.youtube.com/watch?v=RhLlnq5yY7k
It kind of goes along with what you posted about. I don't believe that there are only, "sweet spirit," talents. I believe that everyone has incredible potential and can accomplish anything they set their mind and heart upon. The question is, how bad do you want it?