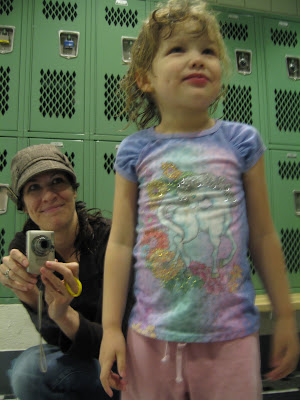 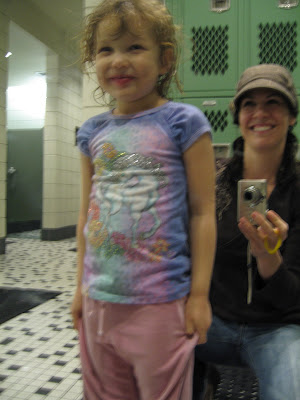 "What should we do for our mommy-daughter date?" I asked. I must admit that it would not have been my first idea for a Friday night, under normal circumstances. But these were not normal circumstances. Gavin and I were having a fight. This was going on day 3. It was to the point where we knew that we hated each other, but we were going about as if there were nothing out-of-the-ordinary, except the occasional scowl that we would shoot each other in passing. I have no idea how people live like this on a long term basis- continual, never-ending loathing. It is so exhausting. I would want to tell him about a deal at Circut City's closing sale, or ask him where the cough medicine went, but oh yeah, I hate him...so I can't. What a bother. If I were to tell you the root cause of the fight you would laugh. Really, that pathetic. And we don't do this often. We did when we were newly married. OMG. It was a war-zone. Or rather, a control zone. We were SO immature. So surprising, considering that I was the ripe old age of oh, 19! And I had never lived away from home. I know, it's really just a miracle we didn't kill each other. And because of this pact that we'd made we were considered "lifers". So, eventually we learned to get along. And it got easier, amazingly, over time. Little things just became not-so-important. And so I stopped obsessing about the way he did his hair, or what shirt he wore out to dinner, and he stopped "phoning it in" in regards to our relationship. And by and by we actually started to like each other...a lot! But that was not the case on this Friday night. And so I needed to escape, and Shelby and I had not had one of our Mommy-daughter dates for a few months. And what did she pick as our activity to do together? One guess...(here's a hint: it's the LAST thing I am EVER in the mood to do, ESPECIALLY at 6:00 p.m. in February when it is 30 degrees outside) but oh yeah, SWIMMING IT IS!!! We head over to Fairmont Pool in Sugarhouse where I don a pair of legs that really are in no position to be showing themselves for AT LEAST three more months. Shelby sports her ruffly swimsuit. And in we go. The water is warmish (I am praying not from the amount of kid-urine), and she's OFF! The problem is that she has NO fear, and she also has NO floaties. They aren't allowed in this pool. So I have to litterally stay two inches behind her at all times, constantly lifting her little head out of the water as she sinks like a little pink weight. She gets annoyed, telling me she can "swim by herself" apparently unphased by the three gallons of chlorine water that she has already consumed in the first five minutes. And so I keep trying to lure her to more shallow waters with games of "mommy dolphin/baby dolphin (where she beaches herself and I "god's honest truth" have to do an army crawl through the water, and up on to "land" where I then make dolphin noises (don't ask) and "rescue" the baby. The life guard especially liked this one as my swimsuit rode ever higher up my crack with every move I made. Then there were the games of tag, where Shelby gets genuinely terrified every time she is on the verge of being tagged, where she screams bloody murder. You don't know whether to hurry and "tag" her while muffling her (although it may appear that you are trying to abduct her) or run in the opposite direction to stop the screams. There is a great water slide at this pool that we went on OVER, and OVER and OVER again. That was great fun because we couldn't go down together (rules of the pool) yet she wouldn't enter it without me. So we would start out together, but then I would have to wedge her away from my body, shoot down the thing like a bullet out of a gun, to exit the slide with enough time to get my footing, turn around, and catch her before she plunged to her death. Oh, the excitement! After an hour we left and went to Whole Foods, which is across the street, for dinner. She was very impressed with their pizza, and I was equally thrilled with the caramelized onion, grilled chicken and wilted greens panini. We got deserts. For her, two pretty little peti fours and for me one beautiful jelly donut that they stylishly renamed a "Berliner" and a trifle (the swimming worked up my appetite!) And then we went home. Shelby told the boys of all the fun we had, and Gavin gave me extra scowls for leaving him at home with the baby.

update: I can tell you now, since we have made up, what that stupid fight was about: Gavin not leaving the kitchen when I asked him to. Can you believe it! Talk about two control freaks. I needed my space after a crazy day, and for some reason he had a need to feel like he could be in any part of the house he wanted to. Where it got sticky was when I got heated and backed him in to a corner (literally- the furthest corner of our house, in our bedroom). He told me to take a walk. Which I interpreted as F*** Off. When in reality, he was being sincere because that is what he wanted to be doing, and assumed that whenever anyone was feeling stressed they would want to have some space and cool down. Where, when I am steamed I want someone to lovingly embrace me and "talk me down off the cliff" so-to-speak. So, things got ugly (and by "things" I mean my language) and it took us a few days before we made up. Oh well. Not my best moment, but live and learn.