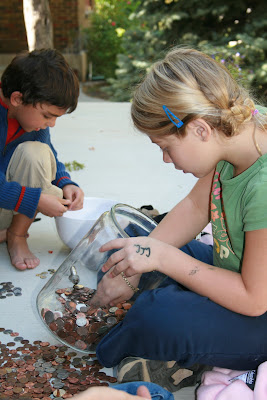 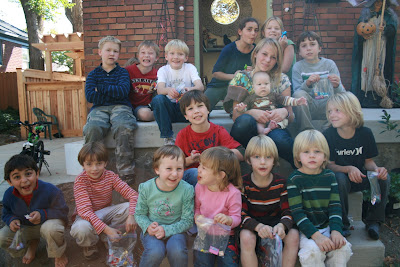 So, Dalton and I are on the Internet, looking for charities.

with the stipulation that :

So really, HE is not getting a raise, BUT... don't tell him that! He thinks that he is IN THE MONEY!
He picks Heifer International
He has $6 and some change to donate.

But unfortunately, the flock of hope is a little out of our price range, as is even a share of a pig. Yikes.

Scrolling down to fundraising ideas for kids, we read a
cool idea:
Let's DO IT!!
Email invite goes out. Dalton decorates a jar. Dumps his six and some change in. And goes door to door.


Three days later, there are 14 kids walking to my home, their backpacks heavy with change.
Around the kitchen table, we talk about what it means to be really poor. It's something that these plump-cheeked little grade school kids can't even fathom.
The longest they have been without food is the eight hours that they sleep at night, between dinner and breakfast.
We talk about what a pig would do for you if you were poor...
Well, you can sell the babies for money, and you can use it's poop to make the garden grow better
(girls:"EEWWW", boys:"COOOL!")
and you can eat them so you can get protein
(girls and boys:"EEEWWW!") Guess that pepperoni on the pizza isn't going to taste the same now.

They take turns dumping it in the jar, cheering for their charity. Hoots and whistles given for the kids with the most impressive "dumps"
We decide to guess the total.

I am a little worried. ..
A full pig runs a whopping $120 bucks! (The family gets training on how to raise the pig, along with all the supplies needed...SO neat!)
So, maybe we will just shoot for some
geese,

After the bets have been placed, the kids run off to

while a few "volunteers"
count the MOUNTAINS of change.
A lot of minutes later (and a few paper clips, nails, and other foreign objects that we had to weed out)
we had our total......drum roll please........

I love Heifer.org! You are so orignial. What a tremendous idea and learning experience for your kids and their friends. Wish I was your neighbor!

I like Heifer International. Our neighborhood every year does a bike or walk a thon to get the kids involved. You pay a small entrance fee and then at the end they gave some small prizes to the kids. My kids loved doing it. If you come up with any other kid friendly charities let me know. We have run out of ideas.

That is so neat that you did that!

hey that's a great idea. i'll probably do my usual copying of your ideas and take credit for being the neighborhood mom extraordinaire with a conscience for the needy. But today I'm just praying for minimal interaction with vomit. Jax and Ellison are so super sick.

I love it! Brilliant!

Ashley, you are an inspiration! What a fabulous idea and great experience for kids to learn to give to others. We would love to get together when you guys have some time.

I love this idea! Just this morning while I was showering (shocking, I know! I got a shower!) I was thinking that I needed to do something with my kids this month to help them realize how fortunate they really are!!!! Can I PLEASE steal your fabulous idea? PLEASE?