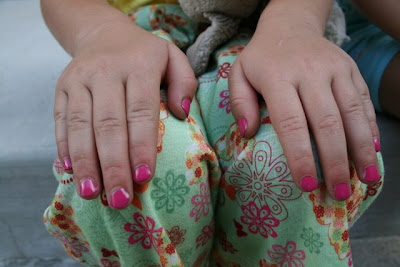 Dalton and the girls right before "lights out" 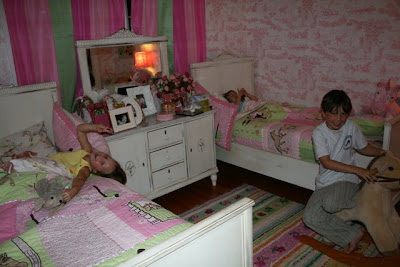 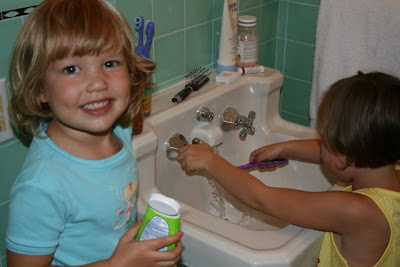 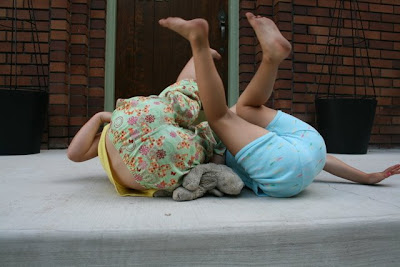 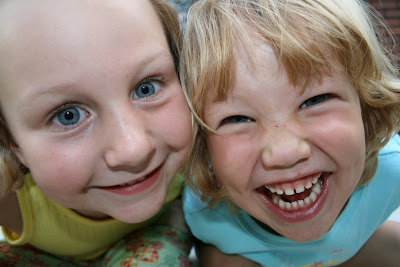 So Shelby had her first sleep over! She is so big!! Her brother Dalton had had like three sleepovers in a row with his super buddy Chandler, and so she asked if she could have one. We have some new friends who just moved in across the street from us. Their daughter Hannah and Shelby are two peas in a pod. Hannah got to spend the night! She walked over with her little backpack, filled with her pjs and extra ribbons (can't have too many of those). Gavin was out of town, so Dalton was the big boy helper.

We had steak and potatoes for dinner. Dalton entertained us by shoving a heap of potatoes in his mouth and then regurgitating them over and over. The girls laughed hysterically, which made him want to do it 100 more times. After dinner we had otter pops and the kids played tag outside. Shelby and Hannah got their toenails painted (which stayed on for all of about 4 hours).

Then we had a tea party. After that we popped popcorn and snuggled in for a movie party. The girls chose Scooby Doo, so I made Dalton pick the one with the least-scary monster to avoid any late night night mares. We played hide-and-go-seek. Dalton was really cute to help the girls find good places to hide. Our laundry chute is always a favorite spot!

After that it was toothbrushing. Isn't it funny how something as lame as that is fun when you are doing it with your friend! We picked stories out, and read them on Shelby's bed. We sang the song “Shelby, Shelby, bo-belby, banana-fana, fo-felby, me, mi, mo, melby...Shellllby” with all of their names like 5 times. Including our cat, Amigo, and our Gecko named Gecky. They thought it was hilarious!

They were so excited to climb in to bed. I think that they thought that something magical was going to happen. However, once they were under the covers, they quickly realized that it was MUCH more fun OUTSIDE the bed. So, they got out a few times. I put them back. Finally some bribe I used worked and they stayed IN their beds, but they chatted and giggled for an hour.

When I checked on them about an hour later, Hannah was conked out, and Shelby was fading. I was all prepared to hear the crying at 1:00 a.m., and have to walk Hannah home, but they slept through the night! They woke up at 8:00 a.m. The next day, and watched lots of cartoons, strung necklaces, had a big yummy breakfast, and played their little guts out! SOOO much fun!

You're a braver soul than I! No sleepovers (outside of family) until they're like 12. But you're the fun mom, and i'm not.
I left a whole big long response to your comments on my blah blah blahg and I won't be redundant and leave it here too. love you..
karen

I figure that now is the time to do the sleepovers, while they are still young and innocent. Once they hit 12, I think that I will ban them, as painting nails and having a tea party doesn't cut it. And instead, they are sneaking out, TPing neighbors lawns, watching late night shows, and who-knows-what else. Right now it's easy!

you are so sweet Ashley!! i needed that today!! so bad!! thank you!!
talk about cute kids! yours are beautiful.. there smiles are so big and cute!! What a cute mom you are and there bedrooms are to die for!! Your nursery for your little guy is amazing!! I need to come visit sometime when Krissy comes up!! your so cute thanks again for your sweet post!! :)

Thank you for what you wrote on my blog. It gives us comfort to hear that. You are so sweet to want to donate to them! Thank you! I'm not sure what's going on with the PayPal link but if you bank at Wells Fargo or Bank of America, you can donate there to the Christian and Stephanie Nielson Rehab Fund or the Stephanie Nielson Fund. Hopefully the PayPal thing will get fixed soon. Thanks again for your kind words and prayers!

Oh my goodness, how cute are you! But did I really expect anything less from you Ashley? As memory serves me correctly you were always planning the best parties in Boston! I was just wondering if you are ready to do it again this weekend? I have 4 kids that would just love a sleep over like that one!!

Um, Lisa- that is the pot calling the kettle black...YOU were the one with the BEST parties in Boston! :)

Oh, and ANY time your kids want to do a sleep over, Dalton would LOVE to have them over...as long as Wyatt promises not to flush any golf balls down our toilet, or swallow any loose change!! :)

You are voted the most fun mom! Ashley you are too cute! What a fun night for your darling girl. I LOVE Shelby's room. When we have a house of our own and Lily has her own room, I need your decorating skills! We are back in SLC so we will have to get together soon! I would love to squeeze that cute babe of yours!

first of all let me say thankyou thankyou thankyou for taking the time to set me up with an email address and teaching me how to access these blogs! it has been so fun going back to the beginning and reading about all of the adventures that have taken place over the past months. you and gavin are wonderful parents and the kids are precious. all i could think of was how proud i am of you and what a big heart you have. you are guileless and authentic (character traits of your grandpa). i love you

Thanks for your comment. Especially since I know that it probably took you an hour to type it. :)

Thanks again for a great Labor Day weekend!

Ashley, you are so brave to do more sleep overs, we have not attempted one with jocelyn, mainly because we have no room, but also cause we would end up having to take someone home at one in the morning. THe move was awful, why did you not warn me..Life is crazy but things are starting to settle a little bit. I have this cute little gift for garrett I am planning on sending before he turns sixteen, so look for it in a couple of weeks. Talk to you soon, we finally have a phone after ten days without it or the internet...I thought I was going to CRACK!! Take care