I marched in the Salt Lake City Gay Pride Parade today with my family and friends, and I have to say that it was one of the most spiritual experiences of my life. 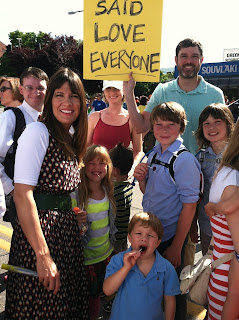 Dalton brought his best friend, Jack, and they threw lollipops to the crowd as they walked and waved.  They were smart (or maybe I should give Gavin credit for that), they had camel back water packs on which was really nice in the heat. 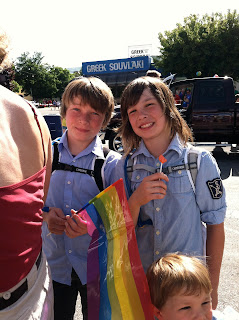 Shelby was in to the parade.  For her, she couldn't really quite understand what the problem was to begin with. Of course people like her Uncle David should be able to get married if they fall in love. 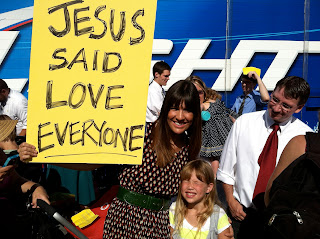 There were over 100 groups marching in the parade, but I chose to join my friends and march with the Mormons Building Bridges group.  Above, Shelby and I hold the sign that we made, next to my friend Travis, who is an active member of his ward in Sandy, and was in our ward with us in Boston, serving in the Stake High Council. The word had spread just two weeks before the parade, via facebook, about a group of mormons wanting to march together.  When the parade organizers heard about the group, they moved us up to the front of the parade, behind the Grand Master.  We wondered if there would be 20 mormons who would show up.  It was hot, it was on a Sunday, and it had not been advertised but through word of mouth. 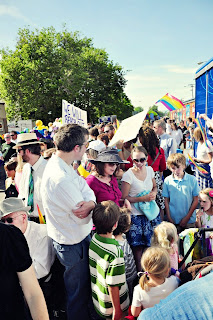 Mormons did show up, well over 300 of them, with more jumping in to join the group as we walked down the street.  These mormons came to support their friends, their brothers, their sisters, and others in their lives who have been shunned and mistreated because of their sexuality. 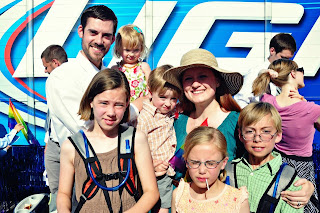 There were members of all stripes and stories, from youth leaders and bishopric members, to middle way mormons, to those that grew up in the faith but were inactive to those like us in faith transitions.  They turned up in their church clothes, to join in the march before or after their ward meetings.  They came with their strollers and their scooters and their knee length dresses. 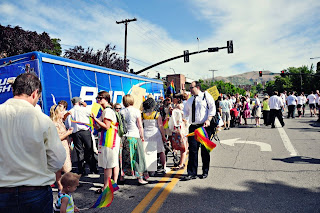 We lined up in the heat, ready to lead the parade.  When our group had been given the okay to begin, and the group started to finally move, it felt like the waters of a damn had been unleashed and my feet seemed to lift off the ground as I floated next to my brothers and sisters on a sea of shared hope. 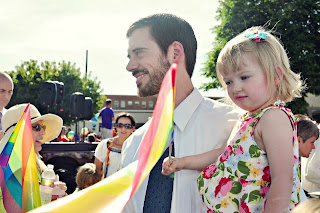 Parents, children, the old and the young, were all standing together with Christlike love as we marched to show our support of our gay brothers and sisters.  My friend Jared, and his daughter above, were filmed about their feelings.  He is a Professor of World Religions at a local university. 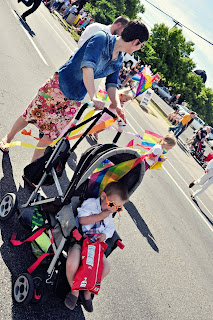 My friend Meredith, above, drove 30 minutes with her little kids, to make the march.  The question I had, as I passed the speedo wearing, boa covered groups, is "Would the community see us as friendly mormon families who wish for a future in the church where there is love and tolerance for all, or would they see us as sheep who are blindly hoping for change from an institution that has shown itself to be painfully slow on granting human rights to those who are marginalized?" 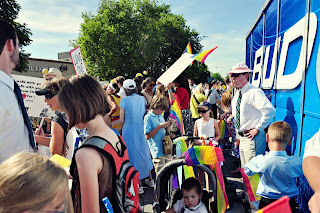 I had hoped that they would be able to see my sincerity.  I had hoped to give my love and support to them.  But I can not put in to words how floored I was to discover within the first city block that it was me who was being lifted up with the outpouring of their love and support for me. 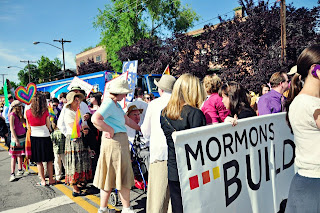 I had practically dragged Gavin out of bed this morning with him not seeing what was so important about this event, and wondering why his presence there was necessary.  But after that first block he put Garrett on his shoulders and I could hardly believe my eyes as the enormity of what we were involved in hit him, and his arms went up in loving waves to the community that cheered him and my flag waving three year old on. 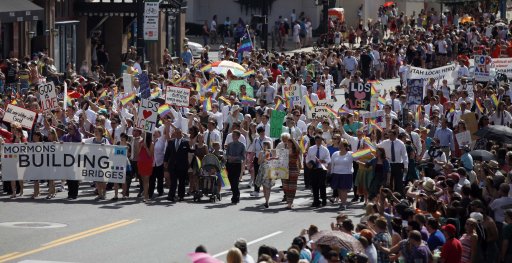 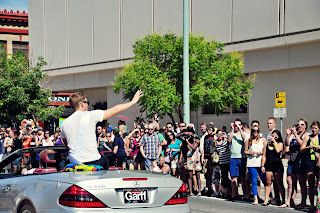 We were walking right behind the Producer of Big Love and Milk, Dustin Lance Black, our parade Grand Marshal. 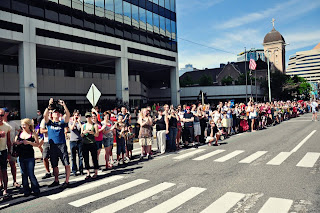 I had tears running down my cheeks as I held Shelby's hand in my right and my sign in my left, watching the old and young mouth the words "Thank You" to me and my dear sweet waving daughter.  She could feel their love and was lifted by it, offering to carry our homemade sign.  We held it together as we marched, until she finally admitted that her arm was about to fall off. 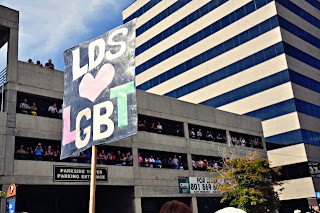 I guess that part of the reason that it was so shocking to me is that as a NON-OFFICIAL representative of the mormon church I was suddenly aware of how awful we've been to people who are gay, and I felt suddenly sick at what my church had done to these beautiful brothers and sisters of mine.  I was shocked at their willingness to forgive me and my religion. 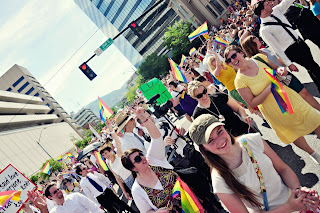 I watched as gay couples, old and young, held hands with their partners, weeping as they watched us, giving us the hand sign "I love you".   I saw mothers hugging their lesbian daughters, kissing their heads as if to say, "See, I am not the only one who loves you and accepts you."  I thought of my dear brother and all the anguish that he experienced growing up gay and LDS and how lucky I am that he survived his youth where he was constantly receiving the message that something was wrong with him. I almost physically could not go on it was so powerful. 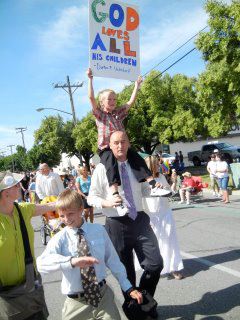 After walking for several blocks the parade was ending, and we were passed by a familiar face who asked me and my friends if we were with our kids and thanked us for coming.  It was the unbelievably modest and kind Dustin Lance Black, who we immediately asked to get a picture with. 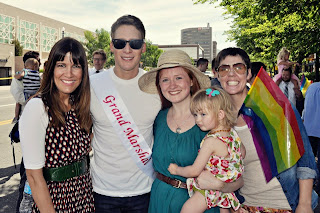 We hung out in the shade, all of us little mormon families, and remarked at what a joyful experience it had been, even with heavy little kids that weighed our arms down, and our sticky legs and arms that dripped with sweat as we walked. 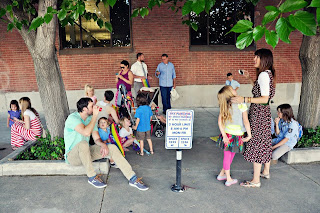 We shared what we saw in the crowds and the messages that we heard. 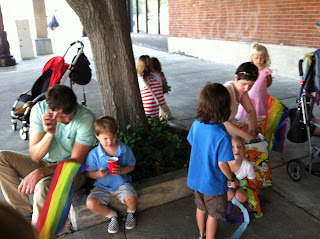 Some one said to my friend as she marched, "I forgive you."  That resonated with me, because that is exactly what was so touching to me, that she could forgive us...that she could forgive my church.  I don't know if I would have been as Christlike to another religion, if they'd denied me of my right to start a family and live in a sanctioned union with the partner of my choosing. 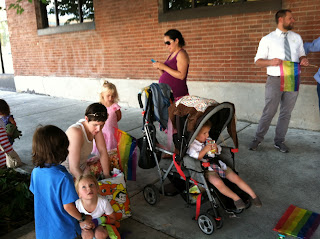 Dalton hugged me and thanked me for bringing him.  He said that he saw a lot of cool stuff. 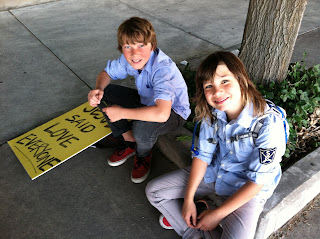 Shelby was my human rights warrior.  This girl's moral compass points north and even at this young age I can see that she is aware of when there is injustice. 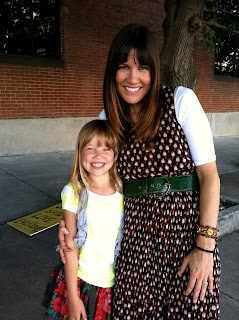 My sweet friend Katrina, my sister in Zion. 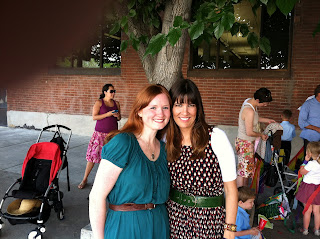 My eyes were puffy from weeping and my feet were tired from walking.  I was so glad that Gavin came.  Leaning on him is one of my favorite parts of our marriage. 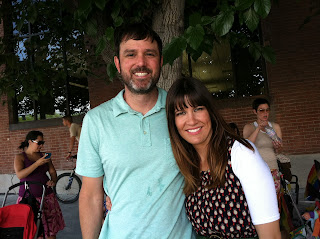 Afterwards we ate burgers and fish tacos at Squatters with our buddies, while we talked about the best parts of the day. 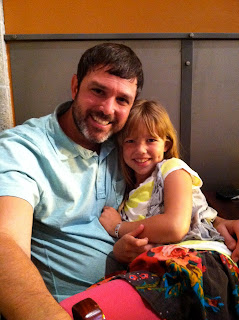 Dalton and his "other little brother" Ethan, hung out at the table, and the big boys let him smother them with his undivided attention and energy.  Gosh, my big guy is a sweet heart. 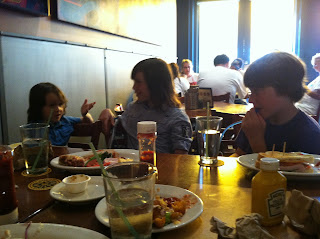 The two little ones climbed in to their dad's lap at the end of the meal. 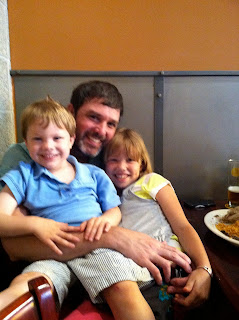 As we walked back to our parked car, Gavin and the kids talked about what they'll do differently for next year's parade.  Gavin said that next year we'll bring scooters for our kids, we'll have a wagon for the little one, we'll have a small cooler in the wagon with Otter Pops (that one may have been Shelby's idea), everyone will have camel backs, and Gavin said he may don a speedo. 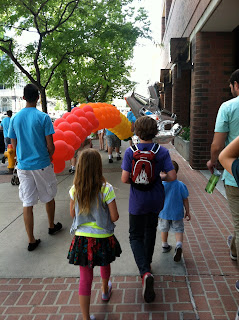 I thought that next year my sign would say "I'm sorry"to send the same type of message about Prop 8 that this billboard did for a similar situation.  I can not overlook spending millions of dollars to prevent people who love each other from being married (California's Prop 8) when a century ago when we mormons were practicing a form of marriage that was not "traditional" and we were hoping for others to see that when it comes to marriage between consenting adults, love is the most important thing.

I want mormons to think for themselves and receive inspiration for themselves when it comes to supporting gay rights.  I do not believe that a loving father in heaven would ever communicate to his children that it was okay to discriminate against his other children.  We can be like the members who knew before 1978 that blacks should have the priesthood.  We can be like the members who knew before the 21st century that women working outside the home would not ruin their families.  We can speak up because we shouldn't wait, and right now we know that denying gay people marriage equality is wrong.
Deseret News Article on the parade
Boston Globe Article on the parade
Ask Mormon Girl on being gay and LDS
Mormon Stories interview with gay mormon

Beautiful write up, Ashley! I cried again reading it. There just aren't words for me to express what it was like. Thank you for finding some. :-)

I feel sad that I wasn't there (didn't hear about it until Katrina posted pictures on FB last night), but just reading you story brought tears to my eyes as I felt the overwhelming spirit of love.

This should be required reading for all LDS members. My daughter and her family (three kids) also skipped church to march in the parade. Their impressions were nearly identical to yours.

I resigned my membership a few months ago due to the "judgementality" of the church. It is comforting to know that there are others besides my daughter who are actively trying to open minds.

The Numismatist said...
This comment has been removed by the author.
4/6/12

Thank you so much for posting this, a friend of mine posted it on facebook so I decided to read it. I loved watching you all walk by, I know many LDS people who marched in it are getting flack, but I love that so many were willing to take the time, endure the heat and support us. I hope my family, one day, will see this light and find the joy in loving all of God's children. I seriously wanted to come hug you all, But I was one of the ones hurrying the parade along with my get up and go sign. Again, thanks so much for sharing your experience!!!

Love it! Thanks for taking time to post this one.