One of my favorite things this week was watching Gavin helping Dalton and Shelby rehearse for their upcoming Spanish play. They are each playing a character in the play, Cinderella, but the catch is that the whole thing is in Spanish. This is with their after school Spanish class at McKee Immersion Spanish School (that I love). The kids see their Dad in a whole new light when he is rocking his sweet Spanish accent. 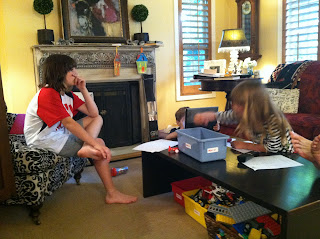 This week we had the rehearsals and performance of Shelby's Virginia Tanner dance class. I didn't have big expectations because a couple of the girls in her class have the attention span of a gnat, and Shelby hadn't been super jazzed about her classes.  We did it because it was something fun to do and try out.  (Here we are below on the day of the show, all done up.) 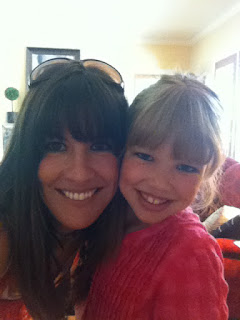 Little did I know that Shelby would become sold on dance.  Maybe it's the femininity of it all.  She's been into soccer and tennis and art, but in this extra curricular activity she gets to flit and float and be very PINK.  I think that she viewed her Grandma Paula and Aunt Kristen as the masters in that department.  I was the Mom who donned the sweat pants till 3:00 PM with hat hair and unbrushed teeth.  But on the day of her performance I got us both glamorous, and it was like she was seeing a whole new side of me...her Mom could be a pageant mom...oh happy days! 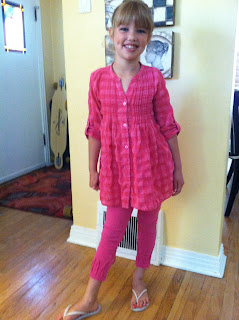 These two girls nearly did me in...but who doesn't love a challenge?  I was asked to be a "Monitor" for the performance.  Good thing that I had no idea what that entailed...otherwise I would have run for the hills.  I got to go multiple times to Kingsbury Hall where we did dress rehearsals with the girls, helping them to get in to their costumes, and keep them quiet while we waited for the other dancers.  Sounds easy, right? 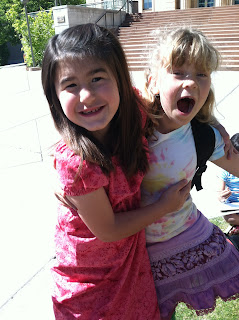 Wrong.  One little girl was terrified of heights and stairs...which meant that running up and down three flights inside the theatre was very difficult especially when you have six other girls pulling ahead of you and you all have to stay together.  I ended up doing a lot of pep talking as I held her hand and helped her to take one of the thousand steps at a time.  Her best buddy has the energy of a wind up toy and the personal boundaries of a jelly fish.  Her little hands and arms were like tentacles that she would wrap around any moving thing that was within her reach. 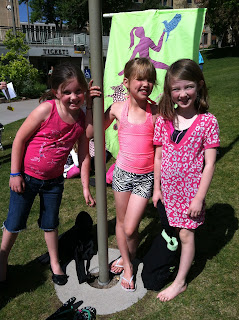 So I had to summon all of my patience and contraband candy that I used for bribing, to survive the week.  It was a lot of reminding the girls to whisper so that people couldn't hear them on the stage, or try to keep them entertained with Gavin's IPad in their half hour of down time while they waited for the other dance groups to finish up.  I had never been a dance Mom.  I never envisioned myself as one.  Too many memories of pre pubescent girls bumping and grinding on a dance floor in half time shows, looking like they were training for their roles in smoke filled Vegas casinos.  I got the lure it had for others but it never did much for me (especially since I had zero talent in it). 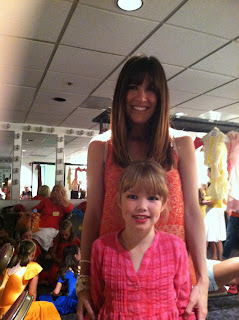 But with Shelby, I see why she loves it.  It is because with Virginia Tanner, the dance moves are not sexual or seductive, but freeing and empowering.  They teach dance to inspire the girls.  With their vision, I was converted to how wonderful dance could be. 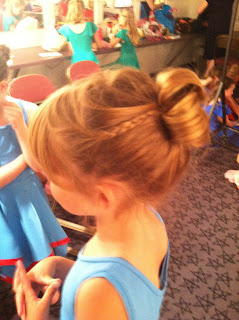 This is the special hair do that I did for Shelby.  Oh yes, I have secret hidden talents. 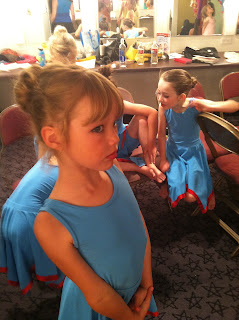 Here she is waiting with the girls in the basement dressing room of Kingsbury Hall at the University of Utah. 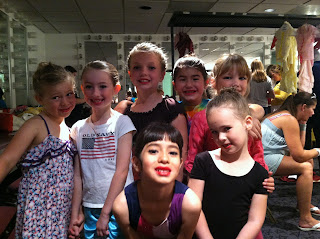 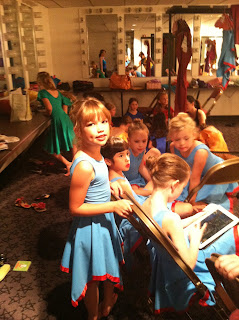 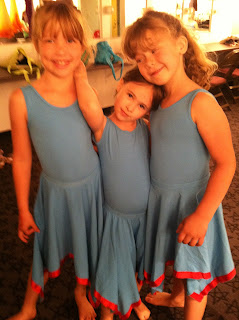 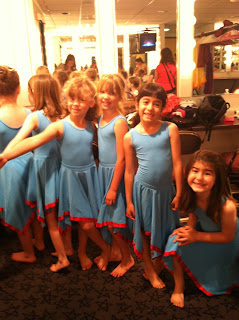 The women who run Virginia Tanner dance are inspiring.  They are not done up.  They are not beauty queens.  They are not super thin, or really fit.  What they are is confident.  They are at home in their bodies.  I have never seen women so alive.  And whether they were in their twenties or their sixties (like Shelby's teacher) they were beautiful.  Here the director gives the girls from all ages a pep talk before the show. 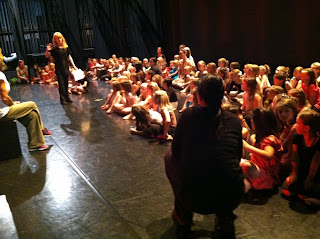 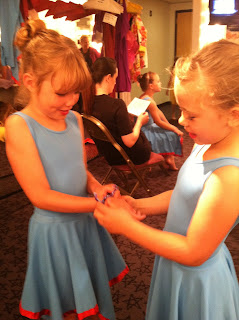 Before the performance, Shelby was unsure about what was going to happen.  She wasn't really nervous.. it's more that she thought all the hype was a bit much.  Some of the girls were really nervous...to the point of some drama (which we both have limited patience for). 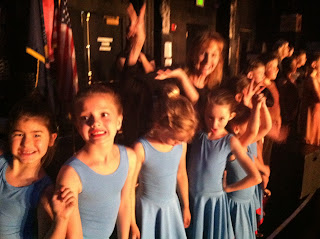 But once she was on stage, she was SOLD.  Here she is below with her hands in the air, freezing for her pose.  Her smile covered her entire face.  She said that she could hear her Grandma Paula cheering for her in the front row.  The stage was something that she felt safe on.  I remember that feeling. 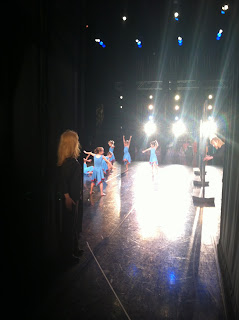 These panels were their props, and though they were pretty cumbersome and heavy, the girls did well with them. 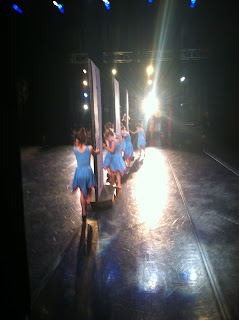 They finished their dance and at the end they hugged each other and laughed till their sides hurt.  I viewed it all from behind the scenes, off to the side of the stage curtains, and loved to see them all shine.  Even the gals that had been a little challenging were amazing...giving it all they had and giving a beautiful performance.  Once they were downstairs, they were so thrilled with how well they did that they ran down the hall to their dressing room, jumping for joy. 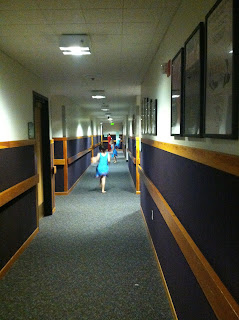 Hooray for new talents, interests, adventures, friends, and self esteem.  Life is wonderful.