Yes, that is what it looks like.  It's a mouse.  I think that one of our cats caught it last summer.  And Shelby was filled with different emotions.  She is a rational girl....she has no problem watching those nature shows where the lion is ripping the head off some gazelle, because as she might say, "that's life." 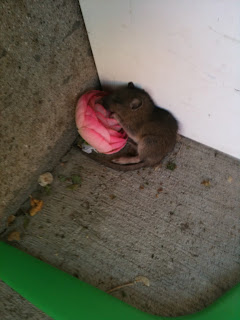 However, death is something that doesn't intersect the life of an east Salt Lake City six year old very often, so when it does, it is taken pretty seriously.  I told her that she could not bring the dead mouse inside...or touch it with her hands.  I am not sure how she was able to get the dead mouse propped up on one of her fake flowers from her room, but I think that she felt that it was a more fitting way to go. 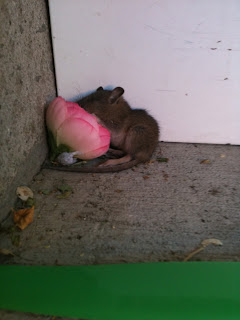 Last night the kids and Gavin were playing LIFE on the Xbox.  Shelby was kicking everyone's booty.  She did not hesitate to get a college degree, instead of going straight in to a career.  She then picked a spouse, who Dalton admitted, "looked OK."  She got her dream job as a vet, and then surprised us all by dropping like a litter of kids herself.  There were little babies all around her.  And I am not sure what you can decide between...a baby or a car?...a baby or a new home?  Whatever her choice was, she kept choosing BABY until she was foaming at the mouth with them.

When I asked her what she was going to name one of the girls, she replied, "Jezebel...no wait, Isabelle." With a heart as big as hers, what a LIFE she will have.  I love you Shelby.