Gavin's sister and her family have Spring Break super early in the year. Lucky for us they came out to ski with us for their break. Dalton and Shelby were so excited to have their cousins come ski with us. Both families got condos up at Solitude, and we had a blast.  Here the kiddos are on the last day, eating at the deli/pizza shop in Solitude's village. 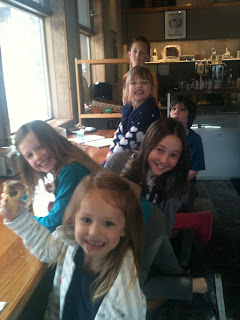 Dalton and Jackson had some fun together...although they would have had more if they could have just had their OWN condo for Pete's sake!  I mean, they are pretty close to 18 already, right!? 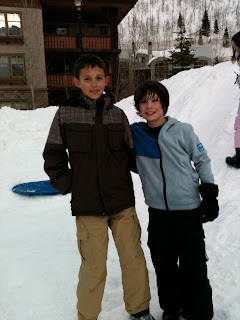 Charlotte was keeping up with everybody! 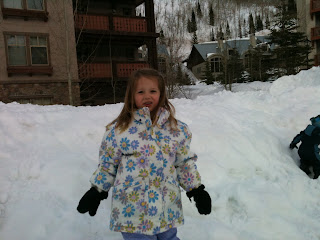 Shelby and Ellison are a match made in heaven.  Cut from the same cloth- as stubborn and smart as the day is long.  They had a sleepover together two nights during the trip, which was not nearly enough as far as they were concerned.  The skiing was fun, but MORE fun was comparing pillow pets, playing Bop It, melting snow in Solitude's hot tubs, and helping the boys in their snowball fight with teenagers. 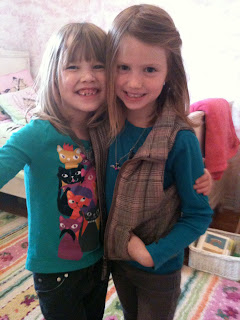 Before we headed up to the mountain we went over to This Is The Place Park, so the cousins could get their fill of Pie-Oh-Neer in as they are deprived of such living outside of Zion.  It was fun.  We rode a "train" that went about a hair faster than my cat can walk.  We stopped in to visit Ann Eliza's home that they moved over to the park from it's original location in Sugar House.  We got to see all the rooms, including Ann Eliza's room, and the room of their servant.  It was a really cool old house.  We also got to see how they painted all of the cheap wood to look like expensive wood or marble. 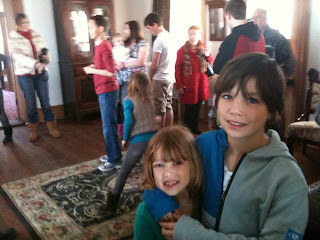 This picture is on the last day...I think.  The kids got their snow clothes on and decided to do some fort building slash sledding in ice skating area of the Village that was covered with snow. 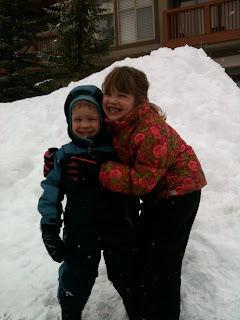 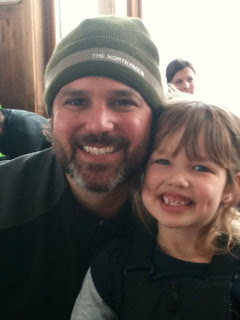 Here we are back at This Is The Place Park.  The kids lined up for a We-Are-Cousins-And-So-We-Are-Forced-To-Take-Cheesy-Pictures picture.  Sorry kids.  They walked around the monuments to the settlers who got to Utah before the mormon pioneers, like the native americans, the spanish, and the catholic missionaries. 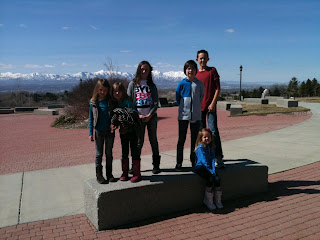 Another We-Are-Cousins photo.  The cousins were so funny when they got in to town.  We had told them all about the great snow, but at our house it had been so warm that it had all melted.  I think that they thought that we were crazy, until they got up to Solitude...and boy was there ever snow! 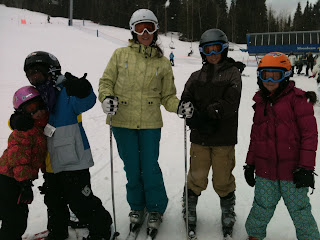 "We-love-each-other-so-much-and-we-are-fun-and-smart-and-cool!"  Ellison was skiing by the end of the trip.  It was that dang stopping that was driving her nuts.  But by the end she had it down, and is set to rock it next year when she hopefully comes out again! 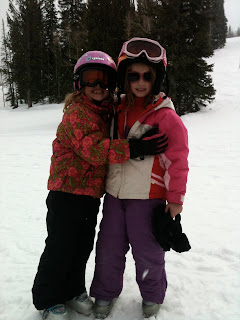 "Besties"...getting ready to do some sledding down the hill in front of our condo in the Village. 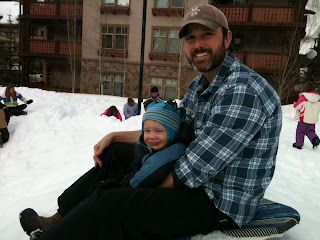 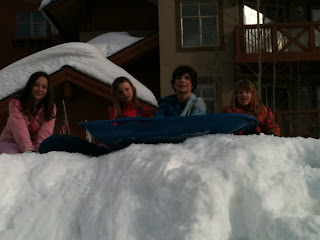 Ellison was fearless on the sledding! 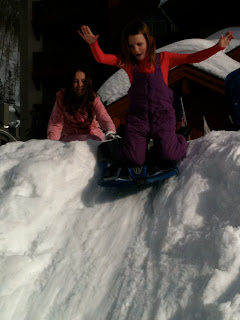 So Dalton and Jackson had found these punk teenagers that were pelting people with snowballs.  So then they decide to try to act like punk teenagers and pelt them back.  Luckily Garrett and I were hovering over in the periphery...otherwise they probably would have ended up as road kill.  I have to say that I was pretty shocked at what a good arm both Jackson and Dalton had.  I think that the teenagers were shocked too. 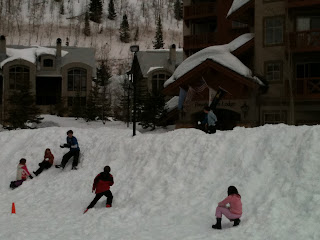 The gals.. Oh, and Caroline was a wicked skier!  She did not want to come down off the mountain.  We were skiing on all the runs, and she was keeping up like she had been doing it for years.  Way to go Caroline.  Dalton was pretty impressed. 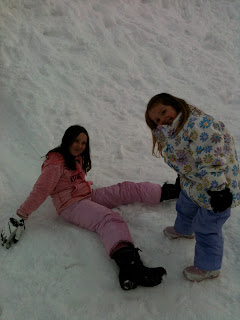 Shelby and the other kids found these caves are burrows that had been created around the ice rink mound, and played hide and seek in them. 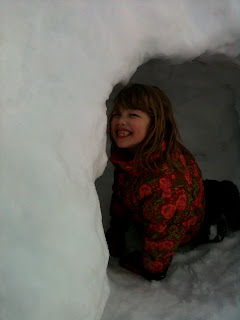 What else...every night the kids swam in the heated(ish) pool and the hot tubs.  Garrett, we found out on the last day, was not old enough to be in the hot tub.  So he puked in it, and then we got out.  The hot tub nazi had her eye on us all night.  She was probably feeling like a nazi because she was working in the kiddie day care all day...I totally get it.
We ate at a pretty nice restaurant one night and it was fun(ish).  Except that there was no way that we were bringing Garrett, so it was just the kids and I with the cousin family.  And the food was a little too fancy for some of the kids.  And the place had cloth napkins and real cups...which is just way too out of my comfort zone for my six year old.  So, we ate fast and got out of there before one of the cousin's dry heaves of drama turned in to real barf and we were escorted out.
The kids loved the ice cream at the deli shop.  We enjoyed it a few times.  There was a yurt up there that we heard you can eat in, but didn't make it up...maybe next time.
It was great.  Some had more fun skiing than others...but it was awesome to be together in such a gorgeous setting.  Can't wait to do it again.  Maybe some year we can get grandma and grandpa out here skiing with us!

shelbs and ellison are absotively posolutely two peas in a pod. ellison would be dry heaving with grief over the dead mouse (propped up on the fake flower is hysterical--without using her hands, I'm sure...)

thanks for hosting us and showing us such a divine time. a new tradition to be sure...love you guys.