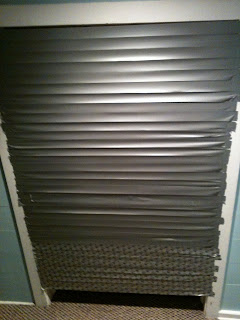 This year was a disappointment when it comes to April Fool's Day.  I set the bar way too high in years past, and now my children have expectations that are far too high.  I can't keep it up.  Gavin tried to take over the reigns this year.  He duck taped Dalton in to his room.  He said it was either an old mission trick or an old BYU trick, which probably explains why both were such memorable experiences for him.  When Dalton opened up his door he was met with a wall of duck tape.  I had nightmares all night that getting over this prank required years of therapy for Dalton.

Dalton also woke up to jalapeno spiked milk for his cereal.  His nose must be broken, because how he poured that on his cereal and didn't pass out from the fumes, I do not know.  He went so far as to take a giant spoonful of it and put it in his mouth before he figured it out.  Gavin burst out laughing.

Poor Shelby just got tissue paper shoved in the toes of her shoes.  Other than that it was pretty uneventful.  Dalton asked me if there were any other tricks waiting for him, after the milk stunt.  I told him no.  "Really Mom, that's just not like you," he replied.

I was nervous during the day, about how Dalton would try to get us, his parents.  He doesn't really get the difference between a prank that is funny and a prank that makes you want to murder the person who pulled it on you.  I seriously thought I'd come home to a giant pile of dog poop in my bed.

Luckily, he saved all of his revenge for his dad.  He took off  Gavin's shower nozzle and toilet papered his bathroom.  I think he sabotaged some of his food too.  The only trick that I got was opening up my lap top to see a giant glistening picture of Fabio...oh, the horror. 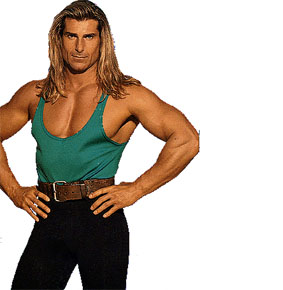 Truthfully, the most horrible thing about Fabio, in my mind, is his hair.  Can someone please get that guy a date with a gay hairdresser STAT?  Although, I am not one to judge right now.

So, lesson that I have learned is keep expectations low.  There will be no leprechauns dying the cats' hair green, or leaving green milk.  St. Nick is not going to leave coal or fruit, or change in my kids shoes on some random night in December.  I am thinking that the Easter Bunny might go on vacation this year, and Santa might quit his day job.  Let's just lower the bar across the field, why don't we?

Dalton is still talking about the Christmas where the gifts stretched across half the floor of the front room, and how every Christmas since then has been a let-down.  Oh, the tragedy.

It's April.  I am hoping for an early and long spring.  No April fooling.