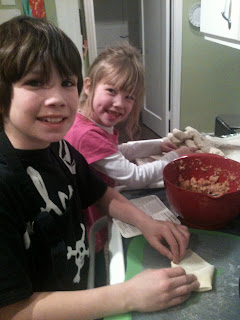 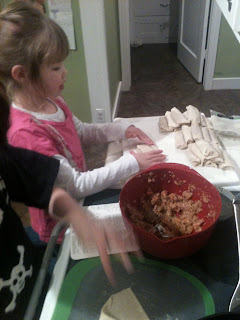 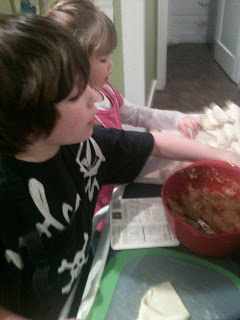 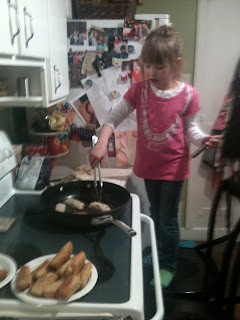 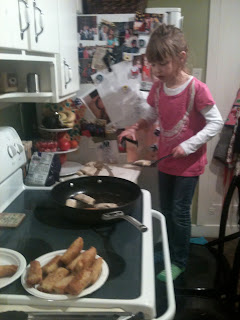 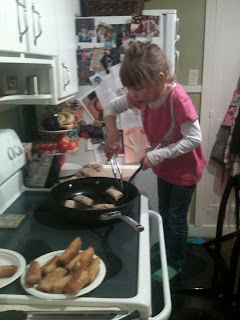 Dalton, Shelby and I made Sister DeJesus's egg rolls tonight for dinner.  The kids loved them.  I hadn't made them since we lived in Boston five years ago, but Dalton snarfed them up like he did when he was a little four year old boy.  We used to call them baby burritos.  She taught me to make them.  Every time I would come to see her to visit teach her, she'd have a new batch for my friend Christina and I to eat.  They were addicting.  And she was a pro at making them.

Gosh...I miss her.  I miss him- her husband Raul.  They were like Dalton's adopted grandparents.  Their life was so hard.  They had come to America, hoping to send for their young adult children once they were here, but they never could make it happen.  Red tape, bad advice from lawyers in the Philippines.  Raul and Gertrude got here because Raul had been in the Baton Death March and had fought under the U.S. flag.  His war stories were shocking.  He could only tell small parts because it was so painful to recall.  So every month they sent what little extra money they had back home to their children, who were unemployed and living hand to mouth with their new young families.

Raul and Gertrude had come from sunny and tropical weather but were living in a dark and cold one bedroom apartment where crime was rampant and seven months out of the year the weather was freezing and miserable.  They lived only for others..hoping that if they just prayed hard enough the Lord would hear their prayers and reunite their family.  Sister DeJesus and Raul laughed when they told the stories of how Sister used to hide in the closet when the Mormon missionaries would come to teach her back in the Philippines.  She didn't believe what they were teaching her.  But she went along because her husband believed and because she wanted to go to America for a better life.

They were lovely, and life just was not as good for them as it should have been.  Eventually they went back to the Philippines.  They gave up hoping that they could get their piece of the American Dream.  As hopeful as they had been throughout the years, now- in the twilight of their years, they gave up.  Thinking that it was better to live in squalor with their family back home, than to live a shell of a life without their children, thousands of miles away, hoping that their sacrifice would make a better life for their children.  Raul died a few years after they got home.  Thank goodness he was with his children and grandchildren.  And I believe that Gertrude followed close behind.

They didn't have a phone in the Philippines.  You had to call a neighbor's store, tell them you were looking for the DeJesus's, and then call back so that the store owner could walk to the DeJesus's home to get them.  Without their parents social security, I don't know how their kids are making ends meet. They wrote me once or twice, the children, talking about their beloved parents and how grateful they were to have had them home for the end of their lives.  I wondered long after if I should have sent money to their children.  They never asked for it...they never would have.  But now I think they were probably desperately poor and I may have been their only link to financial security back in America.

During her time in Boston, Sister DeJesus would volunteer in the nursery at our church building, where she would hold and baby the little children..so obviously heart broken that she had missed getting to see her own grandchildrens' childhoods.  Dalton loved her and she LOVED him.  Raul loved Dalton too- always commenting on how athletic and energetic he was.  Oh my gosh, I can not even think about it without getting so sad.  There we were, these spoiled young newlyweds with our biggest problem being what outfits to wear to church, or which organic apples we were going to puree for our baby's natural applesauce, and there were these hungry and sad people with histories of bitter disappointment who wouldn't want to trouble anyone in the least.

I have regrets.  I wish that I would have taken them in and let them be our full time grandparents.  I wish that I would have had the maturity to have seen their needs and been there to give them what they needed.  I wish that I would have put all the religion aside, and just been there for Gertrude.  She didn't buy it.  She just needed the friendships...the relationships.  Her husband was as converted as they come...at the temple in Belmont every week...walking for a mile in the freezing cold, with snow falling all around him, to make sure that he didn't miss his temple duty and let the giant gleaming building that had been erected just a few years earlier, go to waste.  Gertrude stayed home.  It wasn't in her heart.  She was there to support Raul.. but in her heart she was already dead.  Life without her children and grandchildren...how could happiness even exist?  And she hardly had a voice.  Even after years of living in America, she didn't feel confident speaking the language.

Even now I can feel her pushing a bag of warm egg rolls in to my stomach and forcing me to take them as I am getting ready to leave their house with all the "wisdom" I've just imparted, even though their cupboards were so bare and their apartment so meager, I knew that they had probably spent all their money for the week on that one meal just to love me and impress me.  What a young idiot I was.


I remember dropping Raul off at his apartment in South Boston, after I'd picked him up from the temple one night, and someone on his street began to yell at me.  Raul, this 85 year old man, who was thin as a rail, with a voice as soft as a feather and with a face as kind as that of a child's, jumped out of the car and confronted the man, distracting him so that I could drive off and avoid the confrontation...with Sister looking down from her window at the street and waiving me off as well.

So, as Dalton and Shelby and Gavin and I are eating the egg rolls tonight, I am teary with the memories of where this recipe came from. Here Shelby was declaring how wonderful the egg rolls were, when I remember Sister holding this very same daughter as a chubby one year old with a desperation of one who has lost her own babies.  I remember wondering if we could move them with us back to Utah.  I asked her if she'd want to go with us.  But her heart was east, in the Philippines, not more west in some dry hot desert state.  I miss them...I have regrets.

Email ThisBlogThis!Share to TwitterShare to FacebookShare to Pinterest
Labels: Boston

What a beautiful and tragic story. Regrets. I have many as well. Sometimes life just doesn't make much sense.

I guess all we can do with regrets is learn from them. Grow. Change. And never forget the people who touched our lives in this way.