So April Fool's was a hit. Dalton and Shelby laughed at the frozen Life cereal. Shelby actually thought that it was a great new invention and dug in to her new morning Popsicle. The glued ham was also a hit. Of course, then they thought that I had poisoned or peed in the OJ and every other food substance after that was cause for suspicion. Dalton tried to put his shoes on but couldn't because of the newspaper. He was thrilled by my cleverness..I know, what can I say? Shelby asked if there was any other April Fool's trick, so I told them that one of them should go to the bathroom and make sure to wipe. They both ran to the bathroom, I am sure hoping to see some poop related April Fool's trick. Wouldn't that have been the best. Edible poop? Poop on the wall? Poop that talks? But a dollar bill in the toilet paper was a close second.

They asked for more and were disappointed when they learned that was all. But I had to April Fool Dalton one more time before school so I told him that his play date was canceled because his friend was sick. He was majority bummed. I didn't do the hair paint because I couldn't find our cans, but that can be for next year. I did help Dalton tape up his hand and wrist to April Fool his friends and teachers. He said they all bought it. We practiced his gimpy hand moves so he looked truly injured. And then I had to do my homework before I went to school, so my part of April Fool's was over.

But it didn't end there. By accident, the result of my yearly April Fool's madness, has been the socializing of my children in to pranksters. It's gotten to where they get just as big of a thrill from playing a prank as they do in receiving one. And so, the second half of the day was filled with kid pranks on the grown-ups.

You know you're in trouble when your nine year old asks you if vinegar is poisonous. Thank goodness for him, his dad lived to tell about the adventure of Drinking Dalton's "lemonade" that was one part lemon, two hundred parts vinegar. Have no idea how Gavin even held that cup to his lips. Then he asked me to open up his piggy bank that he had filled with crushed tortilla chips. He followed that one up with giving me a dollar bill in the toilet paper roll, but with the added flair of stickers stuck to the inside of my toilet that will be super fun for me to scrape off. 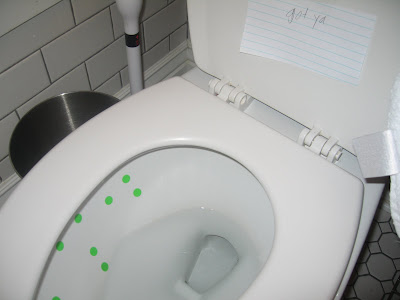 The best one though, was downstairs where he had written all over the walls and toilet with marker. That one did kind of take my breath away for a moment. He used a brown marker to cover all over the inside of the toilet bowl, and then dumped a bunch of food and crud in the toilet, including orange juice, so it looked like the toilet at a public pool in a town with no stoplights-scary. Thankfully he had used a washable marker.

Oh yes, he has caught the bug. Gavin and I got to the point where every time the kids said they had to "show us something" we quickly volunteered the other for the job. Shelby just loved tagging along and throwing an "APRIL FOOLS!" in at the top of her lungs along side Dalton after every one of his pranks. I must say, I think we all felt pretty April Fooled Out at the end of the day. It had been a good one for the family of April Fools.

Email ThisBlogThis!Share to TwitterShare to FacebookShare to Pinterest
Labels: April Fool's, Ashley at the U