We got a cat. I know!!! What was I thinking? Am I going to be one of those moms who buys my daughter a sequined padded bra and thong when she's eight years old, or buys my fifteen year old son and his friends beer so that I am the cool mom? Am I that weak, that upon seeing my daughter practically melt over a little ball of fluff inside the PETCO when the humane society brings their raggedy animals over the weekend, I yell Uncle and sign away on the dotted line? Oy.
So, Shelby chose this kitten and promptly named her LuLu. She was cute enough. I kind of steered her away from some matted calico who looked like the cat from The Last Unicorn, with the eye patch and the peg leg...still scarred from that movie BTW. So, she is holding this cat inside the store, and it is just laying in her arms like a rag doll. And the kid who is manning the animals who are up for adoption comments how he's never seen a cat take to a kid like that. And I have to admit it's pretty impressive. I mean, our current cat only wants to have physical contact with our gecko, and that is to digest him, so seeing this little grey and white thing that has become one with Shelby and is sleeping peacefully with it's little head resting in the crook of Shelby's elbow is the definition of darling.

So we call Gavin..no answer. We call him again...and again. Shelby sitting at the folding chair with her little cat in her arms, as all the kids in the store are drawn to her and the kitten. They ask her name- "Lulu". They ask if she's a girl- "yes". They ask if Shelby is adopting her- "Yes". They ooh and ahhh and the parents look at me like I am a sap while the kids look at her like she has just won the biggest lottery on earth. Shelby beams. The cat just blinks and curls it's tail even tighter against it's little body. I don't get to hold the cat. She and Shelby are hooked together.

Gavin calls. I immediately hand the phone to Shelby after I tell him that his daughter wants to talk with him. She asks her dad if she can bring home a cat that she loves. There is a pause and she hands the phone to me. "I thought that you were in a fire. That there was an accident, the way you had called me." "Well, aren't you glad to know that we're safe and that we're calling you for a cat instead?" "I am on a work call. I can't deal with this right now." So we told the man-boy that we'd be back. He didn't look hopeful. He'd seen us in there in previous weekends. But Shelby was set.

I felt apprehensive. The cat was small. Our cat at home was fat and who knows how he'd take to a new furry member of the family. Garrett was not especially gentle with the animal kingdom. I don't know. I was just feeling nervous. We went back. I know. What am I..a moth to the flame? I had a paper due. What can I say. It delayed the treacherous. So, we went back, with Dad's half-blessing. I think that in his mind, having one cat is like having one wart..or one mental breakdown. It's something you can overlook. It doesn't define you. But two cats...multiple...it pretty much puts us in the category of crazy cat lady. Now we don't have a wart, we have an outbreak. We don't have a breakdown, we have a mental condition. We don't have a litter box hidden downstairs in the storeroom, we have a house full of cat toys and scratching posts for furniture. I get it..in a way.

So, we sign for the cat. I had never adopted an animal before. We got our first cat through a neighbor who found it as a stray kitten. We bought our gecko. But this was serious. Lots of dotted lines, "No give-backs" clauses, warnings, questions. Will we de-claw? No..so inhumane. Will we let it outside? Yes, until we found out that we aren't supposed to because they get abused by kids and get diseases. OK, note to self, stop kicking Amigo's fat butt out the door every day, trying to force some exercise on him.

I had finished signing away, and that was it. The cat hadn't said one peep the entire time we were there. It didn't seem to mind as it was put in to one of those cat crates that Amigo practically shreds in to confetti trying to get out of. This kitten appeared to be perfect. We got home, and Shelby took her kitten out. Garrett rushed for it, and had to be hauled off, moaning and screaming in protest. Amigo came over, sniffed the little thing and began growling in a guttural way that made me think he was going to start speaking in tongues and writhing on the ground.

He acted like we'd just brought him home a sister-wife. And though we claimed it was just going to be a platonic thing, he could read the writing on the wall. He'd let himself go...become overweight, wasn't satisfying the kids physically, acted disinterested, was only in it for the food and the warm house. He should have tried harder..been more available. He could do it! He could loose the weight, act interested, be physical, let the kids pet him. Anything...just not a sister-wife-cat. But it was too late. We were smitten. This cat was young, and sweet, and let us coddle and cuddle her. She purred, and everyone wanted to pet her...even Dalton. Amigo was not going to be the kind fat older sister-wife. He would teach this young hussy a thing or two. But we'd had enough, and out he went- banished to some other part of the house. While Shelby and her little fluff ball just laid together, and sat together, and walked around together. It was like one of her little stuffed animals, only alive.

Shelby could not stop complimenting her kitten. "It is the most beautiful kitten...mom look at her tail!..it's striped. Don't you love her nose!?..it's pink. I love her paws..they are white. And Look!..her toes are pink too!..I think she looks like a wild cat because of her stripes. She is really perfect. I have always wanted a kitten..and THIS is the best kitten." I don't know how Shelby's cheeks weren't aching because she was smiling like a Cheshire cat for hours on end. They snuggled, and cuddled, and loved each other. 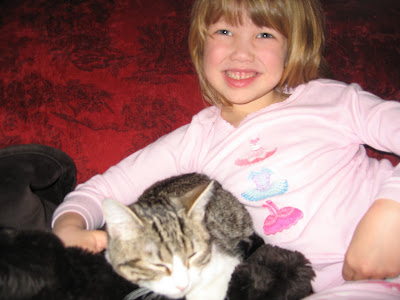 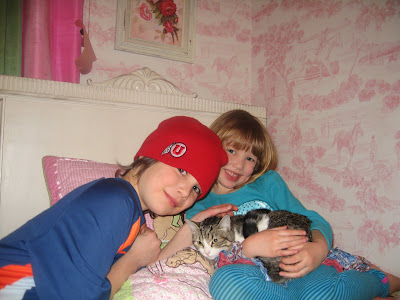 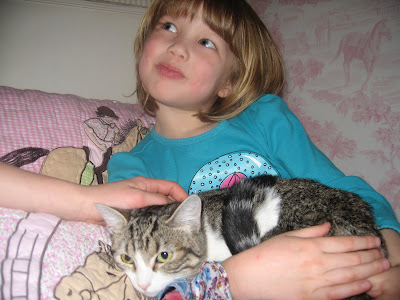 At night the kitten snuck under Dalton's bed and hid. Shelby was beside herself because she wanted to sleep with her kitten. I tried to convince her that the kitten was just getting used to things here. In the morning, Shelby had dragged the kitten out, and it had returned to it's past position of lap cat. But things changed today. The kitten got more skittish. Wanted to hide a lot. refused tuna water, which is like heroin to Amigo. The easy going personality that we thought she had, now seemed more like lethargy. I now noticed how skinny she was, and realized that she hadn't eaten all day. I realized that we'd brought home a sick little kitten.

This evening Shelby came in crying. She said that Lulu had thrown up. Sure enough, she was right. It wasn't much. The kitten was hiding under Shelby's dresser. Shelby said to me, "Well, her throw up was beautiful...it was pink." Of course it was sweetheart..that is how I feel when you throw up. Even your barf is beautiful.

So now the kitten is under Shelby's bed. The vet doesn't open until Monday. I can take my little kitten to the after hours vet clinic, and pay a small fortune, or wait for another day, hoping that it's ok. I will go get it some different food. Maybe that will help. I don't know. I have the feeling that when this kitten gets better it's personality may not be so stuffed-animalish. It might be a wild little kitten who was just feeling rotten and acted snuggly on just the right day.

And then I think, Well we can just get another cat and have three cats. But then we really would be like the crazy cat lady..so I guess we make the most with what we got...a sequined training bra and a cold one sound nice right about now. 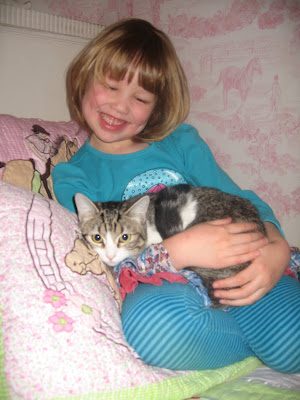 Your kids are enchanting. They remind me so much of you.

I think you are only considered a cat lady if you have 4 or more, if your house has a bad cat order, and have cat life insurance. I had to laugh at that in your new post. Once Ben told one colleague he thought it was crazy that another colleague was paying 20K (taking out loans) for cancer treatment for his dog. The girl totally serious replied, "you mean to tell me that if Samara had cancer you wouldn't pay for her treatment."

Glad to see new posts up! I hope classes are going well.