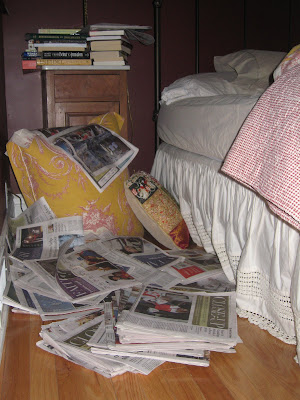 I can't throw a newspaper away without reading it. I want to support the industry. I love the idea of reading the paper every day. But there are many days during the winter that I don't get out in the freezing cold to unbury it from the snow mound it has been tossed on, until after the day is over..and at that point I just toss it in the house, to add to the growing stack of news to be enlightened (or depressed) by.

And so the stack grows and it grows..until finally Gavin threatens to toss it, and so I sit down with my ten pound mass of ink and paper and begin to unearth what I have been missing.

Living in Utah, if you did not seek it out, you would have no idea that a world really existed outside of the state lines. National and world headlines get only a few sentences, and are buried back behind the breaking news that David Archuletta is coming to the Sandy Mall to perform this Saturday, and Mark Shurtleff is speaking at an Eagle Convention forum where they will speak on the ills of interpreting the constitution.

It's what sells. Why print what reads like "blah, blah, blah" to many? So, I am reading through the articles of what has been happening while I have been living in my bubble. Some of the headlines are obviously so earth-shattering that you'd have to be living under a rock not to know that they have occurred- like the earthquake in Haiti. The images on the pages were shocking. And to think that we could get on a boat from the coast of our country and reach this god-forsaken hell hole in a short amount of time. I told Gavin that I wished that we could just incorporate Haiti as another state in the USA. I mean, why not? Or they could be like Puerto Rico..the best of both worlds. No taxes, but protection and infrastructure.
Really..why couldn't it work? The place isn't teaming with ancient culture that we would be uprooting. We already did that over the last century. The natives of that country were not really natives at all..but slaves brought there by Europeans, to work in sugar plantations. They revolted..rose up against the Europeans..and drove them out. But we've managed to go in there and screw it up for them..with help from many of their leaders..time and time again. Read Paul Farmer's book Mountains Beyond Mountains for a quick history of this country and the perils that they faced even before this earthquake. It is one of my favorite books.

Gavin pointed out to me, that the days of colonialism are gone, and it's generally frowned upon now adays. Well, I get that. When a country does not want to be taken over, and made into a new USA-ified version, say like the Hawaiian islands, then that is understandable. But if it is a country that is bordering on total collapse. In fact, has pretty much collapsed, and has no prospect for recovery..and could use a strong central government to give them security and quality of life..then I say, why the hell not? I am having dreams of just bull-dozing every crappily dirt-made dwelling, and starting from square one with sewer, and roads, and utilities. I am seeing a destination spot created like Jamaica, with tourists and an economy and schools for the children and jobs for the Haitians. But what do I know.

Where was I?...Oh yes, so I was skimming through all of these articles that were old, and that I was usually aware of. There was the story of the Utah Senate Majority Leader, who had sponsored all the drunk driving laws, and then was pulled over at 2:00 AM for a DUI with a lobbyist in the car with him. Those articles were fun to get caught up on. By the last paper, he had decided to resign, and was repentant for his behavior with his fellow republicans saying that they had already fully forgiven him. To the political graveyard with his career...good-bye potential future Republican gubernatorial candidate.

So while the majority of news stories were not eye catching..I ended up spending a minute or two in the obituaries, at the end of the paper. And every time I'd see a bald headed, wrinkly face, with the names of generations of children and grand-children and great-grandchildren who they would be missed by..I felt peace. But then you'd see a young face. Even a youngish one. In their forties, or thirties, or twenties. And my heart broke. Gavin is asleep next to me in bed and I am sobbing for these lives that are now black typeface on a flimsy grey piece of paper. And the families are usually stoic. I mean they'd have to be. They write these obituaries with the wounds so fresh from their loss, they are practically hemorrhaging.

The articles read that their loved one's life was tragically cut short. That they leave behind grief-stricken family. That they are in a better place. That Heavenly Father has taken their loved one early. If it is a respectable reason; like cancer or an accidental fatality..then it might be mentioned. But otherwise the cause is left to speculation..hanging over the sentiment and grief like a dark storm cloud. The worst is when there are little children left behind. My mind has to consciously shut doors to the rooms in my mind where I could recreate these scenarios as being my own, and become completely consumed with grief that is no part my own.

But isn't it my own? The fact that there is a child in my neck of the woods, who no longer has a father. A future friend of my children's whose life has been forever changed. An acquaintance down the road. Or maybe not. Maybe our lives will never intersect. But it still is a part of me..because I now know they exist. And so they are real.

The parents who bury children..those posts are almost unreadable. Especially the ones who have had chronic diseases and have been in a fight for what small time they have been on earth. Again..hearing the sounds of my healthy sleeping children next door fills me with pangs of guilt, for what reason was I "blessed" enough to inherit the ones who will live out long lives full of depth and energy and richness? There is no sense, and even less in trying to find some semblance of sense.

Newspaper after newspaper, day after day, I read these tiny blurbs that give window to the survivor's tales. Trying to immortalize..in one paragraph, the depth of their love for and the magnitude of the soul of the one they have lost.

Cue 2:00 AM. Garrett wakes, and I am only half-way done with my archives of papers. I check on him, come back and look at my half-read papers and decide that I must go to bed, and I must not read the rest of these papers. My heart can't handle it. The tens of thousands of Haitians who have no name and no story, but instead are thrown in unmarked graves and hastily buried, to avoid disease. And the named Utahans whose stories tear in to my heart, causing me to toss and turn before I can fall asleep.

My eyes are puffy this morning. There is no making peace. The point of all of this droning on and on, was to say that I want to cancel my Newspaper subscription. I won't have the physical reminder of what news I am missing. I won't have the ink stained fingers, and the overflowing recycling bins. Instead I can log on to the web and surf the parts that appeal, while leaving the obituary pages unclicked.

But I won't. I will cancel the paper. But I won't leave the obituaries alone. After all, life not written and recorded is life not lived. I only wish that the whole story would be shared. There is no reason for sugar-coating life even in death.

Tragedy is as real as comedy and romance. And makes for the comedy that much more welcome. Here's to honesty in life and death. There is nothing so shameful as shame itself, and nothing is worthy of it's company.

Every journey is worthy because it has existed.

Email ThisBlogThis!Share to TwitterShare to FacebookShare to Pinterest
Labels: death, losing it