We spent the week of Thanksgiving with Gavin's family in Arizona. This has become a tradition that my kids look forward to all year. We get to escape the cold, and don shorts that were put away months ago here in Utah. We get to stay with Aunt Karen and Uncle Marc who have cool kids, a cool house, a cool swimming pool, and are just downright cool in every other way. 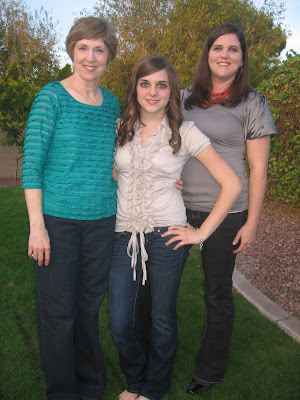 Trying to get the Hoopes men to pose for a picture is a little like bathing cats in scalding hot oil...just aint going to happen as long as Doug is alive and breathing. 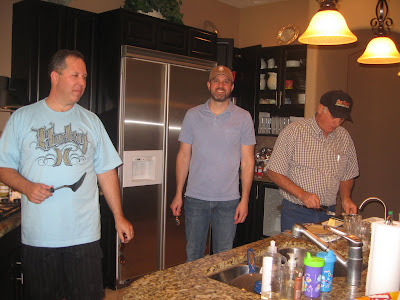 Grandma Martha played card games with the girls, and was so patient to teach Shelby all the rules so that she could keep up. 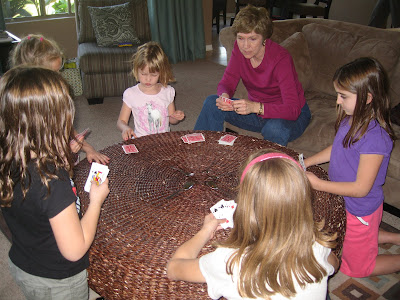 Meanwhile, the adults played spoons, and Scattergories. These are some competitive game players. I got schooled the first time I played against them, and quickly learned this was no place for wussies. 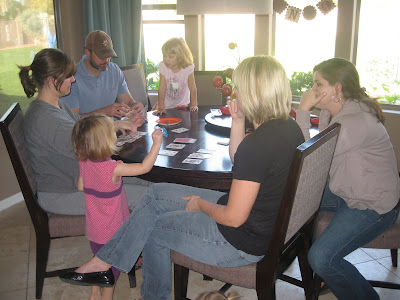 The girls did a craft project on Karen's bathroom floor..not sure if she was aware of this. But they were knee-deep in fabrics and thread. 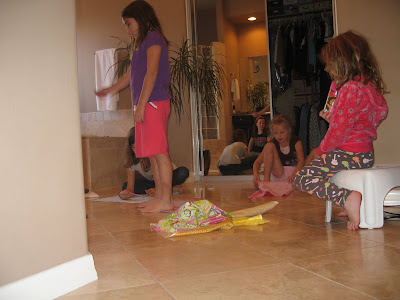 Here is Garrett's nemesis- cousin Savannah. And while she weighs about three pounds when she's wet, she is a force that you do not want to mess with. It's like Little-Cindy-Loo-Hoo on roids. Garrett quickly learned to steer clear when he saw this little force of nature coming. She was a pro at the chest-bumps, the shirt grabs, and a few other smack-down moves she'd mastered. 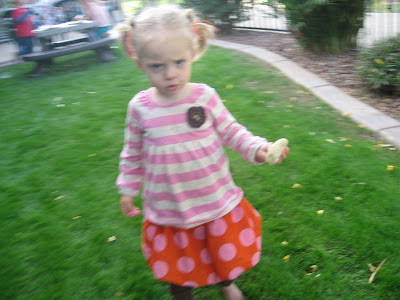 Some of the girls went and saw New Moon, while the dads stayed home with the kids. And all I can say is ILOVEEDWARD,ILOVEEDWARD,ILOVEEDWARD. Okay..was that clear? When did pasty white skin, and the body weight of a pre-pubescent girl suddenly get so sexy? I mean..Jacob was lovely as well. But the angst of a hundred years of longing...oh, you just can't compete with that. Here we are before the movie. 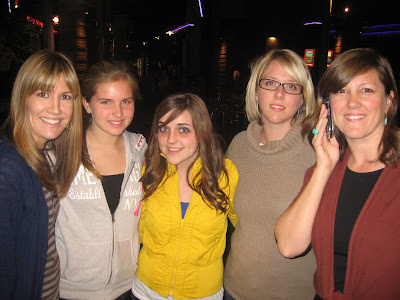 We took family pictures one afternoon, and right as Martha and Doug were about to pose, they got splashed by some child who was jumping in the pool. Hey, it caused Doug to smile...a real smile. Holy macaroni..call the press..we have a smile. Martha got grief about her shirt looking like a flamenco dancer's. It was ruffly..which I guess is just going a little too far for some people. I mean, she's our mother for cryin out loud...stick her in a potato sack already! 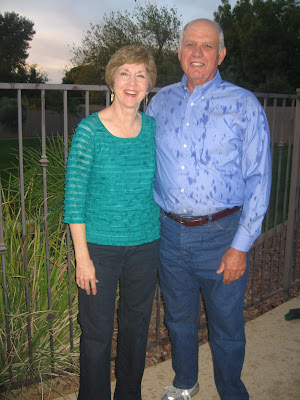 For some reason, Gavin decided that on the day of family pictures, he was going to go with the no-do-hair-do. Thanks honey. Nothing like experimenting on the day we need our photos for our Christmas cards. So, here we have blondie and flowie. 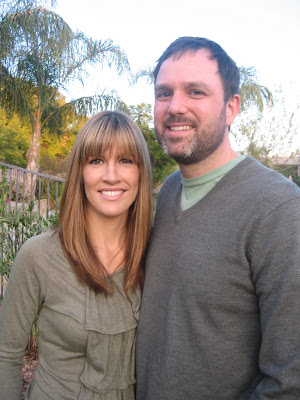 Did I mention how wonderful Karen's new house is? I didn't take gobs of pictures of it. I should have because it looks like something out of Architectural Digest. And her yard...oh my gosh...are we in Arizona or Seattle? Look at all that green grass! It's unbelievable. So, most of the days the kids were outside running and playing. 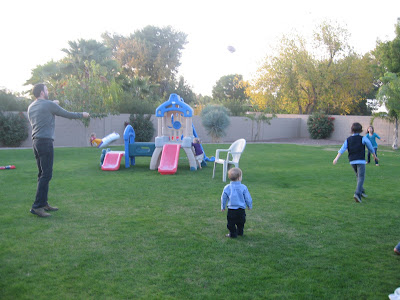 One day we went to Gavin's Aunt Nancy's home. It's on a citrus farm...and let's just say it's every child's dream come true. Seriously..if my kids had a choice between Aunt Nancy's and Disneyland, they would pick Aunt Nancy's. Here's why: 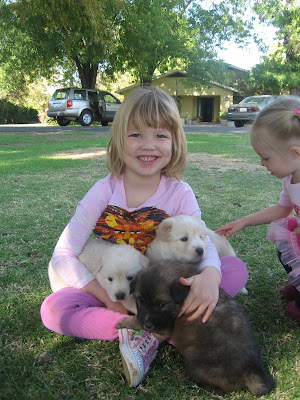 Puppies, puppies, and more puppies. One for every girl and boy. 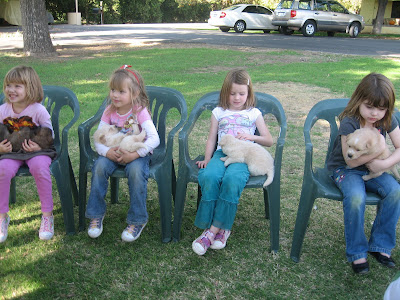 How these little rolly-pollies did not end up back in our suitcases, and on the plane back to Utah, I don't know. 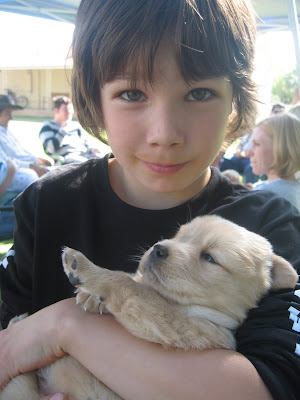 Did I mention that my daughter is OBSESSED with puppies, and has been for the last year, and these lumps of goo were the cutest puppies we'd ever seen in our lives? 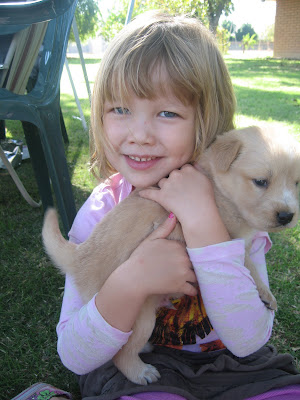 And there was a curly haired puppy poodle...just in case you needed more cuteness. 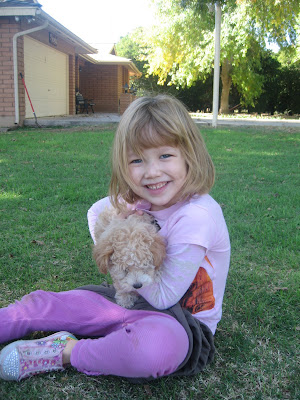 AND there was a white horse that Shelby and the other kids got to ride BY THEMSELVES. Because horses are nice, don't get me wrong...but white horses...are like the queens of all the horses, don't you agree? 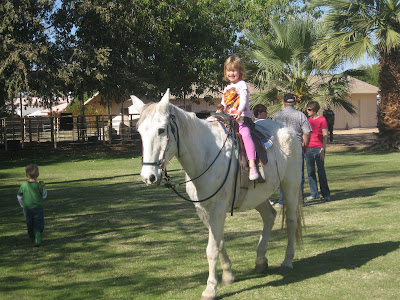 Here's a picture of the boys playing football on Karen's lawn at night. 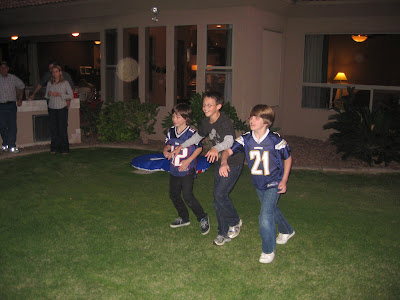 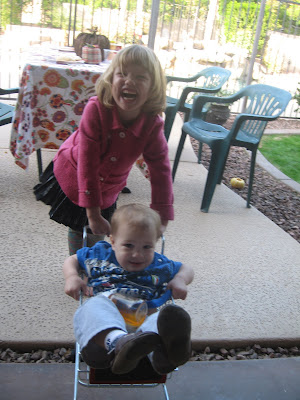 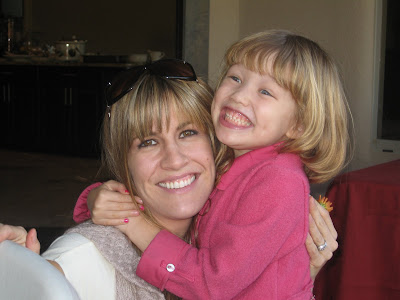 So, I didn't take pictures of the food...but let's just say it was perfect. I mean, as good as you can imagine a Thanksgiving meal..and that is just how good it was. I think that when you have Susan around, it's a guarantee. There were two different types of turkey. One was baked, and the other was barbecued by Marc with some special Asian sauce that I am still dreaming about. There were Megan's sweet potatoes that were more of a desert than anything. There were Karen's creamed onions, Martha's pecan pie, and amazing homemade rolls with (of course) homemade jam. There were tons of mashed potatoes, with gravy. Karen's amazing cornbread stuffing.

And the deserts...OMG...to die for. I was having chocolate silk pie for breakfast the next morning. I could have just snuck away to a corner with that pie, and her banana cream pie, and a Dave Mathews CD, and that's all the romance I need thank you very much. 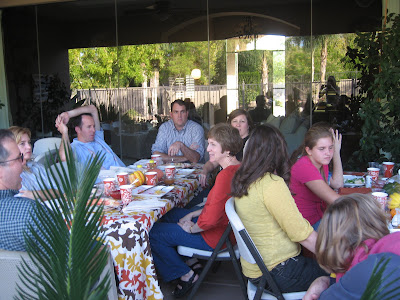 We sat out on Karen's back patio and ate and visited. We toasted to the joys of being together. Munchkins and all. 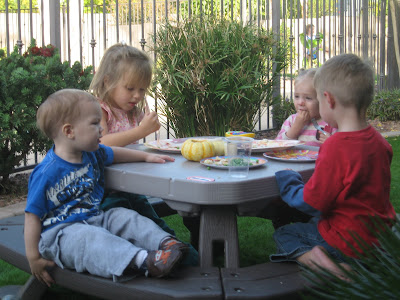 There were a lot of smiles. 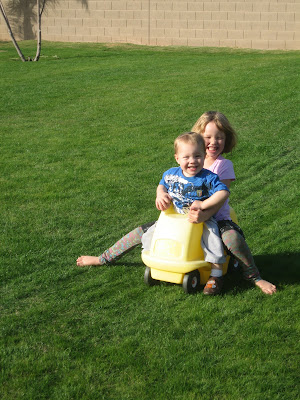 The boys had sleepovers, played a lot of video games, played outside, laughed A LOT, and ate a lot. 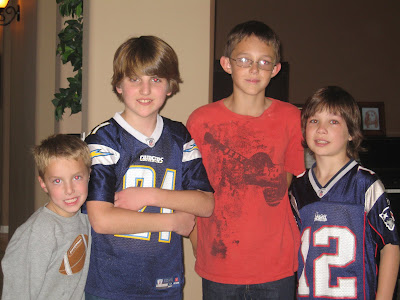 The one bummer...seriously, the one and only bummer- was that Shelby and I were sick. I know! Have we had a completely well family since summer?...I don't think so. I had been on the fence about whether or not to even go to Arizona. The doctor had told me if I didn't have a fever, I was not contagious. Too late. Shelby was infected by day two of our trip..which means that she probably infected the entire clan by day four.

Gavin's family is beyond kind about this type of thing. His Mom, Martha, told me that in the winter you never have a time when there's not a sick kid- it's just the way it is. For them, coughing kids walking around with noses running, is as much a part of life as eating and drinking. It just happens. In my family, we have had a much different attitude towards illness. Like, you might die at any moment, so you must go to bed and quarantine yourself, and not breathe in any one's direction. As if that really does much good, other than being a complete act of frustration. So, I did the opposite of what I would normally do, and I came to Thanksgiving with the remnants of cough.

As I type this I feel awful. Like admitting that I snuck out at night and went to the nuddie bar, where I feasted on small children and read communist literature. So, we are back at home now where Shelby is just getting over her cough and the baby was up during the night because he had just caught it. I have some major atoning to do, for bringing that bug to the masses. Just go ahead and send me SARS for Christmas. I deserve it.

I love your blog and always enjoy reading it, but this post just made me laugh out loud. When I read the part about Garrett and Savannah I about spit out my water I laughed so hard! We have a little cousin that used to strike fear in Ellie's heart, so I get it.

And how is it you look so beautiful all the time?!?! Amazing!

Keep up the great blogging, and so glad you had a lovely Thanksgiving!
love,
suzanne

I laughed too and I am only remotely related to you. Gavin's hair-do is definitely a do not repeat. That made me laugh the hardest. I love your honesty.

I have mixed feelings about family and sickness too. WHen you are traveling...what are you going to do? You can't exactly suspend all your plans because you have a cold. On the other hand it is really not fun or funny when you come down to stay with family where one family has lice and someone else has pink-eye...not to mention coughs and little stomach viruses here and there. Totally happened to us this year. :)

hey thanks for thinking my house looks like it was in Architectural Digest! flattered. Because some days Marc thinks it would be more appropriately featured on that show "Hoarders" because I can't seem to get the closets, etc. quite unpacked and organized.

we L.O.V.E.D. having you guys here and had seriously the most fun Thanksgiving that I can remember in a long time. Pencil it in again for 2010...except this time we won't forget to go to United Food Bank. :) oops...

At least Susan knows what to get Gav for Christmas this year--like some hair product already.

the pictures with the puppies are adorable. i miss you guys!!

Suzanne, so good to hear from you.

Delia, I know!...such a hard one on the travels and sickness. I am hoping that you guys did not come home with lice, pink eye and coughing and stomach bugs. Oy. As for Gav's hair...it's still a work in progress! ;)

Karen, thank you so much for being such a great hostess. Waiting to hear who caught the bugs from your family. Yikes. Thanks for the invite for 2010. Next time we will come germ free.

Sage, we miss you! Come home soon. We miss our best babysitter.