The Chicken or the Egg 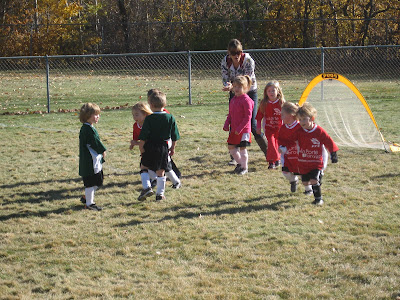 Here I am pretending that I know what kind of a kick the kids are supposed to be doing. 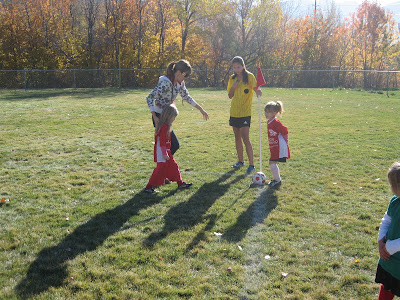 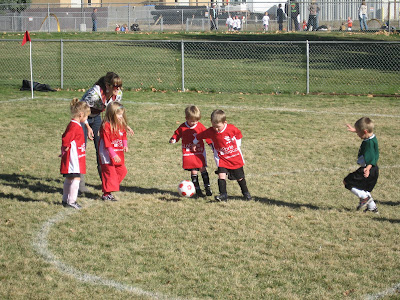 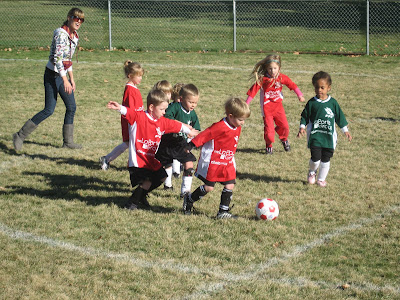 Even though it looks like I am physically abusing Shelby, I was actually shaking her because she had just almost-scored-a-goal, which in our book was pretty much the same as scoring-an-actual-goal. 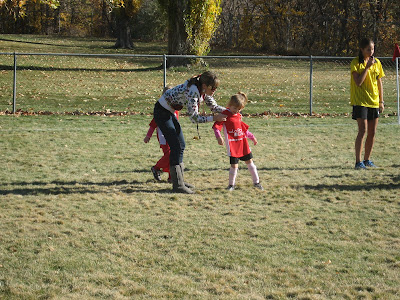 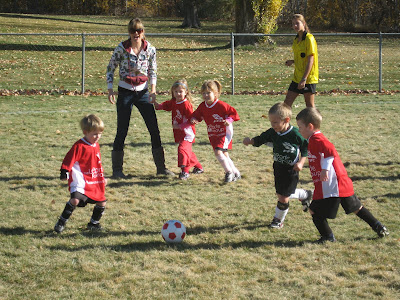 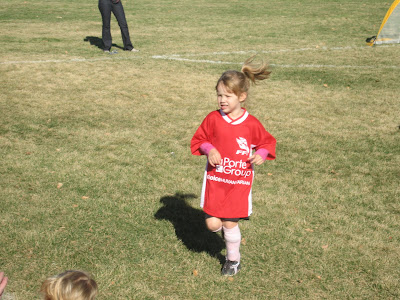 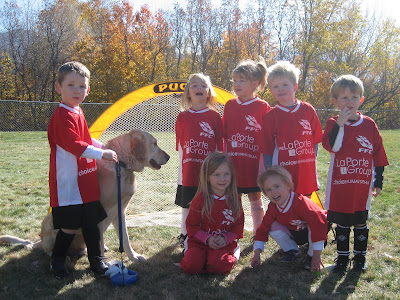 Does thought follow action, or does action follow thought? The other week I was coaching Shelby's soccer team. It's something I willingly signed up to do during a period of temporary insanity..envisioning numerous bonding experiences between my daughter and I, in which she would see her potential as a physically coordinated and multi-talented girl, and see me as the vehicle through which all good in the world is delivered.

Didn't go quite like I had imagined. Maybe because one of the kids on the team was about the age of Garrett. Her parents were foreign..which I don't mean as an insult..or even to explain..but just to point out. Because they did have an accent of some type, but I think that their former place of residence must have been, oh-The Moon..because they had lobbied for their just-turned three year old girl to play on a co-ed team with four and five year old kids. Yeah..makes a lot of sense doesn't it. So, when this little player is not needing her diaper changed..it's super fun to try to explain to her which way to run, or what it means to kick. Idiot-Moon-Parents. And they are just Martian enough to yell at said three year old on the sidelines, and ask her why she's not playing well or in to it like she should be..as if said three year old has any idea what the Hell her Martian parents are talking about.

Then there is another player who was also three, who would get distracted by the lines on the field..or that she could see herself in my sunglasses..or whatever other fairy or pixie she was thinking about. HULL-O people, three year olds should not be playing soccer on a team. They need to be watching Barney for crying out loud and drinking warm milk from a sippy cup.

So..at the beginning I kind of hated the whole experience. Well..let's just be honest- it totally sucked. And for a few reasons..one of which was the fact that it was like pulling teeth to get my daughter to play. Each Wednesday when we were getting ready for practice, I was bribing her. And each Saturday morning, before our games, it was painful. There were two weeks when Shelby was too sick to play..so I got to go put up with the torture, without even having the benefit of the bonding with my own kid.

And oh, how we bonded. Most practices would begin or end with Shelby stomping off the field, proclaiming that she hated soccer and never wanted to play again. This was usually after someone touched her ball..or touched her body..or looked at her. How dare they!

When her life was not ending, due to the pains of being forced to play a team sport, she tended to be the most athletic girl on the team, and the one who could score the goals. After a few good plays, she was proclaiming how much she loved soccer. And then there were the boys on the team. They were a silly lot..who kind of just saw the girls as big mosquitoes who were in their way, and needed to be squashed or ignored.

The games were another level of painful for the fact that I had no idea what I was doing. I could do a heck of a team cheer. And the snacks were great. The kids had lots of self-esteem and a super cool team name. But when it's time to do a corner kick, I'm like, "What the?" The cute high school refs had to show me where the ball goes, and what I am supposed to do. While the other coach is looking at me like I am a nincompoop.

So, one day we are playing a game..and I am running along beside these little rag-a-muffins, cheering them on as they steal the ball from their own teammates and kick towards the wrong goal...when I start to like it. I start to like them. I am horse from cheering my guts out. And we are not winning. But they seem to be having fun. Even though one little player is dressed in her lady bug Halloween costume and can't see out of her hood. And one of the three year olds is off picking weeds. And our one star player has stolen the ball from everyone on his team and made another boy cry. And half way through the game Shelby tripped, and landed flat on her face, which was the end of the Earth and she stormed off the field crying and yelling that she wanted to go home...so loudly that I had to have another parent stand in for me, as I went to comfort her. Even after all that..it was still kind of fun.

I had a parent from the opposing team tell me that he wished his kid's coach was more like me...because our kids were having fun. And I guess I looked like I was having fun too. I thought that they were all on to me that I hated the game, and their kids, and my kid. But I guess I must have fooled him..fooled them all. And in the process, fooled myself.

So on this last game day of the fall season, I was a bit melancholy. The dry colored leaves were falling, and gathering in piles. The crab apples were staining the sidewalk as we dribbled the ball out of the field for the last time of the season. And looking at my little pink-cheeked daughter, who felt like a million bucks because she had just had such an awesome game where she'd run fast, and almost scored a goal, and had really great treats... I was sad to have the season end. I was sad that this was the last Saturday for a while that I would be rising early to go herd some cats, and help them to feel that they were the best soccer players on the planet. I was genuinely going to miss it all. And who'd a thought that a big faker could end up being the one who got faked out in the end? 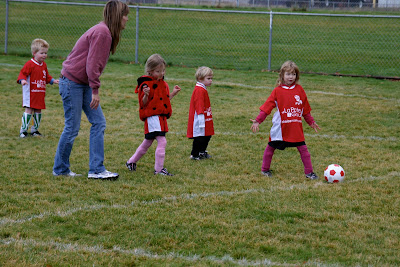 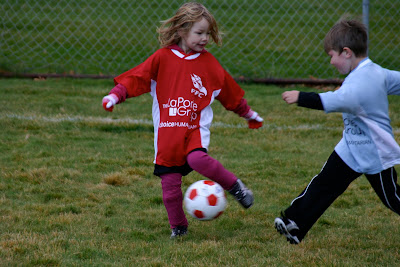