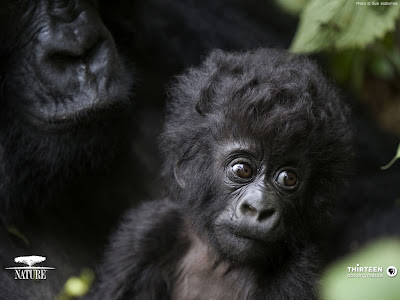 So I am watching some PBS special about animals. And I mean, really- how many flippin PBS specials ARE there on animals? It has gotten old for me. I mean, woopdy doo, some wart hog is being eaten by a lion and I get to see it's guts flashing all over the screen. Thanks for the reminder that I live in a protected world that has no concept of nature or the animal kingdom..and now I am going to go back to eating my steak.

But in our house, if there is a PBS show on animals, we are going to see it. Why? Because cute Gavin likes to check the guide on the DVR, and then record them all for Shelby, who is obsessed with animals. And so when there is nothing but BYU devotionals, Flapjack, and Bob The Builder on (none of which she would watch without a knife to her back) I have the back up of the million PBS specials.

So, I am watching one the other night. And the only reason I am watching it is because it has been left on, and I am folding clothes on the couch and I can't find the remote to change it to MY DVR'd episodes of Oprah or Mad Men. And then I find myself paying attention to what is going on. And they are showing the emotions of animals.

Now, I grew up in two worlds. One with a Grandfather who was from a farm. So animals to him were good for eating, or working, and that's about it. If they weren't good for those two things, then they shouldn't be on the earth. And that was his conviction. Then there was my Dad, who was a repressed hippy from the sixties. He would save a moth, if he felt that it's life was in danger. As you can imagine, these two people mixed like oil and water. But that's another story.

So, I am watching this show about animal's emotions, and my first thought is pish tosh- animal's emotions smotions. Can't be anything like my ever-so-sane-and-stable-emotions. But the more I watch the more fascinated I am.
Did you know that mother chimpanzees who are lower on the social totem pole (because there is a serious pecking order with chimps) do not let their young venture far? Where as strong females in the group are fine letting their children have some room to roam. ISN'T THAT FASCINATING!? Really, I am amazed. So, the mother chimps who are insecure, do not let their children out of their reach. We aren't talking newborn infants, we are talking kids who can get around on their own. And it shows how after a few weeks of this it teaches their chimp kids that the world is not safe, and that they are not allowed to take risks. OMG.

The mother chimps who are confident, let their kids off their laps...to go explore, or to be groomed by Grandmother chimps, or to run around and play. And these actions teach those kids that they are independent enough to thrive on their own. If you could have seen the image of one darling little chimp, being smothered by this young insecure chimp mother, while he desperately tried to break free of her grasp, and she just tightened up and refused to let him go...it would have broken your heart. Hits a little close to home for me.

Then there were these lemurs. And did you know that baby lemurs can not hold on to their mothers? What the!? There is NO way for the mother to walk and carry her young. Can evolution please do something about this, and quick?! So the mothers have to choose between staying safe and abandoning their new child. Or staying with their child, while the group leaves them so they are alone and vulnerable. Could you die?

So, here is this mother lemur, who is clearly distraught about this decision. And you see her poor little weak furry baby whose head is bobbing, trying to find it's mother. And the mother keeps stroking the baby, and bonding with it, as the group walks away. And the mother calls for the group, and they don't stop. And the baby is calling for it's mother, who is torn. And how you know the mother is torn, is that she goes with the group..and then she returns. And she mothers this little lemur. And then she goes off again. And returns. And she does it seven times. And each time she leaves, it's like it's tearing her heart out. And then finally she doesn't come back, and she is following the group, but is clearly distraught.

And now I am clearly distraught over this, and am wondering how any lemurs even survive, if all these mothers are having to leave their young.
It showed Orangutans who only have a child every eight years, to give it the care that it needs. It was a show about emotions, and about the emotions involved with the parent-child relationship in the animal world.

Suddenly I get why Shelby is so in love with these animals... because they are like us.
Check it out! PBS Special Born Wild

I'll have to check out these pbs nature shows with Mac so I can slowly try to wean him off his elmo video addiction. Does Garrett get into them at all?

THat is REALLY interesting. Especially since I just had to call the cops on a mom who let her 5 year old wander to our house several blocks away (and we live by a main street, a movie theater and a mall) not just once but many times over almost a month and had been for a while - never coming to look for him ONCE even if he played around our house for hours...not just to my house whom at the time she had no idea who I was or that her son was just knocking on random doors to see if they had kids to play with. Anyway the point. She felt that she needed to let her son out to wander everyday so he wouldn't be so painfully introverted as she is and because she kind of has her hands full with two more small children. So...that one kind of hit close to home. I'll have to watch that one with Owen. Thanks.

I saw that special. I had to go to the bathroom and bawl after watching the lemur bit. I just had a baby, and it was so ridiculously overwhelming to watch that poor little thing just sit there in the dirt looking for its mother helplessly. If the cameramen didn't do anything about that, I will be forever traumatized by it. How could they have sat there watching that and not done anything!?!? I know it's "wrong" to interfere with nature, but come on, isn't it part of our human nature to help the ones we can? would it really disrupt evolution THAT much?? Take it to a shelter, a zoo even, ANYTHING but don't just let it die!!