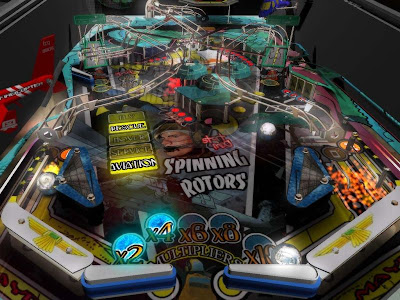 I wonder what it would be like to not have a thought in your head. It has never happened to me. My mind is constantly whirling. I tried meditating a few times...and it was torturous. That probably means that I should do it more often. But I probably won't. At first I thought of my scattered thoughts as being a hamster on a wheel...constantly spinning. But I think it is actually more akin to a pinball game.

The thoughts, like the balls, are always in motion...whizzing by, ricocheting off the walls. They may not be in the forefront of my mind at all times, but they are always in play, racing around. And it seems like there are always new balls being thrown in to the game. There are a million lights, and buzzers, and tunnels to distract me. Holes for my thoughts to temporarily fall in to. And so I have to keep them all in play, at all times.

I don't appear so, but I am always afraid that a ball is going to fall through the cracks. And the truly sick part is that I am the one who is always putting new balls in to play. As soon as there is a moment of silence...the balls are all accounted for...I bring in a new one, just to mix it up. Because what fun is the game if there is not a high level of panic associated with it?

And so this brings me back to the medication discussion. I have never seen a doctor. Are you kidding? I am lucky if I can remember to bring Garrett in to get him immunized on time. But in my mind here is the thought that I am having lately, "Do I want to chill out, and not be worrying about the balls in play so much? Or do I want to be extra alert so that I am always on top of my game?" Cause it seems like there are two options. And maybe I am mistaken because I am not a drug expert. But as far as I know, I can get a drug that works like pot. It would be an anti-anxiety drug. I would be more chill. "So what if a ball goes out of play? Is that the end of the world?" It wouldn't be if I were taking the drug. But right now it does feel like the end of the world, in my wound up, exhausted universe.

The other option would be something akin to speed. It would be like an ADHD med that makes you hyper alert and aware. I actually have taken these before. And I had mixed feelings about them. You are "in the zone", so to speak. What you can accomplish or crank out, with the help of these meds, is extraordinary. They are truly performance enhancing drugs. Your memory is crystal clear, you retain huge amounts of information, you are on task, and you need next to no sleep. Your appetite is diminished. I mean, who wouldn't want those side effects?? Skinny, smart, accomplishing, and doing it all on a few hours of sleep. Only problem is coming off them. You can hit a wall. And when I say "You're in the zone" I mean it. The problem is, that things that are not "in the zone" do not exist to you. So, you kind of seem like a zombie to everyone but your boss or professor. And you look like the Energizer Bunny..always wound up a little too much.

While I would LOVE to be able to retain more while studying, and be more focused, I don't know if the pros outweigh the cons. And as to just chilling out...I don't know. I mean, I bet that the kids and Gavin would love that. The stick officially being pulled out of you-know-where. But, if I am barely able to accomplish the things I need to right now (cleaning, cooking, errands, studying) how on earth am I going to do it if I am living in the land of perpetual-chill?

Maybe it's worth it...Living in chaos, but existing in peace. So, I don't want to stop playing pinball. I just want the tools to play it better, and enjoy the game more while I am playing it. And for heaven's sake, will someone please hide the extra balls, cause I can not stop myself from throwing more in to the mix. Enough already.

Email ThisBlogThis!Share to TwitterShare to FacebookShare to Pinterest
Labels: losing it