Here are the three musketeers, excited for their first day of school. No idea why his buddy had an umbrella, since it was 95 degrees and sunny...no matter. 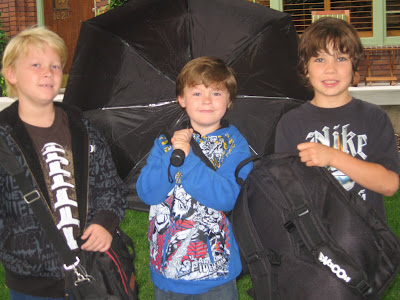 Dalton picked out his own clothes, like always, in case any of you wonder about his "creative" combinations. He is in to the "skinny jeans" this year, and I guess he is putting his own twist on them with the Capri style he's fashioned. The Vans were his dream shoes, and he switched out the laces to make them cooler. He is currently looking for a friend to trade laces with- something that the kids do- so that each shoe is different. Oh, I am SOO out of it. The white thing hanging down is a belt. And the shirt is three years old. He's definitely got his dad's eye for fashion! 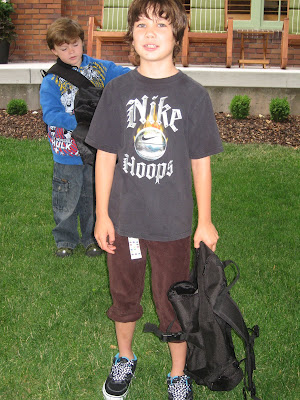 I asked him which direction he wanted to walk, since from our house you can walk east or west and round the corner to get to the school. He can only walk west with his friends. If he wants to walk east, it has to be with an adult, since there are businesses, and it's busier. Moms were not invited, but he wanted to walk the "cool" way. Once he saw that his friend's mom was coming, I got the green light that I could come too (try not to look excited...keep cool). It was my first day of school as well...yay! 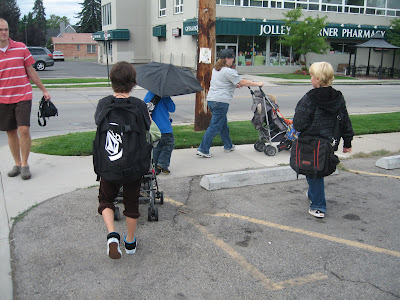 Once he saw that his buddy's little brother was coming in the stroller, he wanted Garrett to come along too. So, lucky Garrett got to be the cool accessory for the morning. 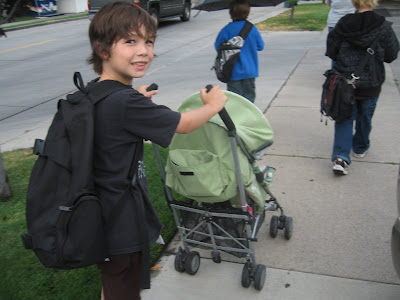 Garrett was getting loads of attention and was loving every minute of it. He thought that people had finally gotten wise to the fact that he is an eight year old, even though he is little for his age. Look out world, here he comes! 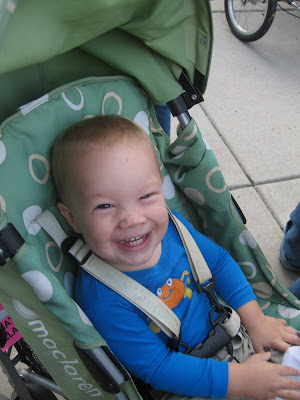 Dalton saw some of his buddies that he hadn't seen, oh- I don't know, for a whole week! It was magic, being reunited after only seeing each other every day of the summer for sports camp, and tennis lessons, and play dates. 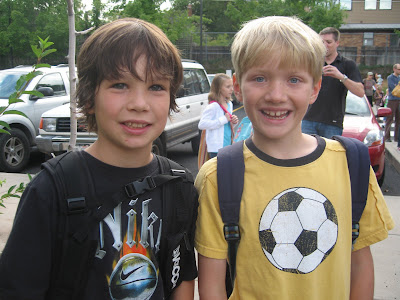 And here she is, their magic angel...the best teacher in the world. It is because of this woman that Dalton likes school, and thinks he is the smartest kid in the class. We LOVE her because she has a strict "No Homework Policy", that we strictly adhere to. She also knows that the kids get antsy in the afternoon, so she does snack time...so smart! 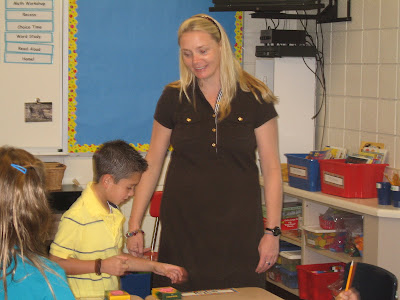 Dalton showed off his baby, and found his locker. He had a special lunch that he had helped to pack. He had a new backpack that a skateboard can attach to. He had a new hair cut, that was "skatery", and felt very cool. At the end of the day, we walked with a group of his buddies, to the Snow Cone Shack up the block, and all celebrated the first day with a mountain of sugar. They gabbed about all of the first day things, and the Moms chatted about PTA and SCC, and all of our first day things. It was a good day.

Give Dalt a back-to-school hug from us! (just not in public) I wish we still had that no homework policy here in AZ like we did in Iowa. you are so lucky.