OK, so I was in Boston. Oh, Boston. Whenever I think of Boston, I think of that James Taylor song; Carolina in My Mind. (or whatever the official title is). But I substitute Care-oh-line-ah, with Boston. I feel that I am entitled to do this, seeing as I have lived in a Carolina, and Boston is much better. So, I go around humming, In my mind I'm go-in to Booooston. Can't you see the sunshine? Can't you just see the moonshine? And ain't it just like a friend of mine to hit me from behind. Yes, I'm go-in to Booooston in my mind. I have no idea if these are the real words or not. It does seem odd that James Taylor would have an affinity for something that feels like a friend who hit him from behind. Regardless..this is the soundtrack of my time here.

When I get in to town I see Gavin, who has just returned from a work retreat in Maine. So, right as he pulled up in front of the hotel, he turned right around and drove me to my dear friend's house. And you could tell that he had been in the car a long time, cause he kept making unnecessary observations. Like, "Can you believe that there is a stop light here!" And "We have been through four blocks and have hit four red lights...this is insanity!" They are statements that are completely true. But for people who either love Boston, or have come to accept it, you see the insanity and just learn to live with it. Like three seconds later when he said, "So, are there two lanes in the road, or five?...we'll never know because there is not a line to be found." And again, in the world of sanity, that would be an astute observation. But in Boston, you are just pissing in to the wind if you are in the mood to have any type of efficiency that makes sense.

So, I got dropped off in a darling suburb, just outside of Boston, to see my friend. And we laughed as we watched Gav try to back out of her driveway, with his rental car, doing a 16 point turn. Poor guy has no peripheral vision and is practically night blind. He finally made it. We went out for dinner, and chatted. Boy, I had missed her. She can be like oxygen for me. And I didn't really realize it till I moved away. But she has been a lifeline for me. And so, after much talk and laughter, she dropped me off at my hotel in Brookline.

The next day I got to lunch with her and another good friend on Charles Street. Now, when I say Charles Street, what I really mean is CHARLES FREAKING OUT OF THIS WORLD CHARMING STREET. Oh my Gosh. I would sell my soul to the devil for this street. No question about it. In fact, let him know it, if you see him. It is quite possibly my favorite street in America. Narrow, bumpy cobblestone streets, that are more like paths, winding their way through the neighborhood. Tall thin brick row houses with black shutters, and window boxes spilling over with chartreuse potato vines and impatiens, line the streets. Windows with lavender panes, from a by-gone era of leaded glass. Street lanterns that flicker with gas-lit flames. Little shops dotting the street with high end boutiques, and old fashioned drug stores. Flanked on one side by the Charles River, filled with rowers and sail boats, and the other by the Boston Public Gardens. In my next life (meaning my 50's) I will live here.

So, we lunched at Toscano. Am-ay-zing. Thank goodness one of my good friends is a foodie. She picked a gem. I walked through Boston Commons to get to Charles Street. 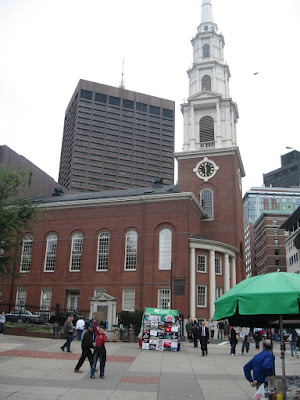 On the way I passed this girl. Bless her heart. If she is looking for a hug in Boston, she has come to the wrong city. 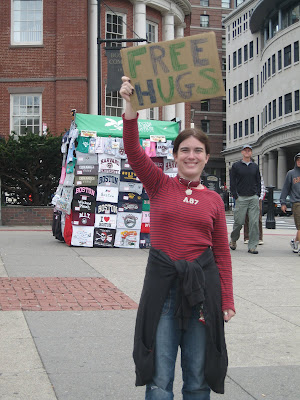 The whole park was filled with artsy, name tag wearing, movie people milling about. I later learned that they were shooting a Tom Cruise movie. Too bad that I am about as interested in Hollywood Stars, as I am in a bunion removal. I heard that he got the Zakim Bridge on the freeway closed for a chase scene too. Oh, good. Glad to know that the city can quickly get things done on the roads when a four foot movie star is the driving force behind it. See Romney, that was all you needed. 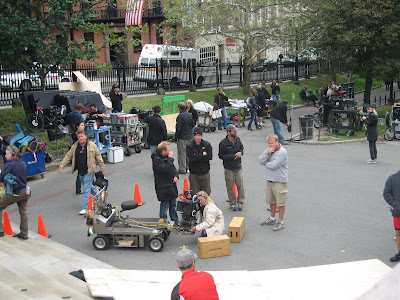 After a lovely lunch, I headed back to Brookline (my old stomping grounds) where I met up with another wonderful friend. We met at the school where her boy goes, and where Dalton would have gone, had we stayed in Brookline. This is the darling original schoolhouse that they have kept on the school grounds. Could you die? The claim to fame, for this school, is that JFK was born around the corner from it. 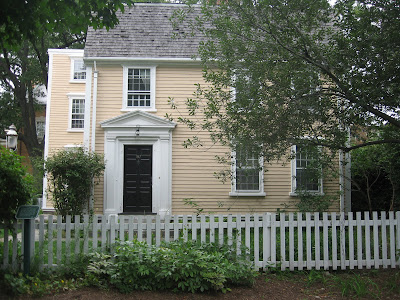 Here is my beyond beautiful friend. Tea, and a park bench is all we need. That night I met with two sweet old friends for dinner. We went to Davis Square, which is just outside Cambridge. I took the T (subway) and went the wrong direction. Sadly, I felt like the total tourist that I had tried so hard not to admit I had become. Once I switched trains, I found my friends, and we ended up at a funky little Indian Lounge. The tapas were great and only $1 a piece. I am sure that they were subsidized by the price of alcohol, but we were a dry table. So, their loss. We ate, and chatted. It was wonderful. 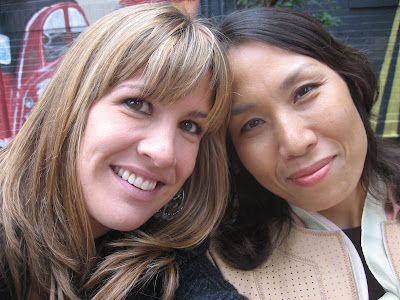 This is another friend's home. I met her the following day. She doesn't know I took a picture of it while I was waiting for her. Sorry love. I won't tell you her name so that you don't hate her...like I wanted to when I first saw it. I also won't go on and on in gory detail about how fabulous the inside is, or how sickeningly cute she is, or how she has the funnest life, and the best eye for design, or any of that. Because, again, I don't want you to hate her. And it is only that I am so incredibly mature, that I can genuinely be happy for her and love her. And I do. Even though times may change, and we have changed, she is the definition of a gracious friend and thankfully that has not changed. 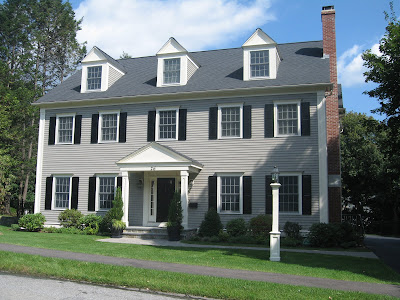 Oh my gosh, can you believe that I am still going? I met up with another friend that I had not seen in at least five years. And that was magical too. Gavin and I went out to dinner at Mistral, in the South End. We had a thin crust pizza with truffle oil, mashed potatoes and thinly sliced fillet minon that was out-of-this-world.
After four years away from Boston, I found myself a little nervous. I used to be so confident...so hard. No matter how bad the road construction, how confusing the roads, how incompetent the drivers, how sketchy the public transportation- I could handle it. I was balsy. Really..just naive, when I look back on it. But I fashioned myself as being a brave woman who could take on anything. And on this trip, there were times that I felt nervous. Imagined myself being held at knife point on the T. Thought that I might get mugged at night outside my hotel. I have turned in to a total suburban loser. I am a wimp.

And, like a boyfriend that dumped you years ago, the image of Boston was indeed sweeter than the reality. Don't get me wrong. He was still one hot boyfriend. Oh, the times were good. But, you just see now, without the rose-colored glasses, that he does have a zit or two. Like the weather...and the traffic. And that's about it. Just two zits. Aside from that- still perfect. But, they are some pretty rockin zits. I was never warm, the entire time I was in Boston. I think I took a bath every afternoon I was there. It made me remember that when I'd lived there, from about November until May- a constant chill hung in the air. The huge trees that lined every street and blanketed the skyline with foliage, were somehow haunted looking in the winter, with their enormous silhouettes casting dark shadows over everything, making the town seem like a setting from The Legend of Sleepy Hollow.

As soon as Spring did decide to grace everyone with it's presence, it was magic. But the months that you spend waiting, can feel like a slow and wet death. And the traffic- again, you just don't drive. You walk or take public transportation. Otherwise, you are insane. So, seeing the ex-love-of-my-life, without my rose colored glasses, was a good thing. It made me long for him a little less. But, again, I plan to take him back in my second life; when his zits and mine, aren't quite so noticeable.

What a wonderful vacation! Never been to Boston, makes me want to go.

If you wanted to know...

I changed my blog address to: