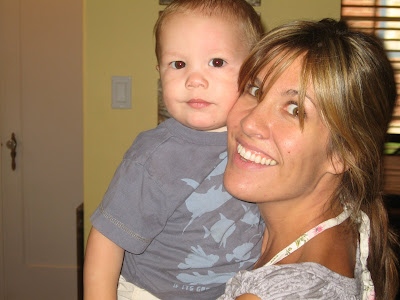 Took Garrett to the doctor yesterday. Wanted him to check out Garrett's ears. Seems a bit panicky, I know, but you understand why I do get a little bit panicky with my boys/fevers/and their ears. "Perfectly clear..both of them...And his throat is fine," the doctor tells me.

His temperature had disappeared at the doctor's office. The night before it had been 103 degrees. And the Tylenol/Motrin that I was alternating didn't seem to be doing much good. So you know that post about me hoping for a good nights sleep..yeah, didn't happen. I ended up with a sweaty, crying, bottle-sucking, circle-turning baby curled up in my arm pit sleeping next to me in my bed, when I wasn't refilling his bottle, or administering a Tylenol dropper.

Next day...I have no recollection...I think that I got out of my pajamas at noon, or at three...either way, it was late. So, the doc tells me that it's not swine flu, or his ears, or really anything. He seemed a bit suspicious, considering that Garrett's fever seemed to have mysteriously vanished about an hour before our appointment, and he was laughing and playing with the doctors stethoscope.

"Where's the sick baby" the doctor was thinking. I know he was thinking this, because I was kind of thinking it myself.

I told him, "He was really miserable last night...REALLY miserable."

"Well, it could be Rosiolla." He said that if that's what it was, he would have a few more nights of fever, with the fever going away during the day, and then a rash would break out all over his body. It was a virus..so there was no medicine we could give him. And that was the end of the happy-sick-baby-mystery.

And so he did have another wild night with a high fever...that again sucked. But so far, no rash. And tonight, he didn't seem to have a rash..but I did notice about ten new teeth coming in. So maybe the teeth are to blame. Regardless.. I am really hoping for sleep tonight.

Guess what?...tomorrow I am entertaining. I hope it goes well. I could get a little nervous...I mean, no one wants to be the one that throws the loser get-together. And Murphy's Law says that there will be at least one minor catastrophe. But I must admit that deep down, amidst the angst that tells me I need to get my three toilets shining before tomorrow evening, I am excited.

I am letting these ladies bring their kids...which could go either way. Hopefully I will be too intoxicated from the female bonding, to notice any behaviors that would normally cause my heart to stop. I bet it will turn out great (as my friend Jen thankfully reminds me often).

*oh, and I had a bit of a "conversation" with the PTA president that I will tell you about later...and we went to Red Butte today with a few buddies, and again had a glorious time with the place pretty much to ourselves-lucky us!

Hey, Ashley, I just found your blog and LOVE it. Reminds me of how much I miss Boston. Anyways, Andrew, my little boy, had roseola and it was MISERABLE. I feel your pain. The nurses didn't even want me to bring him in because they said there was nothing they could do.

Don't you hate it when that happens? Not that I want my kids to stay sick, but I do feel like an idiot when they have been miserable right up until we go to the doctor's office and then seem totally fine once we get there.

give the little muffin a kiss from aunt karen. Jackson had roseola at the beach when he was 2 or 3 and he was SO miserable we didn't know what it was, just that he was very sick. and then the rash. I looked it up in my trusty American Pediatric Association book and diagnosed it to my pediatrician, who was like "well, yes, I suppose it could be roseola."