maggots in the tuna

How could I be so cavalier?
How could I not know how serious this was?


I have always chided Gavin about his need to mercilessly kill every one he sees...but now I know...he was right.


I am talking about flies.


They seemed harmless to me. Yeah, they're annoying. Yeah, they look gross. Yeah, I'd heard that every time they land on food they barf on it. But really...could that be true? How bad could they be? They just seemed like more of a nuisance than anything. So, I would ignore one when it snuck in to the house when the door was open. I had also heard that they have a life cycle of like 24 hours, so I figured as long as it was not bugging us, and not on our food, but rather flying around...I was not going to freak out.

Dalton tells me that there is a fly on his tuna and chips (the lazy mom's version of the tuna sandwich). To which I nonchalantly reply, "Well you shouldn't have waited so long to eat it..just swat it away."

To which he replies, "Oooh, there are more bugs."

Now I am starting to get bugged. I am thinking OK drama...how many flies can there be? Are you just not in the mood to eat?

And I notice that the tuna looks like it is moving. Because it is.

Do you not want to barf all over yourself right now?

SO what in the Hell? Really! Am I living in a rotten meat factory? Where did these SOB's come from? I had already washed out the tuna can, so there was no evidence there. But, the rest of the tuna in the mixing bowl didn't seem to be moving. Regardless...I chucked it all. I checked in the mayo squeeze bottle. Poured a big new glob of mayo out of it...and it looked fine.

Is it possible that Dalton was right??? That this fly did land on his tuna and birth some maggots on it, in the space of a few minutes? Did they come from the Costco cans of tuna?...some freak species of fly that had survived being cooked and canned, only to make their debut on Dalton's plate??...the mayo?...the chips on the plate?...the flour from the oatmeal butterscotch cookies that Shelby and I had baked the hour before????

...oh my GOSH, I AM GOING TO FREAK OUT IF I DON'T FIND THE SOURCE! I sift through all the flour...nada. I throw out the bag of chips, throw out the mayo bottle. But I am not at ease.

Because the problem is that not only will they TELL you all about maggots...like more stuff than you would ever really want to know...but they will show you pictures...pictures that will keep you up at night...turn you insane with paranoia at the thought of a fly even living in your neighboring state...because they are THAT awful.

And they start out that awful. You know how even the ugliest person starts out as a cute baby? The fly is ugly from second numero uno. 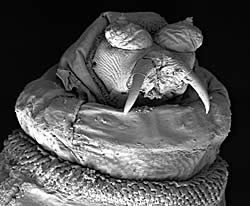 Did you know that a maggot has a mouth on it's ass? It's ass! So that it can breathe while it is sucking up shit all day...24 hours a day.

And it's true...all those "rumors" are true...flies do barf all over you, and your food, to be able to digest it. Oh, the horror. I can not breathe. I think that I am going to die. But not before I get to the end of this maggot mystery.

The only thing, besides a super pregnant fly, that I can think would have produced these maggots, would be our compost bin. It is in our kitchen...near our trashes. It is in the vicinity of where the mixing bowls are...but do maggots fly? Did they hop out of the rotting corn cob, and catch a ride on a fly over to the melamine mixing bowl that I used to stir the mayo in to the tuna???

Why must life have mysteries? Why must I be a pawn in this great charade? So, after reading all about the putrid flies in all of their disgusting stages, I recognize that they do serve some purposes: like cleaning out carcases of rotting animals, and making great subject matter for Hollywood horror films...but other than that, I really do not ever want to see one again.

And the next time I hear that buzzz...I am going to go ape. I am not kidding. You are gonna see the most crazy-out-of-her-freaking-mind-wild-fly-killing-psycho-mom the world has ever known.


It will make Gavin proud.

Email ThisBlogThis!Share to TwitterShare to FacebookShare to Pinterest
Labels: Dalton, day-to-day, losing it

Remind me to tell you my horrific story of maggots I experienced while living in MA. I don't think I told anyone at the time because I would throw up and hyperventilate just thinking about it. Clue: Maggots, dead mouse, my hair. That's all you need to know. So, the doors are always closed at my house....sadly. I'm seriously considering getting a screen door for the fall and spring, even though they are so ugly! They keep out the flies!

i'm completely disturbed by all the fly info in those links! i woke up from a nice nap yesterday on the porch of my in-laws farm to find myself covered in flies. i can't even begin to imagine all the gross places they landed prior to visiting me, blech!

googling tuna and maggots brought me here. bet you're proud ;-) I'm not even half way through and I already want to throw up.
Not sure I can ever eat tuna again. I left a bowl that had contained tuna (it was mostly cleaned out) in the sink for a few days (too much going on to get to the dishes). When I went to do the dishes there were MAGGOTS all in the bowl. I seriously want to die right now. O.M.G.