If there are blogs, or web sites that you love, do tell.
There is nothing worse than being so bone tired that you can not see straight, but you must, out of sheer will power, surf the net at 1:00 a.m. Who knows, maybe you've gotten an email from an old friend, telling you how much she loves you...maybe you can check Facebook and read the minute-by-minute posts from some insomniac that you think you might have known back in High School...maybe you can check on the blogs you always check on, and see if, by the grace of God, they have been updated!


And so, it is during these moments, where I think to myself, "I wish that I knew of some cool new blogs." I know they are out there. I know it, because when I push that little arrow, at the top of Blogger, it takes me to a million people's blogs. Only problem is that they are all in different languages, and about Anamae, or pet snakes, and I don't know- it just doesn't do it for me.


Sometimes, I will come across foreign ones that I can't read...but look really cool, and I'm bummed. Cause I really would like to know what she put in her empanadas, or what the Russian MTV awards were like.


There is probably some Blogger tool, that would translate them all in to English for me, but again- my skills at blogging are limited.


Really, it's sad. About the extent of my skills are being able to do hard returns (and seriously, you have no idea how long that one took me) and uploading pictures.


I want to be snazzy and techy...but it's not really in my DNA. Gavin always says that if I am anywhere near a computer, I can crash it. So, for my birthday, I told Gavin that the only gift I wanted from him, was for him to "pimp my blog".

I think that it took him a second to process it, because he looked at me with a blank stare. "I want you to teach me how to make the pictures bigger, and use our Adobe Photoshop to get red eye out, and I want to have a cool banner." (this is before I begged for the plane ride home for Garrett and myself, which he did come through on...thank the Lord!)


So, he looks at me like I am asking him to walk on hot coals, while watching A Baby Story on TLC, while giving me a foot/back/head/hand rub...yeah, THAT torturous.


He kind of agrees. And then, my birthday morning rolls around and here is what he does: 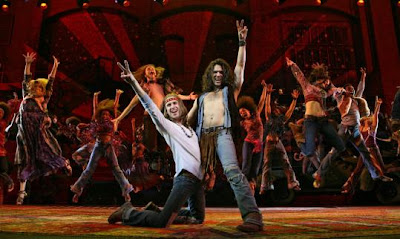 which just won some Tony's and stars Gavin's old mission companion (ha). Which means, when we go to see it, and he will probably jump down in to the audience and jump on our chair, and hump our faces...just for old-times-sake...and because that's what they do in this show.

Now, I haven't asked Gavin anything more about the blog...but I still want it pimped.

You can see that I need pimping, because in order to make that
dang-blasted web address go somewhere, I had to make the
stinkin-fetchin-no-good-paragraph under it link too. I know...I have
problems. But for Pete's sake...it's late, and it can't be perfect.


And, I still want to find more great sites.

http://www.dooce.com/ is my favorite new site.
update: (I know...I am aware that that fetchin-blasted-rotten link didn't end up going anywhere....and after ALL that! I could spit. So, I am leaving it all messed up and crappy like that. Just so Gavin can see how badly I need him to HU-ELP me...and so when I am super techy and bloggerific in the hopefully-very-near-future, I will just look back at this pitiful little post and have a good chuckle...about the good 'ol days, when I was blog-challenged.)

Email ThisBlogThis!Share to TwitterShare to FacebookShare to Pinterest
Labels: birthdays

That is a gem, Nicky.
Thanks!

First of all Happy Be-lated-birthday!! How fun to celebrate in California on a beach. Second of all you probably already read NieNie but it is the greatest! It inspires me to be a better person. I think she had like 250,000 readers so im sure you already know about it but if you don't and need the exact address just email me. Have fun!

Thanks Lis,
I do love Nie Nie too. She is such a beautiful writer!

I've noticed you like comments, so here you go! It is 2:00 am, I am bone tired and cannot get off my computer. Thank the Lord that I have just found your blog and have many entries to read or what else could I possibly do at this time of day?!