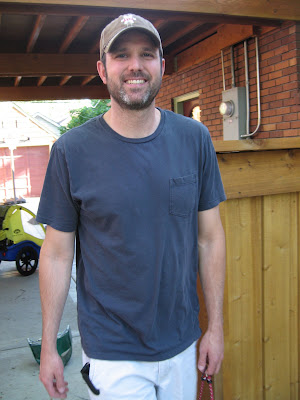 A pretty uneventful day until the babysitter arrived. Shelby and Dalton did call from Grandma's house to wish you a happy birthday. I said we could go anywhere to eat. You wanted burgers from Emigration Market. Blue cheese and bacon are a pretty good combo. Then it was off to REI to get bikes tuned up, pick up "must haves" for our upcoming camping trip, and wander through the isles daydreaming about all of the cool gadgets you could one day have. You got new flip-flops. Then we headed to the grocery store where you stocked up on new salsa and chips (your drug of choice). Next, it was back home to relieve the sitter, put on the movie Appaloosa and have a few cold ones. After the movie, there was a hot steamy romp that nearly didn't start because we were both so deliriously tired. If you are embarrassed reading about the fact that we had a hot, steamy romp then you should not be reading this blog. If you are one of my kids reading this, in the future- you should know that A) it's the way that you got to this Earth and B) even though your dad is getting old, he's still got it.

Now for my movie review of Appaloosa: Mixed feelings. Let me start by saying that neither of us had read the book. Maybe that was a good thing, because I doubt that Gavin would have rented it if he knew what he was in for. So, Gavin felt gypped. He thought that too much of the movie was taken up by Renee Zelweger's character, whom he was completely annoyed by. Her character did make for some interesting/ uncomfortable dialogue- not what you usually see in "tough guy-shoot 'em up westerns" but I was mostly amused by it. I am sure there probably were a lot of characters like hers back in the day. Most women do value security over anything else. She was just a bit nuttier than most. We both really like the actors that were in it..really the best that are around today: Vigo Mortensen, Jeremy Irons (who plays a really good bad guy) and Ed Harris (who also directed and produced it). They all gave great performances. In fact, I kind of felt like I was watching a play, rather than a movie- with the music they chose and the way they filmed it. So, I would say it was worth seeing. It's more a study of characters than an action flick (which is probably why I was pleasantly surprised). There are no big surprises in this movie. Just a "slice of life" story. A theme that was interesting to me was the one of loyalty between the two leading men. It was passionate- the love and loyalty that the sidekick had for his friend. In the end- it's what caused him to make the decision that he did. It was a testament to the depth that men can have in their friendships with other men. Seeing the "wild west" portrayed made me VERY glad I didn't live back then. I would have stowed away on the first train to New York. So, there is my two cents on that film- A nice little picture.