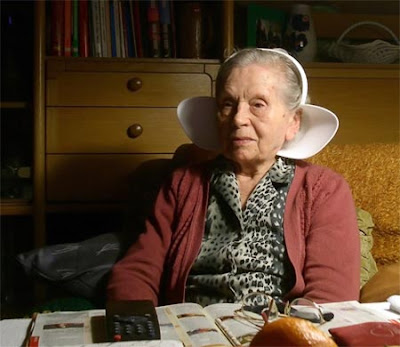 Aging...
After watching the PBS Frontline special, I am freaked out. http//www.pbs.org/wgbh/pages/frontline/livingold/
It's not the death part that makes me sweat, it's the getting old. And not the cute "give-your-grandkids-a-pinch-on-the-cheek" old. It's the ominous aging...the eternal, maddening, stuck-in-your-body (or your mind), with no end in sight aging that scares the bejesus out of me. It is something that no one likes to talk about, let alone think about.

So, of course everyone would like to die in their sleep, at the age of 100, after having lived a perfectly healthy life. But get real. That hardly ever happens, and here's why: we are treating every ailment that comes along, postponing death, dragging out disease, until the body has to practically explode, in order to stop working. We have older people on so many medications, hooked up to so many machines (that breathe for them, eat for them, etc...) that they become these shells, barely functioning and housing some remnant of the individual they once were.

But what if the mind is still vibrant, even if the body is shot to pieces?

Well, in that case, I get why the person and those around them are dragging it out. But in the majority of cases, as the body deteriorates, the brain follows in the same path...maybe small signs of dementia, followed by Parkinson's or Alzheimer's.

So, what, just push everyone off a cliff who is old?

But as for me. I want the option to say "enough". Which seems like a reasonable thing.

But, isn't that playing God?

Yes. But then again, every time you have unprotected sex, take fertility drugs, have fertility treatments, and so on, you are playing God as well. So, why is it OK to play God in the "maker" role, but not the "taker"? Especially if the only life you are taking is your own? I can understand why a parent, who was loaded, wouldn't want their greedy kid to be able to run over and pull the plug at the first sign of the parent's illness. But, that is not the issue. We are not talking about pulling any plugs. We are talking about not having any plugs in the first place. We are talking about the elderly person, having consented long before they were ill, with legal people present, that said person wants to take a few pills when they are through, and leave this life on their terms.
Now, having said that, here's an interesting story. My 90something year old grandfather got ill, went to the hospital, and had to go on life support. A few of the kids said that my grandmother should pull the plug. He was non-responsive. Not sure how long he had been that way, but it didn't look good. But she couldn't. They hadn't talked about it before this event, and she was hoping for a medical miracle. This story really would be much better if I had a mind for details, but the long story short is that he made a recovery...a full recovery...and lived for another 1,2,3 (how embarrassing that I can not remember) years. Whatever it was, it was a gift to have him with us for the extra time. So, that said, would I have been a fan of yanking his plug? No...because he's not me. That is between he and my grandmother. Plus, he did not have an ongoing, long lasting degenerative disease. He had pneumonia. And he was in his mid-nineties.
But, shouldn't God be the one to decide when it's your time to go?

Well, if that's the case, then taking blood pressure pills, or aspirin, or any other medication would be interfering with God's will, wouldn't it? If he were trying to kill you with a heart attack, or stroke, and you prevent him by taking Aspirin, or calling 911 right after the stroke, and getting medical help, then aren't you just as guilty of "playing God"?

And, why would God want to keep you alive for years as a vegetable who poops his pants anyways?

Then he also invented the medicine to end people's lives. Personally, I think scientists created them both.

So there it is, my crazy conversation with myself as to why I think that people should have their free agency to choose how to leave this life. When it's worth living, LIVE it to the fullest, but when you are miserable, with NO END IN SIGHT, then I say "to hell with it" and maybe that's where I am headed with this dialogue I have chosen to publicly air.
If I remember correctly, wasn't there a guy who wanted to get to choose everything for all people?... He had good reasoning. But what happened to his plan?

OK, so my ideal would be this: live as long as I want until I am ready to go...be it 80, or 108, and then I want to say goodbye on my terms. No assisted living, no tubes, no home nurses. When I can't wipe my booty, or call my family, when I can't remember what I ate for lunch (oh wait, that's today)..OK what about when I can't remember who my kids are THEN enough is enough. A few pills, a great drink to wash them down with, and then a really great party to celebrate all the wonderful things I (hopefully) did. THE END (oh, and buried under a tree in the back yard..I know it's illegal, but I think cemeteries suck.)

And if I go young, then take my hair and make braids for the kids. Make a death mask of my face for each child. Donate my useable body parts to science, and bury the rest at home, or close to it. Tell the children that if there is an after life, I will meet them in the back yard, on the swing set. And that I will sleep with them at night, hugging them tightly. I will give up heaven in an instant to be near them. And tell them that I love them. Tell them that they are my life. I will miss them. But, they can honor me by living for me. Tell them to find joy in life and to live life fully. Follow their passion, no matter the cost, and make a difference in this world. Tell them that we may never see each other again. This may be the end of the road. And if that is the case, then I truly had the best path ever, because I shared it for a time with them. Tell them that I know I didn't do things as well as I could have. I began parenting when I was too young and immature. I was too strict with Dalton, argued with Gavin too much in front of the kids, didn't get down on their level enough. As I grew in age and maturity, I regretted these mistakes, and I tried to improve. My goal was to raise children who would grow up to be whole, intelligent, free-thinking, happy adults who would contribute greatly to the world.
I love you Dalton,
I love you Shelby,
I love you Garrett
.
.. to the ends of the earth, and for all eternity...my sweethearts.

Forever- mom
(OK, just so we're clear- I am not committing suicide, nor do I plan on dying any time soon. This is what happens when I post too late at night. I start to go over to the dark side.) :)

Great post!! I agree, my only concern is that as i get older and realize the joy of family, friends,kids, grandkids,wife etc it does make me think tha staying around a while is good, so long as i am not a burden on any of the above. Then i think maybe they are sick of me. I do get joy in knowing that there is an after life and hopefully i can enjoy the same things forever. I have always struggled with the free agency thing, i would like someone else to blame if it doesn't work out the way I want it to. In the mean time it is important to love everyone and do the best we can!!. Love you all.

Dan, good thoughts. Obviously we want you around as long as possible. You probably need to worry more about people not letting you die. No one will want to give you up!