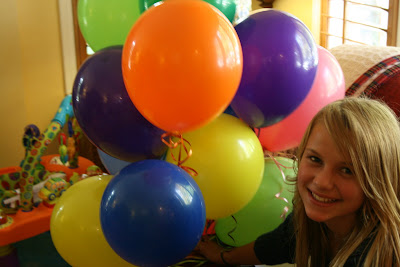 I was an idiot for several reasons:

Number one- I threw her party from noon until two. That is right during her nap, so she was not in the greatest mood.

Number two-I invited WAY too many kids. Let myself feel pressured in to inviting kids that she was not that close to (like two from a new playgroup she just joined). Felt pressured AGAIN when a mother from playgroup asked if an older sister could come to the party as well...I mean, REALLY, WHO ASKS THAT? I was so flabbergasted, that I agreed. You get it. I was nuts.


Number 3- agreed to let my mom help me. Enough said.

To top it all off, Gavin is sick. And you know what that means. It means that he mopes around, acting like he is dying, expecting that I will not give him all the sympathy/support/and chicken soup that he needs, so he in turn, turns in to a primadonna. So I am needing help, and he is laying in bed. I tell him that the baby is up and he acts very put upon that I am expecting him to rise from the grave and get the baby out of the crib. The straw that breaks the camel's back is when the pizza guy gets to the door, I can't find cash and he is saying that my mom can't use her credit card to pay for them, and Gavin is carrying over a table that I am borrowing from my neighbor. He makes some dumb comment about me letting him do all the work.

My neighbor is helping him carry it. So I loose it. I tell the pizza guy to hold on. Run out the door, yank the table out of neighbor's hands and yell some expletive at Gavin. Neighbor fights me on this and I tell her, “No, really. I need to help him or I am never going to hear the end of this.” “Oh my ****!” I yell. I yank the table down the driveway going mock ten (even though it was kind of heavy) to show him what a wimp he is and just how NOT-heavy it is!

The pizza guy is watching all of this, and I am sure that he is hoping that my mental breakdown does not affect his tip. To the contrary. I tell Gavin “Give me your wallet!” He throws it at me, like he is being held at gunpoint. There are two twenties. I think that the total was $25, but I hand the pizza guy the forty bucks and tell him to keep the change. I then slam the door in his face.

So, the party starts. (but before it starts I apologize to Gavin. And thankfully Shelby witnesses none of this, and Dalton, who does witness all of it, also witnesses me apologizing and asking Gavin for his forgiveness) 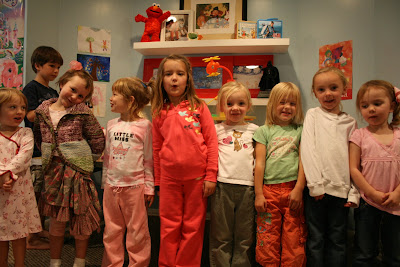 We head downstairs. My mom bugs me because she is getting in my way. Two control freaks in the same room is a recipe for disaster. She wants to cut the cake, she wants to hand out all the grapes, she wants to be involved in the games. I want to tell her to knock it off. She gets the hint.

We play games downstairs. The kids guess what kind of animal I am.

Then Shelby wants to be the animals and have people guess. 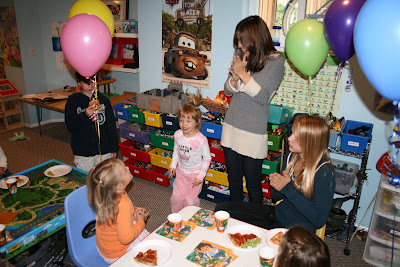 Of course, other kids want a turn,
so that sends Shelby in to a pouty fit. 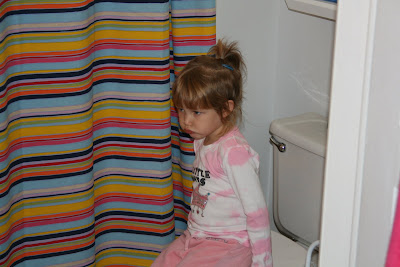 And me being the calm level-headed mother that I am, tell Shelby that if she doesn't come out of the bathroom and be nice I am going to cancel her birthday and send all her presents back. Uhhh :(

So she comes out. She is still in a bad mood. My mom brings down the cake.

Shelby is furious because I put her Diego character on top of the cake.
The day before I had gone to Dan's Grocery store and bought a white frosted sheet cake. I brought it home and had Shelby help me decorate it. We poured green sprinkles on for grass. Put Dalton's Army Men trees on it, blue paste for a river. Then she put all of her small plastic toy animals on it.
Because it was a “Diego Animal Rescue Birthday” I suggested we put the new Diego toy that she had just gotten that morning from Gavin and I, on top of her cake.
She said NO.
So why I snuck it on at the last minute and thought I could get away with it, I don't know.
Anyways, he had to come off. 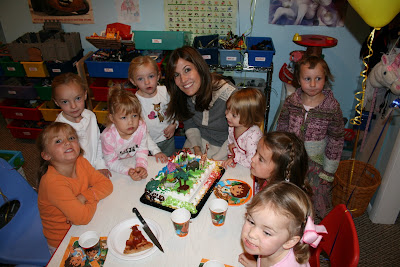 Then we sang “Happy Birthday” (the cha-cha-cha way, which made her smile).
Then she blew out the candles.
Then we cut the cake.
She was happy that she and only she got to lick each animal as it came off the cake.

After that we played an animal scavenger hunt, which was hard for her, again, because SHE wanted to find every animal. So hard to share at this age.
At the end, we found Diego hiding in Dalton's gecko cage.
I let each of the girls hold the gecko.
One little girl wigged out and screamed bloody murder when the gecko was put on her.
That made Shelby scream and cry because she thought the gecko was dead (or scared half to death).
Oh, thank the Lord for presents. I get Shelby upstairs for gifts, and her mood completely changes. Now it is ALL ABOUT HER.
SHE is the ONLY one who gets to open the gifts.
And they were nice gifts. Lots of stuffed animals, horses, just what Shelby is in to. Very thoughtful presents.
I was impressed.
She thanked each girl and gave them a hug.
The high point for her was when she opened the “Fur Real cat” that her grandma gave her. It was this big fat white fluffy cat, that purrs and meows. She has wanted it forever. Well, of course, after that all the other gifts were chopped liver. So I am trying to make her act like she likes the other gifts as she is rolling her eyes and throwing them on the floor.
All she wants is that damned cat. 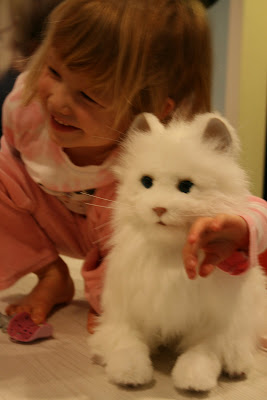 And who can blame her? But still.
Finally, the gifts are done. The party is over. We hand a balloon to each little girl, and their parents come and pick them up. My mom walks a few of them home. I immediately put Shelby down for a nap. Gavin is napping and I even make Dalton take a nap (which he is furious about and is crying).
Of course, as soon as they are all in bed, the baby wakes up. (Murphy's Law) So, I watch the Starter Wife season premiere, while I feed Garrett, and wish that I had a tub of chocolate.

When people wake up, sanity returns. Hannah comes to play with Shelby. Shelby is in a much better mood, and loves all of her gifts. We all eat dinner together (leftovers) and we talk about what we liked about the day.
Shelby is happy that “right now she is four years old! Right now!” She seems happy with her birthday party.
She takes a long bath with all of her new Diego toys. Dalton and Dad play hours of computer games.
When I put her to bed at night, we read a bunch of new birthday books, that she loves.

One about a dog
and the other about a pony.
Dalton sleeps upstairs in her other twin bed.
She goes to bed hugging all of her new stuffed animals, including the white cat.
I sing happy birthday to her again, and tell her about the night that she was born. 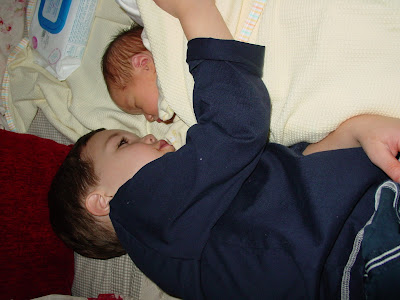 She beamed as I told her all of this. Where have the last four years gone? Where have they gone??
But four is still little. I still have this little sweet hearted girl whom I adore. She is bright and funny and happy. I am so happy that she is my daughter. Really. What a gift she is to me.
Next year hopefully I will be a little less nuts.

Ashley,
This is the best post! Seriously we have all been there, especially on birthday party days! Why is that? Thanks for making me laugh this morning!

October 11 is a VERY good birthday. She is in good company.

Ashley, where do I start. I felt like your post transported me back in a time portal to 4 years ago.....was it really that long ago. Hmmm, anyway You are right, it flew by, you were just telling me you were pregnant with Shelby a few months ago it seems like! That was a long winter when she was born, so glad we had each other to visit with!
Now, for the party. I feel like a pro, when it comes to Hoopes family events. I must assure your readers, unfamiliar with your "parties" that this is not normal.......Oh I wish I could have been there. So glad you can write about it and laugh now. Isn't it so funny how we can plan something fun and great, and the day of wish we were hermits. Ah life. Thanks for taking me back in time!

What a day. Thanks for writing so honestly. We have all had days like that. Someone once told me never invite more kids than they are old! Or you can do what I do... they only get a friend party every 4 years! Yes, that is right. When they turn 4, 8,12, and 16! Thanks for putting a smile on my face.

I love the honesty. What a good idea to tell them their birth story at bedtime on their birthday. We are going to have to start that tradition.

I am SO glad that I am not the only one who goes nuts sometimes. Glad the mayhem has ceased.

Hi! I hope you don't mind my post (I found you through the Lizzy/CJane/NieNie blogs) but I just had to say Happy Birthday to the little Shelby Lynn from me -- the big Shelby Lyn (almost ready to have my 40th b-day) and have a husband and 5 kids of my own now although I do remember my 4th birthday party (thanks to mom's albums). Lovely post! :)

Holy Moly! I did not realize what I missed! It sounds like it would have been fun to watch! :)