Job Sharing works, and so does Kid Sharing

I am so tired.  Not tired like, I have triplets who nurse and co sleep with me, and a full time job, and a husband who doesn't help around the house tired.  No, that would be called institutionalized in my play book.

My form of tired is because I played too hard this week.  Not played hard like the party bus to Vegas where I was DOA (drunk on arrival),  and lost the kids college savings on card games that I didn't know the names of, and wore clothing that could have been better described as tiny sparkly band aids, and lost the hearing in my left ear because of the craziest concert on the continent, and woke up with two out of the following three things: a tattoo of a bird on my rear end, a Latin guy named Julio from the band, and a gold tooth.  No, that would be called mid-life crisis, though to be honest, parts of it are appealing.

I did have a wonderful weekend, but it was not that crazy, thankfully.  It involved my parents taking my kids to their house in Elk Ridge, that we refer to as "the ranch."  To my kids, it should be called Disneyland, because that is what it feels like to them.  Their trip usually begins or ends with a trip to the local toy store (Walmart) where they talk Grandma in to some LEGO set that is way too big and way too expensive.

At some point there will be way too much TV, sugar, running wild, nudity (the kids, not the adults...I think), staying up late, misbehaving, stray kittens, and giant bubble baths.  Luckily, because the weather was pretty, their trip also included a day trip up to Payson Lake where they kayaked and played in the sun.  I am pretty sure that they all went horseback riding and rode ATV's.  My eyes start to glaze over after about the fifth activity where I can imagine their death because of the lack of helmet, sunscreen, or adult supervision, but I try to breathe deep as they retell their grand adventures that Mom would never let them do because she is way too boring (safe).

Well, that is FINE that they had the best weekend ever, because Gavin and I had a great time too.  In no particular order we did the following: we had really good sex where we didn't have to worry about the just-turned-four-year old who lives two feet from us, and likes to pop in to his parents room at every chance he can. 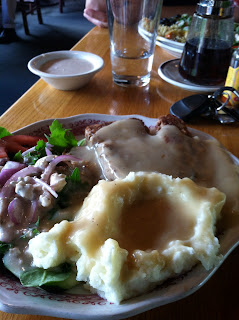 We ate at Silver Fork Lodge up in Little Cottonwood Canyon and had the best homemade meatloaf and mashed potatoes that has ever been made whilst watching the mid-life-crisis club meet on the patio outside as their hair plugs blew in the wind and their Lotuses, Porches, Ferraris and Bentleys kept their egos inflated in the parking lot out front. 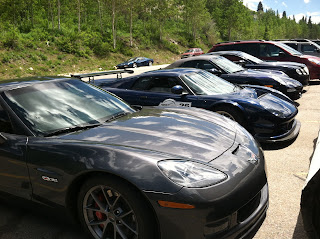 We hiked through aspens and evergreens, up to Lake Solitude on the same runs that we ski on during the winter and saw the old silver mines.  We listened to NPR podcasts together and talked about the Dream Mine that is located close to my parents home, and that we had never known much about as well as mormon membership numbers that seem to be on the decline, unbeknownst to both of us.  We did a sunny and steep climb up to what locals call "The Living Room" above Red Butte Mountain and saw the most gorgeous view of the entire Salt Lake Valley I've ever seen while sitting on lazy boys fashioned out of giant slabs of sandstone that had been constructed by clever and/or drunk U students from the past. 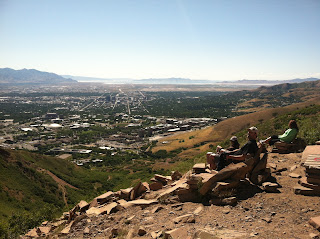 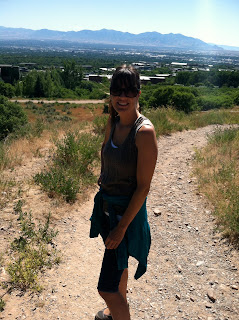 I entertained my sisters in Zion, (aka: the infidels) with our "coffee church" brunch that included the infamous kouing aman pastries.  However, we should probably rename it "coffee day" instead of "coffee church" because it's always well past lunch by the time we tear ourselves away from each other.  We had Gavin's homemade chile verde with cilantro, sour cream and avocado on our patio in sweet afternoon silence.  We went out to go see the Snow White and the Huntsman movie (stupid but oh well because the cast was incredibly hot).  We went to a BBQ with wonderful older and newer friends where we shared our common stories of the delight and peril of growing up mormon in Utah in these "latter days."  We watched our Tivo'd shows together and slept in...it was better than kinky, wild times in Vegas.

The kids got back last night and it was a lovely reunion.  They had baths and Popsicles, and we all watched "Design Star" as Shelby cuddled us on the couch and Garrett and Dalton constructed battles with LEGO's on the floor.  Afterwards the little ones raced to their beds to see who would make it there first and have as their prize their Mother to snuggle with (BOO YAAH!).  I snuggled Shelby and Garrett got Dad.

This morning it was the first real day of summer vacation with all three kids officially out of school.  The two big kids started Art Camp so Garrett and I played in our pjs all morning with cartoons in the background (shhh, don't tell the big kids) and ate leftover chili verde whilst vegging on the couch.

Tomorrow I do plan to get in my gym clothes, and if I find my Kindle, I will use those clothes at a gym.  So, my fatigue is joy-induced, but none the less, I will indulge in a nap today.  The house can wait, as my mental sanity takes priority over the dust bunnies.

As a side note, a new family next door and one across the street, both with boys Garrett's age...oh happy day.

Sounds like a near perfect weekend! Glad I got to be part of it! I'm jealous of all the time away from your kids with just Gavin. One of the perks of having the grandparents close and kids who are no longer babies... someday.