Friends and the last week of school

Throughout my life I have been afraid of losing my friends.  Yet, if I am being honest, I have often felt that there was something missing in the very friendships that I clung to.  That I had to be "on my best behavior" or they wouldn't want to be my friend any longer.

Not the friendships of my childhood, where I lost myself in one or two special soul mates, and someone ceased being just my friend for a season, and instead became an extension of me.

But the friendships of adulthood, which should be easier to come by, and often are because of play dates and story hours and such, often produce fruits that do not stand the test of time.  Families move away, your kids stop being friends, you develop different interests, you realize that that husband did really annoy the crap out of you and you can finally admit it.

I love and value the friends that I have had over the 33 years of my life.  But I must say that I have some precious friends that I have stumbled upon as of late, and I feel as though I have hit the jack pot.  With them I can absolutely be myself...whatever that is at the moment...and they accept me 100%.  That is a pretty empowering feeling.  Talk about girl power. 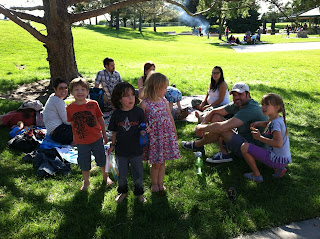 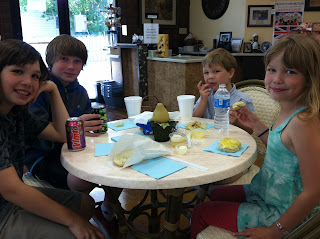 Here is Dalton and his best friend Jack, with Garrett and Sis at one of our favorite after-school hangouts, Elizabeth's Bakery, where we get homemade scones with clotted cream and lemon curd and tea...talk about a fun after school snack.  They usually get some funky British candy or soda too. 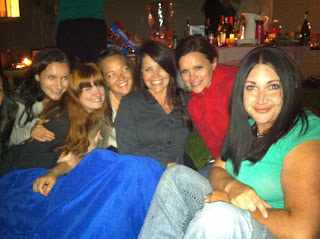 Here are some of my best gals at a fun evening get together. 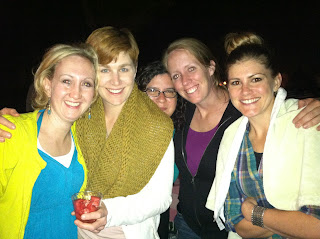 Ahhh, how I love them. 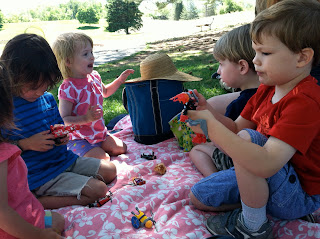 More park action with the little ones. 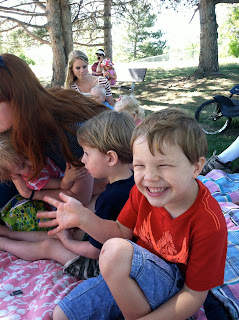 Oh, could he be any cuter?  Just like Shelby, where his smile swallows up his face. 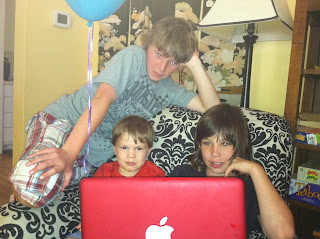 More of the boys, this time surfin the web for video games or lacrosse stuff. 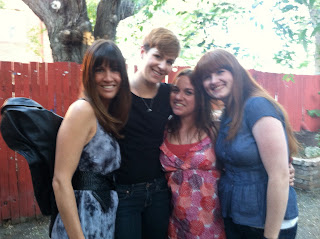 At Kilby Court for a friend's band. 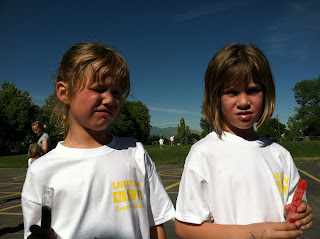 And here we have misery loving company.  This is one of the last days of school for Shelby where she had her Fun Run, and let's just say, the end was not fun.  She was pretty ticked about the fact that she ran so fast once she realized that she could have just loafed it and walked the whole damned way...why didn't someone tell her that she didn't have to give everything 100% effort?!? 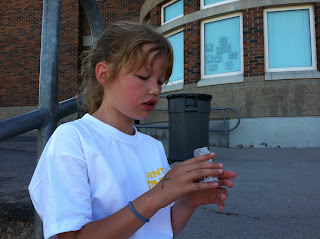 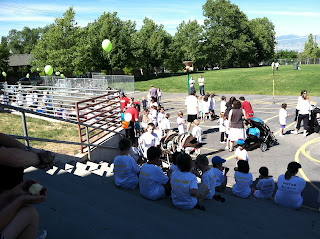 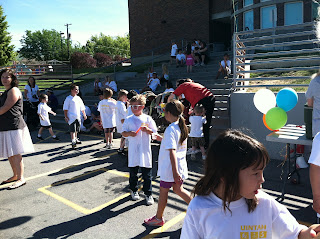 Here are her 1st grade friends, after an otter pop and some water to soothe the pain of the victory. 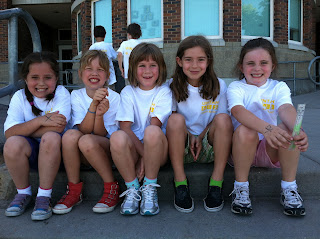 Dan and Mom came to Shelby's final soccer game and Dalton's final lacrosse game.  Aside from Garrett pouring a drinkable yogurt on Shelby's head for no reason, and Dalton's team getting spanked, it was a fun game. 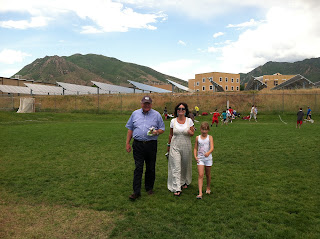 Dalton didn't really think so.  His Alice Cooper eyes show that he was NOT feeling the love with how this last game went.  He did well, but he wasn't happy with the positions he had to play and the fact that he didn't score a goal (even though he blocked like 20 playing the keeper). 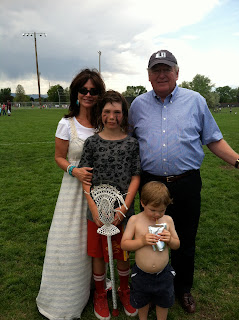 Pizza and watermelon afterwards made it a little more bearable. 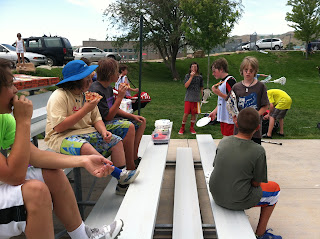 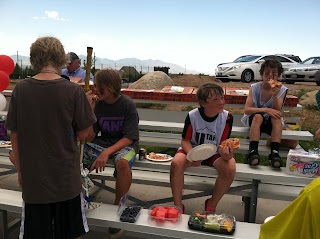 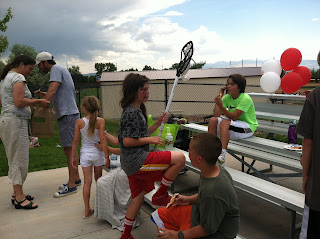 After Shelby's fantastic soccer season ended, we had a party.  Here are the pics from it.  I love these gals. 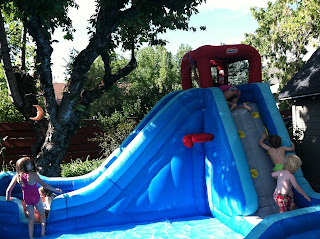 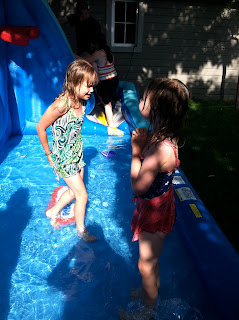 We had amazing BBQ, and homemade carrot cake. 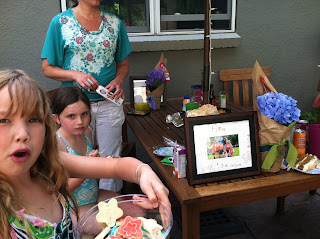 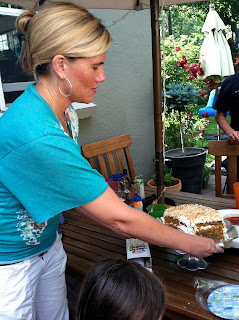 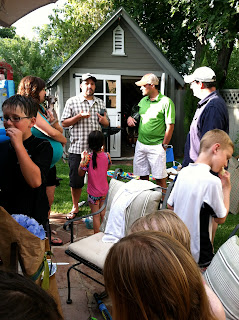 The kids played and played in the sun. 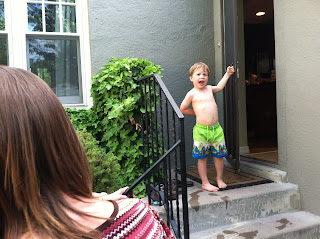 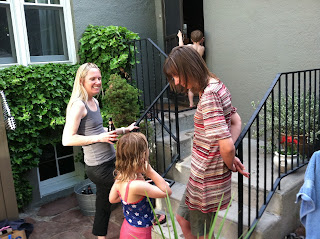 This past month or so I did something that I have never done before...I unfriended someone on facebook.  A year ago I never would have thought to do that because my mindset was that even if I had nothing in common with a friend, even if that friend made me feel like dirt, they were still my friend...and you never know!  What if I was in an earthquake some day and I needed that friends help?  What if I had kidney failure and that friend is my only match for a donor?  Forget about the fact that I didn't really want to hang out with friends like this, it just made me feel safe knowing they were there, like the back-up, back-up parachute.

But then a "friend" said some really hurtful stuff, and said it in a way that was so passive aggressive and so offensive that my alarm bells started going off in my head.  Maybe they had been going off all along, but I could now finally hear them.  And suddenly I was past overlooking the negative because "people can change" or "it's nice to be friends with people from all walks of life" or "you never know what the future holds".  Nope, I was done.  And as scary as that was, it ended up being so liberating.  I was freed from pretending that this person was my friend, and I was able to open myself up to some new authentic friendships.

So yeah,  I'm not over my fear of losing friends just yet, but I do think that I am finally seeing the beauty in the whole quality verses quantity thing and if I have even just a few loyal good apples, then I am content.

Email ThisBlogThis!Share to TwitterShare to FacebookShare to Pinterest
Labels: Ashley at the U, friendship, lesson learned