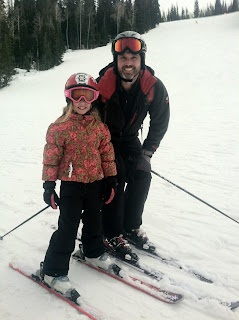 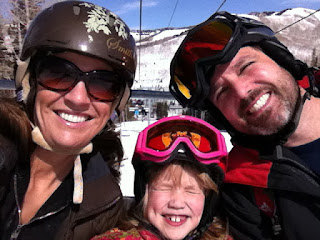 Gavin's sister Karen and her family came to visit and ski again this year.  My kids were so excited to see their cousins.  Especially Shelby, since her and her cousin Ellison are practically cut from the same cloth. 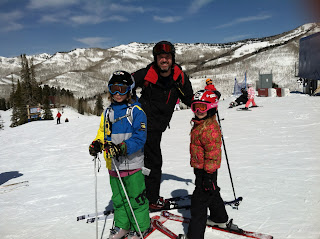 We went skiing as a family the day before they arrived.  It was the first time that Shelby and I had been skiing all season, as the snow hasn't been as heavy this year and it just hadn't worked out with sniffles and Garrett this winter. 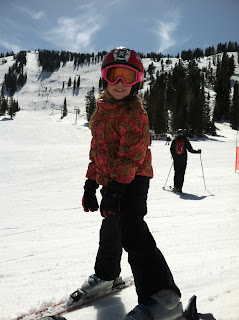 Shelby was an old pro.  She was as quick and in control as ever. 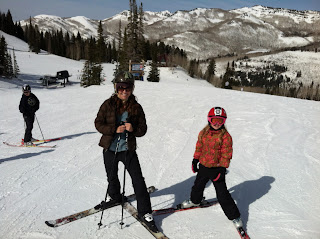 To be honest, we are at about the same level when it comes to skiing...which I am totally fine with. :) 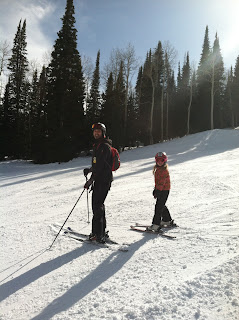 Dalton was beat as he had been skiing the day before with his ski school program.  That is one of the perks of living in Utah- they pick up the kids after lunch on Fridays from their schools, and take them up to the resorts, where they get to ski and snowboard with their friends and instructors.  This kid has had plenty of skiing this season. 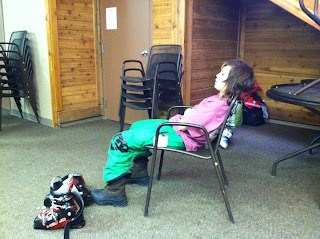 Once the cousins got in to town, we went to their condo up at Solitude.  The kids got to swim in the pool and hot tub outdoors.  So fun.  It was nice for Karen and I to get to visit upstairs in the condo while the dads were in charge of the kids.  She and I have very different views on some issues, but it is wonderful to be able to converse and try to see things from the other's perspective.  She is the best! 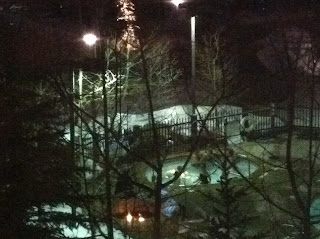 Maybe even more fun was the bath for Ellison and Shelby afterwards.  These two little mermaids are so sweet.  The condo tub had jets, so they turned their bath in to a giant bubble factory.  After the had to shower all those sticky bubbles off, that they had fashioned in to bubble underwear. 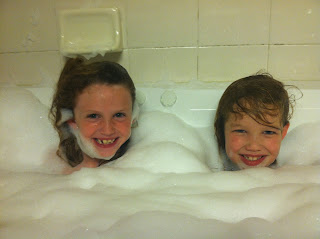 One night Ellison got to sleep over at our house.  Our cat snuggled up to our house guest during the night. 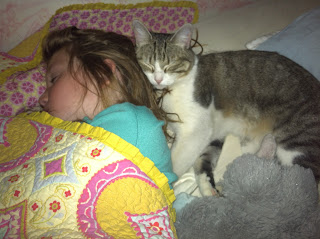 Shelby and Ellison got to ski together.  I really love that Shelby has this relationship with her cousin.  I had this with my darling cousin Sarah.  She was my best friend.  There is something so special about the friendship of a good cousin.  You love them like a sibling, but you treat them as kind as you do your best friend. 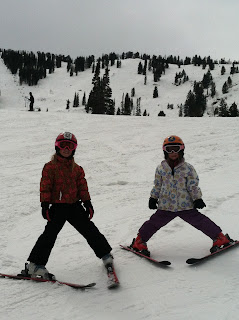 This is on our last day of skiing, after some yummy burgers and hot chocolate. 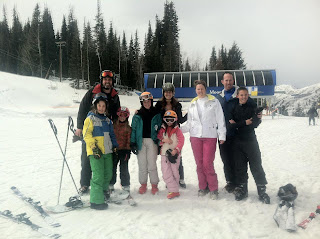 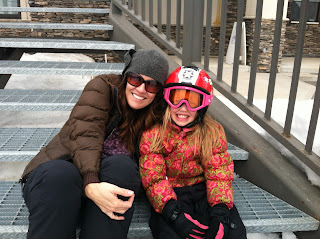 I left Gavin at the resort with the family while I went to meet my good friend, Heidi, so that we could go rally against the passage of an anti-education legislative bill up at Capitol Hill.  Here we are making our signs. 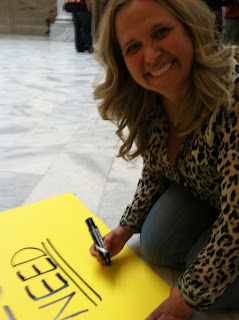 This was one of the creative signs that people had made for the rally.  To be honest, I had only been to one rally in my life.  And amazingly, it was the anti-gay marriage rally in Boston, years ago when I lived there and Mitt Romney was my Governor.  Back then I felt very differently about social issues and civil rights.  I felt I had a right to tell people what they could do with their bodies, and who they could marry. 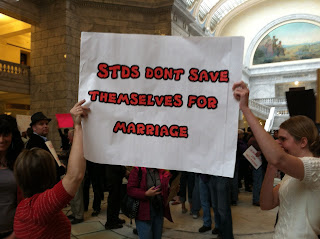 There were DARLING families up on Capitol Hill.  I loved the idea of bringing your kids, to show them what the government was all about, and how to affect change. 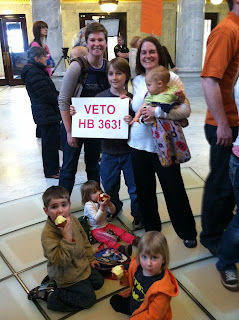 The place was packed.  It was so loud you could hardly hear the speakers.  But every once in a while, a chant would break out about vetoing the bill, which is what we were asking the Governor to do. 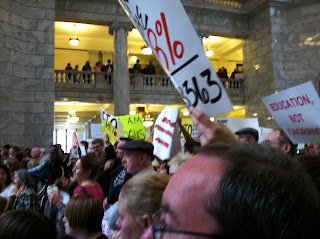 Long story short, it gave the legislature the right to tell local school districts how they could teach their sex education.  It was ridiculous, and the effort was led by Gayle Ruzicka who is the staunch conservative Eagle Forum lobbyist and Margaret Dayton, the ultra conservative Provo legislator. 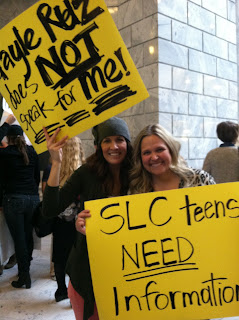 Up until this point, 97% of parents across the state had signed up their kids for sex education.  Which in my mind is proof that it was working.  I don't know any other program that gets those kind of repeat numbers.  But these doomsday women were convinced that by giving our children knowledge, it was somehow going to turn them in to pimps and hos.  Cause, you know, as soon as you learn about alcoholism, the first thing you do is run out and get drunk. 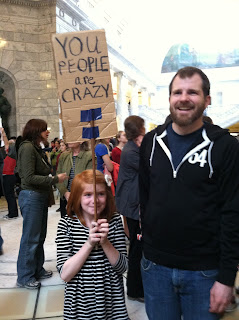 A cute high schooler, who has babysat for me, and her friend were there, demanding education.  Thankfully our pleas did not fall on deaf ears.  There was not one republican legislator present, but the republican Governor did veto the bill. 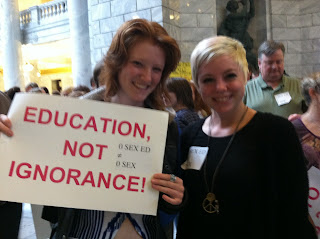 Some say it was a political move on his part.  I say, I don't care.  It is absolutely hypocritical that these "small government" legislators are so high and mighty in their moral superiority, that they think that telling every school district what they can and can not teach is somehow "small government"?  Go figure. 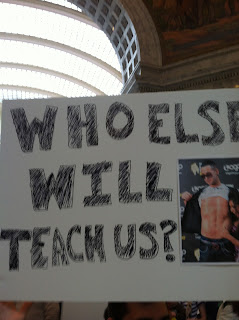 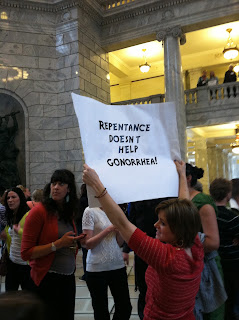 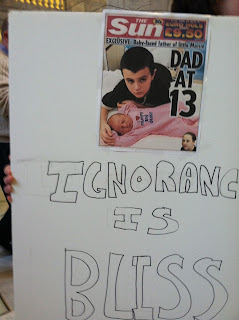 It was time well spent.  Only an hour.  But I connected to people young and old.  In fact, that was the most fun- the old people.  I had one old guy come up to me.  I thought he was going to tell me that I was wrong.  But instead, he told me that he had 21 grandchildren, and all of them needed to be educated.  Way to go Grandpa! 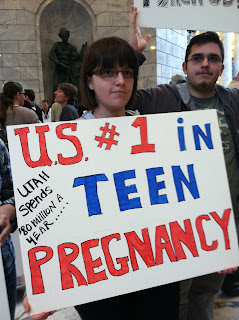 Shelby spent the night up at Solitude with her cousins.  Dalton came home with Gavin and Dalton.  We all slept well.  It had been a fun week with the family.  Lots of sunshine, good skiing, fun company, Gavin getting to ditch work, exercise, beautiful scenery...what more could you ask for? 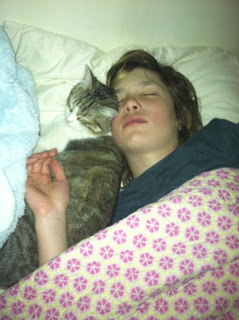