These are some random pictures from this past President's Day weekend (that our freako legislators have renamed Washington and Lincoln Day so as not to confuse people to the fact that they TOTALLY 100% HATE OBAMA, just incase we were unsure). 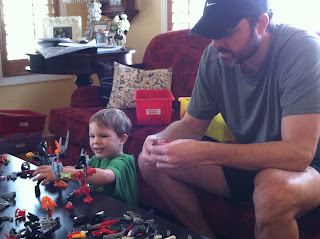 Shelby and I took her allowance and went to Toy's R Us to buy her some Squinkies (small plastic animals), and Zinkies (Squinkies tinier and even easier-to-loose cousins). 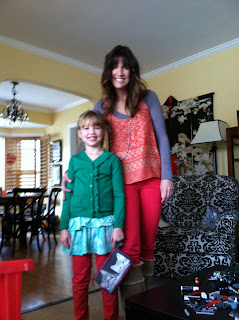 We met my cousin (smart, beautiful and cool) Stephanie and her daughters at the Children's museum 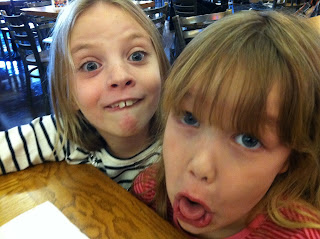 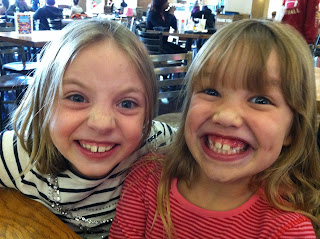 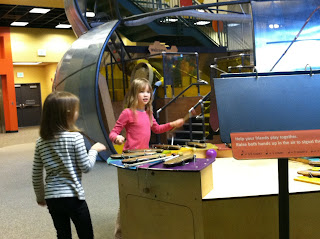 and then there was today:
I usually don't lie.  But today I was up a creek.  I was planning to take the kids, all three of them, to the Natural History Museum.  Dalton had the day off school at SLARTS, for some weird reason, so I let Shelby stay home, and Garrett doesn't have school on Tuesdays.  I had to shower because my hair was starting to look and feel like a brillo pad.  And getting my "face on" as my Grandma likes to call it, took a little longer than normal.  Long story short, I am done, I call Shelby in to the bathroom so that I can run a brush through her hair before we go and she asks me what the small blue thing ("massager") with rhinestones on it is for that is sitting on the side of the sink.
Hmmm......(thinking fast while trying to look casual),  "WHY did Gavin leave it there?!" is the first thought that goes through my head but I respond:
(me)"It's to clean your ears"
(Shelby)"It is?"
(me)"Yes." (said in a high pitched squeak.  I am sweating at this point.)
(Shelby) "Whose is it?" (as she picks it up and examines the multi-colored rhinestones)
(me)"It's Dad's. ...But it's only for adults...who have big ears....AND if a kid used it- they'd... GO DEAF!"  I almost threw in "blind" too, but Shelby can spot exaggeration a mile away.  I picked it up and put it on the top of the medicine cabinet's shelf.  "Yep, just for Dad."
I have never done Shelby's hair so quickly.
At the Natural History Museum, I was in awe, as I always am when I am there.  So were my kids.  I don't think that there is a building in Utah that is more beautiful.  The way that they nestled it in to the earth, with all of that horizontal copper...ahhh, gorgeous.  The word that sums it up best is "thoughtful"... 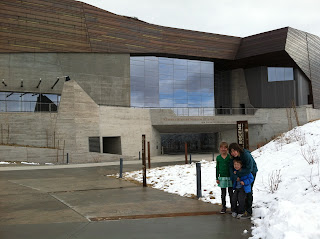 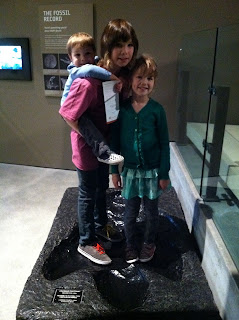 From all the materials they used... from every display and artifact... 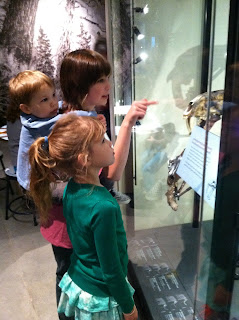 to every quote placed on the walls... 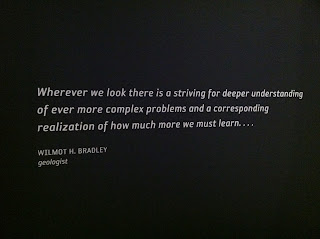 to the way that the building flows- all so thoughtful. 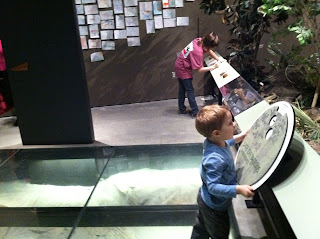 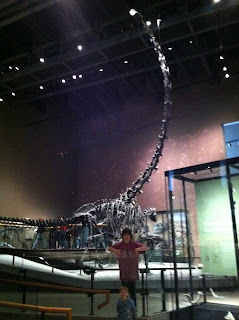 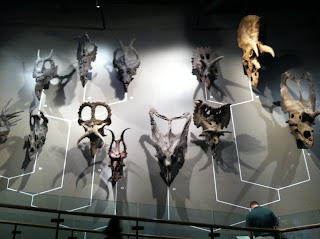 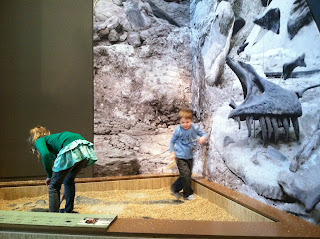 A Mom whom I know from Shelby's school was there as a volunteer, and made the water display, with it's demonstration on how Lake Bonneville became the Great Salt Lake, even more interesting than it was. 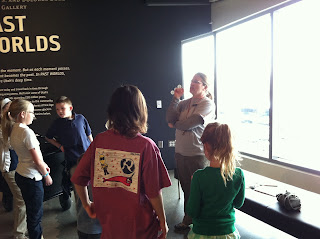 As an aside, Dalton was hesitant about going because he told me that the last time he was there one of the volunteers had mistaken him for a girl.  I told him that I guess that's what you get when you grow your hair down to your shoulders, get blonde tips, and wear skin tight purple jeans.  You gotta be willing to take the good with the bad if you're going to be a trend setter. ;) 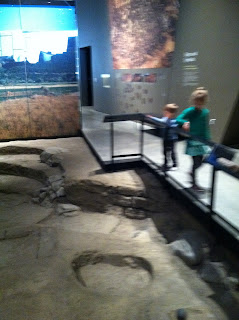 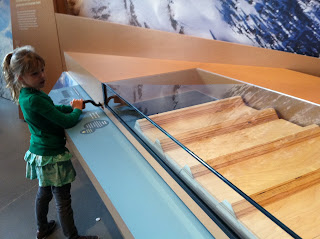 After lunch Shelby and I took two of our three cats to the Vet because they have these nappy fur clumps that I can not brush out (not that I have tried, but I am just assuming, as they gross me out just looking at them).  Oh my gawsh, seriously, WHEN WILL I LEARN?!  That Vet screws me over so bad every time I go.  Maybe it's just me.  Maybe it's because I grew up thinking that animals like cats were just lucky to be alive, and not living in a 2x2 cage.  But seriously, $200 by the time we're done for two cats to get de-nappified?  One of them had to be sedated because he wouldn't let them clean the lumps out of his fur.  Here's what I am thinking: if I could wrestle those two big cats to get them in to the cat carrier, I bet that your staff of four could get that cat to sit still for the one minute that you need to shave those damn things out of his fur without needing to admit him and put him under.  ARGH.
Shelby was in heaven...although one of the Vets told her this really awful story about how a Malamute (her favorite dog breed) had eaten one of the family's cats, so that was kind of a bummer. 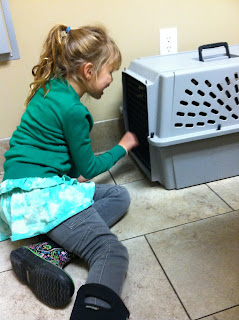 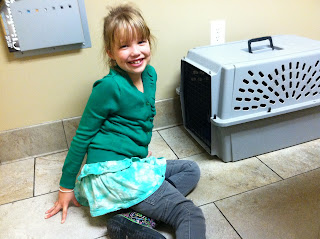 Now the big kids are at Spanish and Garrett is looking at me like I need to entertain him.  I am tired slash overwhelmed (by emails and my list of things-to-do) slash bored and wanting to snack on something gooey/flaky/warm/sticky/sweet and fattening.  Here's to surviving the rest of a glorious February day.
...just called Les Madelines and they are OUT of kouign-amann... so I ate two spoonfulls of Trader Joe's Cookie Butter (lest you be fooled by the sound, there is not an ounce of nut or nutrition in this butter, but rather a blend of mashed up cinnamon cookies that makes you weak at knees) and a bowl of honey greek yogurt.  Next time I'll plan for my sugar crash earlier so I have the pastries that I dream of...