I am sitting across from Dalton, staring at him while he sleeps...or tries to sleep.  He caught a bug in Mexico.  At first we thought that maybe it was the greasy piece of pizza he got from the Sabaro's pizza joint at the Puerto Vallarta airport, but unfortunately Garrett started throwing up a few hours later, so a bug it is.

Poor kid.  Both of them.  They are so weak and sick and perfectly well behaved.  They are like the sweetest sick kids you've ever seen.  Especially Dalton.  He was in the airplane bathroom for half the flight throwing up.  As if that little closet isn't horrible enough without the stomach bug.  And he never complained.  He was throwing up in barf bags the entire time we were leaving the plane, going through customs, and getting our luggage.  Again, no complaints.  He would just hand Gavin or I the filled barf bag when he needed to swap out for a new one.

It is KILLING me.  He has tried to keep some poweraid or water down, but every drop comes right back up.  The retching is the worst.  When there is nothing there but the body keeps trying.  Even after his tan he still looks pale in the face after having been at this for hours on end.  He's on the couch now.  I can tell that his stomach is still hurting him as he is moaning in his sleep.  Seriously, the feeling of being powerless to help your child is every mother's definition of hell on earth.

I am rubbing and patting and hugging and replacing pillows.  I am wiping mouths, and giving sips of water.  But it is not making him better.  I decided to call in the big guns.  I am going to have my Mom come over in the morning.  She is so fierce when it comes to her grandkids getting sick, that even if they don't get better any faster, the kids feel like they are with someone who is going to will them to get better, and spoil the living daylights out of them in the process.

Garrett is a jewel.  In bed with his Dad, who seems to be fighting a cough that he has just picked up in his travels, he wakes up to throw up and then nestles back in next to Gavin.  Our sweet little cat Lulu, is like a rescue dog for these sick kids.  She goes around from child to child, sensing who needs her most, and loving on them, until their spirits are lifted and she can help one of the other kids.

She laid right next to Dalton's head until he was almost asleep.  Then when Garrett started vomiting she walked over to him and allowed him to lay his head on her body and use her like a pillow pet.  After he was asleep she went and curled up next to Shelby, where she usually resides, spooning her BFF human.

As soon as Garrett was up sick again, Lulu was in bed nestled up between Garrett and Gavin.  It's almost like it's worth being sick in Garrett's mind if he gets the rescue pet as a real stuffed animal.  Shelby is just as frustrated as I am.  Though she hasn't learned the art of hiding her anxiety like I have.  She is on the verge of tears watching her brothers endure their sickness.  And she is mad as a hornet at the invisible bug that is causing their distress.  To not have a face to assign to their misery is hard for her.  I give her projects to do to feel useful, as I know this is helpful for me.  She goes to fetch Dalton's pillow, or get Garrett's water bottle.  Whatever we can do to try to feel like we are of some use.

Gavin, the best dad on the planet, was able to unpack most of our stuff before he went to bed...and he went to the store to stock up on more poweraid.  Unfortunately he forgot to get new milk, which we are out of, which I am sad about because I would like to have a bowl of comfort food, aka: cereal, to help me feel better about my sick kids right now.

In other groans and complaints after the manner of Alexander and The Terrible Horrible No Good Very Bad Day: I lost my new iphone in Mexico somewhere.  And I don't think I have insurance.  And I have a lot of chin whiskers right now.  And I have developed pregnancy mask on my forehead, which is ironic since I am not pregnant and never got it when I was pregnant.  And I forgot to call any of our family members today to wish them a Merry Christmas.   But life is still good. 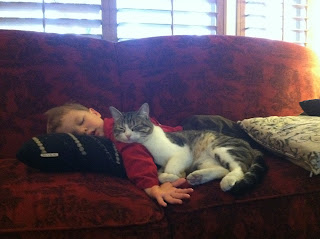 Lulu and Garrett cuddled up together while he sleeps. 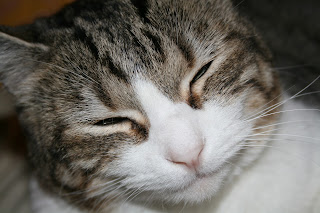 Here's to hoping that tomorrow is a better day and that the girls don't take their turn with the stomach bug.