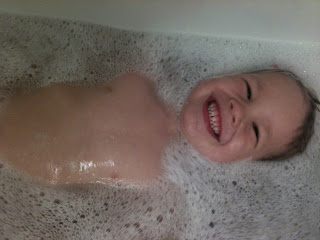 To make up for the lack of sleep we got with two days of howling wind and rattling single pane windows, we all decided to sleep in today.  Was it a school day?...who cares?  Dalton, who equates napping with his cat litter chores, took a three hour nap.  Shelby was cuddled on the couch with Garrett playing the IPad.  Oh, as a side note.  The whole I'm A Mormon campaign is big right now, and I just have to say that the reason that I believe in God is because there are IPads on the earth today.  That right there is a true manifestation of God's love for his people, and his knowledge that sometimes you just need two hours of peace and that's what that little tablet is: peace and low level radiation.  It's a miracle.

Anyways.  So, kids were sleepy today.  I got an assignment done.  My Mother stopped by.  She is semi-frantic about the fact that my family will be in Mexico this year for Christmas.  Cause what's Christmas without thirteen tons of presents per child?  I mean, how would the baby Jesus have known that the wise old men loved him if they wouldn't have brought him some fancy gifts?  Hello, it's in the Bible- gifts=Christianity.  So, I am kind of stressing because she is having them make lists.  LISTS of presents.  And I'm over here, saying, "one...one present please".  And she does this thing where she rolls her eyes and talks in super high pitched voice really slowly and says, "Oh kayyy, what-Ever ewe saaay Ahhshley. (wink).  SHHHuuure I'll just get the keeeeds WUUUN present."  My heart kind of sinks because this is exactly the flippin' reason that we are escaping for the holidays...to avoid the present hoopla.  And now my kids will still get it.  Oh, thank goodness, Christmas is saved.  They were going to have to go on some crappy vacation to a sunny resort with all the food and treats they could eat, swim with sea creatures, zip line through jungles, swim in pools, and stay up late.  Oh the torture.  But now...yes now they will have a proper Christmas filled with STUFF that I am sure they will remember forever.

Gavin was getting annoyed.  Where in I am trying to pacify him, even though I am equally annoyed.  And Dalton, who is oblivious, was foaming at the mouth, getting extra sheets of paper, with his laptop in front of him so he could make sure to write down the correct SKU numbers of all the stuff he was in desperate need of.  New lacrosse sticks because he only has three.  Possibly a new acoustic guitar to jam on since he only has three of them at his school to play on.  Hey, what about a Kindle Fire because his Kindle is looking a little dated.  I mean, it doesn't even play video games, and what good is ANYTHING if it doesn't have the capability to play video games?  Toaster?...must have the ability to multi-task and play mind-craft while we are waiting for toast to pop up.  Shower head?...must double as a Just Dance controller.  So, Dalton was feeling pretty good.  His Christmas was going to be saved after all.

Shelby on the other hand, could sense what Gavin and I were feeling and thinking.  And so she did what any rational thirty year old her age would do, and told us all that she didn't need any presents.  "Nope Grandma, there is nothing I want."  My Mom obviously saw this as what it was- a true sign of Stockholm's Syndrome.  And since she couldn't kidnap Shelby and deprogram her right there, she told Shelby she'd just take her to the toy store later, where she could decide.  Shelby managed a half hearted smile but still insisted she didn't want anything.

Later on, Shelby admitted to me, after some wild dancing in our front room, that "this Christmas sucks."  Actually I was the one who had to say it.  "You're feeling sad and mad because this Christmas sucks because it's not like our other Christmases, and it's weird that we are going to Mexico, and you don't want to, and you just want it to be a normal Christmas."  It was like I had opened her head up and read her mind.  She nodded in affirmation, relieved that I finally had come to my senses and felt the same way about the situation that she did.  She may not believe in Santa anymore.  She may find a lot of the traditions sappy and superstitious.  But by gosh, what were we, savages??  Barbarians??  No tree?  No lights?  How does the earth even continue to spin on it's axis without those things?

I told her that this was an experiment, and if it didn't work, then we'd know for the future.  Yes, she said, but then we'd have to wait like 1,000 days for a do-over.  True.  So, to be honest, it's not that she even gives a crap about the gifts.  She wants the tradition.  The ten tupperware bins on the top shelf of the garage.  The kitch.  The goo.  She wants nativity sets, and advent calendars, and tree skirts, and homemade ornaments.  She wants nostalgia.  The good ol times when she was six years old.  FINE.  Gavin is going to kill me.  This is what spending a fortune on this trip was supposed to buy him- a get-out-of-Christmas-decor-jail-free-card for this year.

Then she proceeded to tell me that our house sucks.  And that we were never getting a puppy.  I was basically thinking that this entire conversation could be the newest book in our favorite series of Alexander and the Terrible, Horrible, No Good, Very Bad, Day books.  What I have learned is that if I agree with her, she feels like I have confirmed her feelings, and she is more likely to get over it.  Which she immediately did when I agreed with her.  Yes, I nodded with great heaviness and solemnity, everything that she thinks sucks, does indeed suck.  Then Dad brought in a chocolate bar that had bits of waffle in it. YUM.  So then we needed to get a drink of milk.  And after we got our drink of milk we were ready for bed.

Garrett was enthusiastic about having a sleep over tonight in Shelby's room, which we agreed to.  He jumped in her second bed and was waiting for something "fun" to happen.  Lights out and separate beds were not exactly what he was envisioning.  He tried to wake Shelby up several times after she fell asleep snoring in .3 seconds.  We talked about the wind, and seeing Puss In Boots tomorrow.  He was ready to give in to sleep by this point.  He seems to be getting big.  Mimicking everything the big kids do.  Talking so well.  His d's for th's are his last little toddler speech delay that I have to hold on to.  "Mom, Dalton won't give me dat ding."  Oh really, Dalton won't give you that thing?  Can you tell me that one more time while I pinch your  legs and suck on your cheek, as I smell your breath, and watch your face one inch from mine?  You want to wrestle?  You want to play battle?  I get to hold you, and snuggle, I mean destroy you?  OK, you've got a deal.