This spring break was fun(ish).  Funner if you were one of the kids.  They got to go down to their grandparent's horse property where they sloshed around in their new galoshes in the mud, poked the half-eaten deer corpse that a cougar had killed, and went for other adventures where the soggy weather only made the adventures that much more fun.  Dalton and Shelby were especially happy because their baby brother got left behind at home. 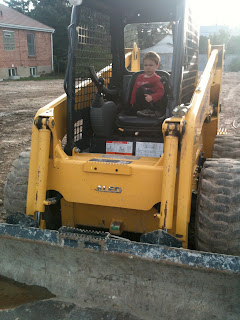 We took walks to the corner market that is under construction, where Garrett tried out the seat on a bobcat.  He was maddish that I was taking this picture because the event was sacred and I shouldn't be taking pictures of such a holy occurrence. 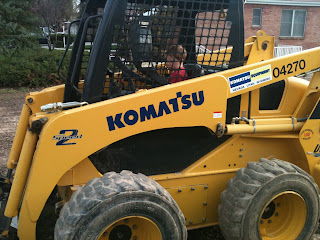 When the big kids came home from their adventure, they joined Garrett in itouch mornings where every child gathers on the couch and rots their brains away on a techy gadget that buys mom two minutes of peace and quiet so that she can eat her cereal. 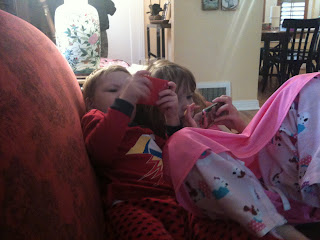 One surprise was that Gavin's mom, Martha flew in to town.  She was going to the super special Karl Bloch exhibit, and she stayed with us for a couple days before the big event.  Shelby and I took her to the Grand America where we had a fancy traditional English tea service.  We were slightly less fancy than we should have been because we were out of practice.  I spilled a champagne flute all over the table, and Martha sent a piece of cheese flying across the room.  Shelby was the fanciest of all of us...probably because she had on the fanciest clothes, and that can be helpful. 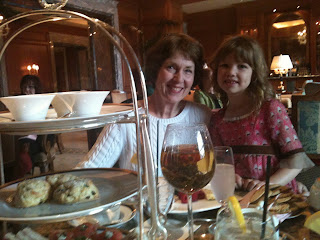 After tea, we went to our local library where the "Aurthur" creator, Mark Brown, was talking and signing his new book.  It was fun.  He showed a slide show about his experiences as a cartoon illustrator and then the kids got to meet him and have him sign their Arthur books.  Shelby was forced to stand in this picture because she thought that it was a lame idea.  She did a good job faking that she gave a darn. 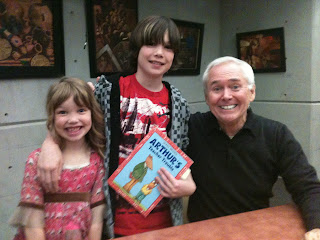 Here's Grandma Martha with Garrett, whom he lovingly referred to as "that Lady", or "dad's Lady".  I told her that it was his other grandma, but that didn't quite make sense to him.  She read a poem of her Grandmother's, to the kids.  It was about an Easter lily flower and a butterfly.  This is the same poet who wrote the LDS poem and hymn "I have two little hands".  We bought an Easter lily plant after Martha left and the kids thought that was cool. 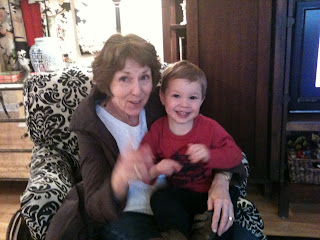 Unfortunately, she didn't get to stay quite as long as she'd hoped and Gavin didn't get to go to the exhibit because he got sick with a head cold...which he later lovingly passed on to Dalton, Garrett and I. 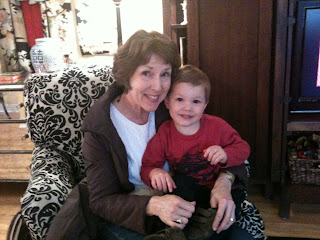 At some point during the spring break I had gotten my hair colored.  I tried to capture the horror in this picture, but it doesn't do it justice.  It turned out blue.  I think that when I said "ash" he thought I said ashen, as in dead.  He fixed it...kind of.  Now I am kind of orangy...but at least not looking like I am 95 years old. 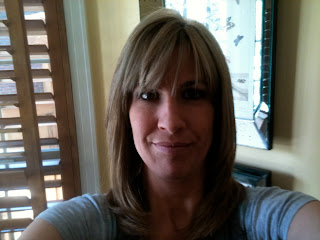 One day we took the kids to the aquarium.  It may have been Shelby's favorite experience of her life, to date.  Petting the rays was awesome! 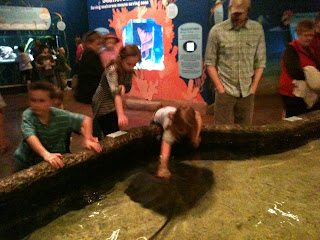 You wouldn't believe that I had to force her to to pet the rays.  Seriously, I had to threaten her with a spanking...which of course I would not have followed through with.  But she felt overwhelmed by the rays..scared.  So she needed a threat to force her to do what I knew she wanted to do, and what she then continued to do, even when everyone else was ready to move on. 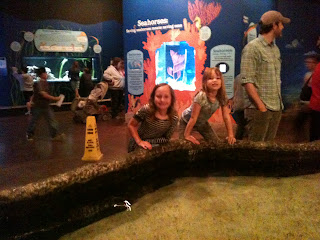 At the end of the day she said that it was her favorite part, which I knew it would be.  She was going around to the other kids and teaching them how to pet the sting ray (just use two fingers) and telling them that they could touch the tail..that it would not sting them.  Garrett had a pretty good time too.  He would have liked to have jumped right in with the rays. 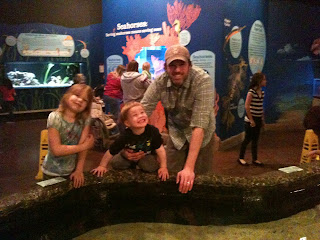 I had made up a scavenger hunt for the kids.  Shelby got to bring her best friend along.  They checked off all the animals they saw on the list, and made a list of all the creatures that used camouflage.  I in turn let them eat lunch at the cafe and let them pick out a $5 toy in the gift store.  Shelby and Hanna picked mood-necklaces..hello blast from the past.  Hanna told Shelby to hurry and feel sad so that her necklace would turn blue. :) 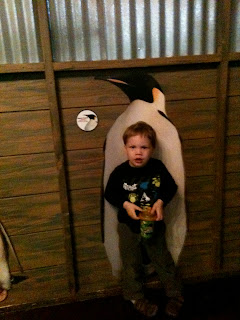 Here they got to see an electric eel and feel what it's like to get shocked by one...cool! 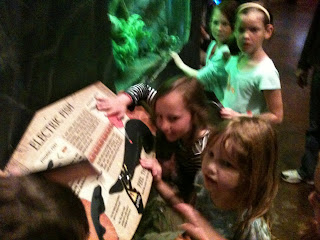 Dalton and Hanna in front of the penguin exhibit. 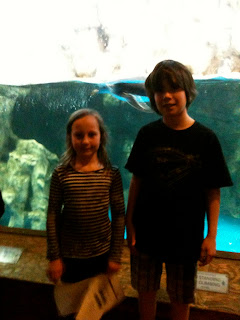 We took Grandma Martha to our favorite local bookstore, King's English, where she bought the kids each a book.  We got take out from Sea Salt- our favorite local restaurant.  We had duck pasta, eggplant gnocchi, and peimonte wild mushroom pizza...yum!  The kids all had sleepovers with their friends, played A LOT, and had a fantastic Easter.  I'll post pictures and video of that.  A good spring break for the kiddos.  It would have been better for all of us if it would have been a little sunnier.  Next year I think we'll head to Mexico.  I need some vitamin D.

Love the pics of Garrett in the bobcat, it's it amazing how having boys suddenly makes you acutely aware of all passing trains, planes, and construction equipment. We're heading down to UT for our annual summer visit so I'd love to meet up again if you're free. We'll be down for the last two weeks of May so I'll shoot you an e-mail when we arrive.