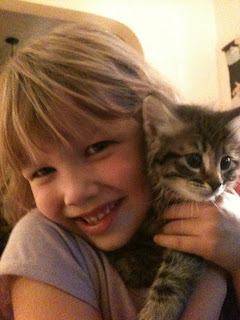 Ugh...why did I temp fate?  When I put out the mojo vibes to the Universe that I wanted less pets in my house, I had two specific pets that I wanted MIA ASAP.  One was our grumpy fat old cat Amigo, and the other was our been-there-done-that-we're-sick-of-you-after-five-years-why-don't-you-just-go-ahead-and-die-already-gecko.  The universe did me good on one of those, as one of Dalton's friends is taking the gecko off our hands...hopefully TODAY.  But the lines of communication must have gotten crossed on the second request, because instead of our mean old cat leaving us, it was our little new kitten.

I can not pretend that Gavin gives a hoot, in any way shape or form.  To him, one less furry thing that requires attention, is a good thing.  But, when we were about to go to bed last night, and it was freezing cold, and snowing, I did remind him that his daughter's heart will be BROKEN when she finds out that her kitten is gone.   That's when he got up, went to the back door, opened it, and whistled for five minutes for that little ball of puff.  I wanted to tell him that at 11:00 PM it wasn't the most neighborly thing to whistle at the top of his lungs, when the lights are off in every one's homes...meaning their asleep.  But, I knew that he was finally seeing that this wasn't a good situation after all, and was doing all that he knew to try to call the kitten home.

Gavin said, "I bet some neighbor took it in".  Murphy's law, the kitten's dang collar and tag got lost the day before, so no one would even know where to return it.  "That's great news if that's the truth, for the kitten" I said, "but to your daughter, she's still going to be out a kitten and be just as sad."

Shoot...we had an appointment to get it fixed in two days.  He (we called it a "she"...poor mixed gender-identity cat...who obviously could give a crud, but needed to be called a "she" so she would be liked by her six year old owner who thinks that boys are gross) was just getting to where I liked him.  He was super friendly...that was the case from day one.  But now he was more calm...not so spazy.  Sure, he was still trying to mount our other cat...and that was a hard one to explain to Shelby...but that would have been taken care of in just a few days.  OHMYGOSH...this sucks.

So what?...now I have to make up stinkin posters...walk door to door, asking if anyone has seen our cat?  It's flippin' freezing outside.  Which is what really makes it so awful- because if he hasn't been taken in by someone he is a little feline Popsicle by now.  There is no way that he can survive at night with how cold it gets.  So what, spring will come and we'll find his frozen little...ok...not going there.

GUILT...GUILT...I should not have let him outside without tags...he just always came right back before...but I should have known better...he'd follow the mailman all the way down the street...and there is that mean Siamese that lives down the road...and teenagers are idiots...and cars drive fast... :( 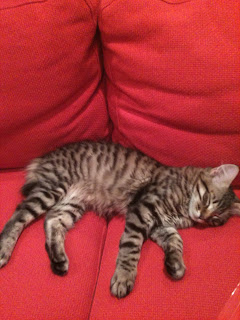 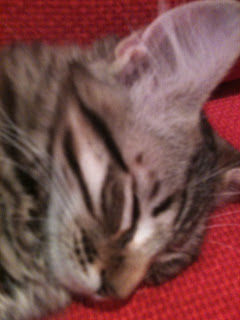 I am sad about it.  I am sad for Shelby...who is going to be SOOO SAD.

** Couple hours later I opened my car door to find a cold and hungry cat.  She must have snuck in yesterday when we were unloading the skis.  Car was stinky :(  but the cat was safe...thank goodness.  A good car wash and a lot of cat hugs later, a little mother-guilt could be brushed off my shoulders...phew!

oh no you guys gotta get that cat back! for the shelbs. she is such an animal enthusist, that big heart of hers. hopefully he'll come home where he belongs.

did you get a new couch? liking that persimmon colored one that the cat is lying on...

Hey Karen, thank goodness we found him...I mean her. ;) That couch is from Ikea, and it's downstairs in the kid-toy-land. Just gave away the gecko tonight (No givebacks!). :( But seriously, one less mouth to feed in this house feels great.