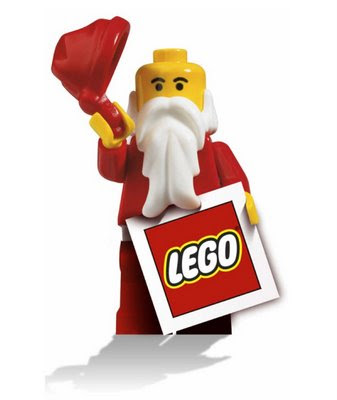 Yesterday I am at Toys R Us with Dalton. He's home sick from school with what we think is paraflu, so he has a mask on, as to not infect anyone else. It's funny, because he was concerned with getting others sick, so he was happy to wear the mask. Me, as the mother, on the other hand, am more concerned with the looks that I will get from the other parents when they see my kid who looks like I just kidnapped him from the ICU, with that hospital mask on his face. I kept saying, "You can take off the mask and just cough in your sweatshirt". But he wanted the mask. Sweet thing.

So, he sees this wall of LEGO's. The Christmas inventory has just been put out, and there is a plethora of Star Wars LEGO's. He shows me every one that he wants. He asks how much Santa will spend, how much I will spend, how much Grandma will spend...trying to tally up how many of these beyond-cool LEGO's he can get for Christmas. Here's where I struggle (one of the many places). In my heart I WORRY that my kids will be spoiled. They get so many gifts from their Grandma, that I am always playing Bad Cop to her Good Cop. Why I feel that kids should only get gifts when they have earned them...and for Christmas and birthdays just get a few presents I don't know. I truly worry about my kids becoming that spoiled brat from Willy Wanka- you know...Veruca Salt. Who wants a kid that's going to go down the bad egg chute?

So, it's a constant tug-of-war. Me chastising my Mother when she brings over a $100 LEGO set, for no good reason other than she had nothing better to do with her time than shop, and this is her only grandson that she can buy for, and whose affection she is desperately clinging to hold on to. Or me chastising my husband when he comes home from a week in Boston, with some kitchy thing from the airport gift store, to appease the guilt that he feels from being gone, and to buy their love and forgiveness for being gone when he can't help it.

And then there's me...the mean mom. I would love to buy my kids gifts. I really would. But I can't...because of my mother and my husband. So, instead, I try to tally in my head what constitutes an appropriate amount of gifts, and what constitutes going overboard. It doesn't help that we have neighbors whose kids get a glutenous amount of toys for Christmas...or the fact that there are three of them, all one year apart. So, Dalton looks at their load for three kids, and compares it to his load for one. Christmas afternoon can be pretty anti climatic around here. Of course my mother hears about this, and will have none of it. How dare someone make her grandson feel less than! So, in she goes to her secret stash of gifts, and like a second Santa, brings out a whole new load of gifts.

What is it with overcompensating around here? So there we are at the toy store, and I am having a mini panic attack, trying to quickly sum up what we are going to try to accomplish this Christmas. Gavin and I have not talked about this. We always have grand plans, and then fold under the pressure of our kids hating us, and not wanting Grandma to outdo us. Every year, we say "This year it'll be different. We'll do one big gift. We'll go on a trip." And year after year we are foiled.

I call Gavin. All this stuff is here. No last minute trips on Bangater, out to the West Valley Toys R Us, a week before Christmas, to try to acquire the "it" gift that every kid must have. I could do it all right there. Be done. I couldn't believe I was being so on the ball. Gavin said to go ahead. So, at the cash register I told Dalton to go put a board game back on a shelf, and I had the clerk ring up all the gifts on his list. The she bagged them and I told her I'd be back later to get them. So proud of myself. Gifts purchased. Dalton was in the dark. And I could cross one kid off my list when it came to Christmas-panic-buying.

Did I mention that Dalton asked me, at the toy store, "Are you and Dad Santa?" and I lied. It doesn't feel too Christian to lie when your kid asks you point blank about a magical bearded man's existence. But right there, it was too much for me. I wanted to tell him. I just don't want to be the one who "ruins Christmas" for him. I don't want to be the Santa-killer. Can't I assign my mother to do that? She has enough good mojo with the kids. Her persona can withstand a bit of a bruising. Not mine. Lord knows I need all the help I can get.

So, last night I asked Gavin to hide the gifts downstairs. We have a secret place. He said that it would wake the baby. He'd do it in the morning. And he forgot. So, I am running Shelby to school this morning, and I come back to see Dalton playing on our computer in our room, right next to all the gifts, AND right next to Gavin. I give him a look like "What the Hell?" And he says "He already saw them all". Dalton looks at me. And again, wanting to have an un-ruined Christmas, I say "Grandma must have brought those by yesterday." And then I internally flip. I think, by gosh...Christmas is ruined. All of my plans and my looser husband just ruined Christmas for my son, which in turn ruined it for me. Good job Ebeneezer. I hope you die in a fiery death. Well, it hadn't gone that far yet. I asked Gavin to come in to the baby's room where I was changing him. And this is where the shit hit the fan.

Whenever Gavin feels the slightest pains of guilt...knows that he's screwed up, he puts up the defense shield and...DEFLECTS!!! It can't be his fault because someone else must have done it..or made him do it..or helped him do it. It just can not have been his fault...EVER. Yes, can't we just say that the invisible forces of nature just caused something bad to happen through no one's fault? Yes, because when someone kills a pedestrian with their car, why can't it just be the car's fault?


I am almost to the point of insanity. And then I blow. I shove the baby on him and march in to the room and grab the gift bags. Shelby is at school and Dalton is back in his room downstairs. I ask him through tears, "Don't you see that you are going to make me insane?" To which he replies, "You already are a little insane."

Gosh...I am the Scrooge. So, I was furious with him because he screwed up, and because he was an immature pansy ass about it. But, what I was acting out over was this illusion (that I was trying to create) being dashed.

Would Christmas really be ruined if Dalton knew what he was getting? No. Would it be ruined if he knew that there was no Santa? Probably not. His day would more likely be ruined from hearing me turn in to a psychotic freak.

So, I called him upstairs and told him everything (minus Santa being a big fat lie). I told him about how I'd wanted to surprise him..how I was mad at Dad, and how I did not handle myself the way I should have. It helped a little, but I am sure that he still thought that I was kind of crappy. It was crappy of me. Shit. I hate that. Gavin does the crappy thing to begin with, and I come off being the crappy one.

Well...I can say that when I told Jackson the truth about Santa, it really changed our relationship...FOR THE BETTER. I can't really explain it, but it made him feel kind of special being "in on the secret". I still kept his presets a secret but I made a big deal about him helping out. He helped set out the younger kids presents and we had some really special moments together. I felt like it made him feel like he was the most important person in the world. Only he would be able to experience it.
As far as the whole fight with Gavin...I completely see where you are coming from. It sucks when the mom gets the raw end of the deal. Every. Single. Time. Why is it like that? We are always the bad guy? Always!

HUG. I always come out the bad guy too.Men have a way of doing that, I think it's in their DNA

Thanks Kati and Becca. After this Christmas, I think that I am going to answer honestly about Santa. I think we are both ready. And it's good to hear that it was positive for you Kati. I could see Dalton being the same way. I hope so!

And it's good to hear that I am not the only one who hates being stuck with the "mean mom" role. I mean, we can be fun too, right?!

My mom said to me, when I asked her if Santa was real, "well, what do YOU think?" I told her I thought maybe the store owners decided to give toys away once a year. Then I thought about it and must have realized that was not very plausible, and I said "I think it's you and Daddy -- isn't it?"

She and I had a long talk about Christmas and Santa and traditions and good secrets vs. bad secrets. I was about six, but I remember the whole conversation clearly -- and remember feeling somehow relieved that I'd suspected the truth and that my mom was honest with me.

BUT as an adult, I am also glad she didn't just tell me -- that she asked me what I thought, so I could clue her in as to whether or not I still needed to believe in Santa. I think my baby brother pretended to believe for years after he figured it out, mostly because he could tell how much fun the rest of us had playing Santa for him.

I admire your parenting skills, especially your ability to come back and be rational after all that. I'd want to kill my husband in that situation, and am not sure I could have behaved as rationally as you did!

I also admire that you are able to deal with your husband and your mother, who are not willing to face the fact that their need to give Dalton presents is not about Dalton, it's about their need to ensure that he loves them. Trust me, he'll remember time spent with him FAR more than he'll remember a toy.

Thanks Carolie. That really is good to hear how it worked out for you. I think that when this Christmas is over, and it comes up again with Dalton, I am going to do it just how your Mom did it.


To be honest, I did wig out after I grabbed the presents. I just didn't go into details on the blog. But thanks for the praise on dealing with my fam. It can seriously be exhausting, especially when everyone thinks they are doing it "right".

You're right...I just feel a little badly for your husband having all your dirty laundry aired publicly.