Every summer our street has a block party.
Well, every summer...except last summer (cause I had a baby and the earth stopped rotating for about a year afterwords, in case you didn't hear). So yeah, every summer we have this block party...starting the year before last. :)

And let me tell you- it is THE event of the summer that every one looks forward to! This summer we had a great band perform and we were lucky enough to know the female singer personally! She also moonlights as a babysitter. It is so cool when you are totally in with all the celebrities. 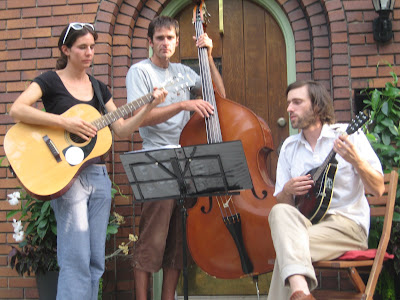 We have a great street...except for the losers that didn't come. But that's OK cause we wouldn't have wanted them anyways. The people that were there were very cool...which is why we like to hang. We closed down the street for the day. I had to get a permit, which is fine. But then the city police officer told me that I was going to have to pay $29 to close down the street. Which I thought was lame because they don't pay for the barricades. We had to get those. And they don't pay for a policeman. And they don't pay for clean up. So basically that $29 is a fee for neighbors wanting to hang out. And so I said, "Hey we are having Sunday dinner with our neighbors the next night...why don't you charge me double!" I gave the local city councilman an ear full over it. Which kind of back fired when he decided to show up and hang out with us to tell everyone how he'd waived the fee. 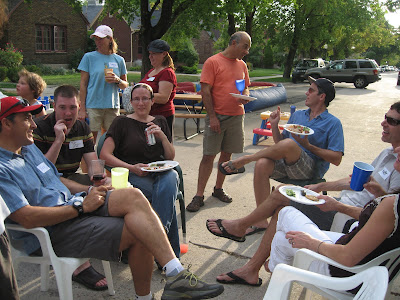 Let's see...the kids set up their ramps and jumped their bikes. We rented a bounce house and they went bananas. They walked around with their Jones sodas, feeling very grown up. They gorged on all the food that people brought. They thought it was pretty sweet. 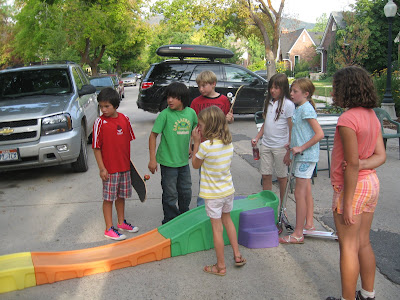 The men lined up their grills, and showed off their skills. 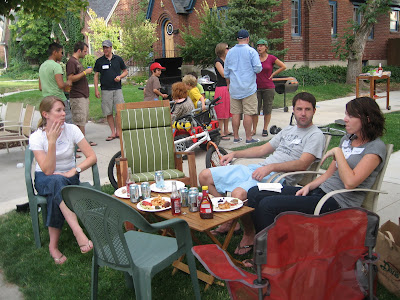 When it got dark, the band stopped and we cleaned up. Up the street we could hear another band playing. So a bunch of us walked up to check it out. Turns out it was these guys and they were rockin. One of the band members lives on that block. So then our block started talking about how next year we are going to out-rock them, and it's going to be out-of-this-world! Did I mention that I love my street?
I love my street because it is perfectly acceptable to be in your pajamas at noon. Or at least they make me feel like it is.

I love my street because everyone walks down it, and they all say hi, and we like each other.

I like my street because we don't all look like each other, or go to the same church, or come from the same place.

I like my street because it's OK if you forget to mow your lawn on Saturday, and the next.

I like my street because there are always kids hanging out on it.

I like my street because the kids can walk to school. I can walk to get the paper at the local market, a great breakfast at the local diner, homemade pizza from the local grill, a shaved ice from the little shack, some penny candies, balloons and toys at the local gift shop that also has a pharmacy if I need my prescriptions. And in November I will be able to have a great dinner at an Italian restaurant that is under construction.

It's a good place to live.

Ashley- Hey it's Mandy, your old neighbor in Boston who bummed rides off of you! I just spent 30 minutes checking out your blog and laughing a lot! Thanks for being so REAL. I also noticed that I know the girl, Courtney, in the last picture of this post on the right side. She is my best friend from high school's younger sister! Small world. She is way cool - young, hip, nothing that I am! Take care!