Wouldn't you know it, the day that Gavin leaves for a business trip, Garrett comes down with a fever. I am hoping that the Tylenol gets him through the night. Poor kid. He is never unhappy, and you can tell he is miserable. Now is the time I am wishing all that good-karma-mumbo-jumbo-stuff-of-my-mom's worked. I would be doing happy chants next to his bed all night. We've been so lucky to have had such a healthy summer. Makes me a bit nervous about the zillions of bugs that they will be picking up in the schools, beginning next week. Oy.


Shelby went hiking with her friend today. They had a lot of fun. Or so I heard...since I was home with an unhappy baby.


Dalton had his standard 2.5 playdates today. Honestly, I have created a monster when it comes to my oldest and playdates. The kid can not sit still for three minutes with out needing a friend, or something to do. I take full blame on this one. As a mother, I always wanted him to be stimulated, to have a lot of friends, to not be bored like I was the majority of my childhood. But now I realize that I went overboard. And now I am paying for it. I think that I also felt a little bit bad for him that he didn't have three brothers who were all one year apart in age, like many of his friends, so I overcompensated with playdates. We would have the whole town over, all the time, and he would have a million fun things to do, and he would never want for fun, fun, fun.

Problem is that now the kid does not know how to be alone. It gives him the shakes. But gone are the days where I can spend a big hunk of my time, scheduling out his social schedule. Shelby now has her needs, the baby is needing a lot more interaction, and I have stuff that I would like to accomplish in my life time. So he is finding out how to be alone with himself. Lately he has gotten much better. Thank the lord for Lego's. Seriously, whoever invented those things should be given a Medal of Honor. They actually keep him occupied for long stretches of time. And what he invents is really impressive. I can't wait for the day when his love of reading takes off. I think that it happened to me in the fifth grade...or was it the third??? I remember reading the BabySitter's Club Books like they were manna from Heaven. I could not sleep, I could not eat...I absolutely had to get to the end of the book the second I picked it up. They were the hot ticket item with my friends. We would trade them, and then chatter about the fun-filled, syrupy sweet story lines that were deliciously perfect for hyper-active, twitterpated elementary age girls. He is getting close. But it's not there yet.


Oh, and here are some pictures from the kids camp out this past weekend. They went with their dad up to Albion Basin, at Alta. Garrett was un-invited, and therefore, so was I. It was chilly up there. Only 30 degrees at night! Thankfully not only did Shelby have a nice warm sleeping bag, but she figured out that body heat is even better and found her way in to her dad's bag in the middle of the night. They roasted wieners, had Reece's Peanut Butter Cup filled smores (thanks Aunt Krissy for that invention...Shelby is now an addict), and went to sleep with the old-fashioned sounds of DS, and Itouch humming in their headphones.

They didn't see any "good" wildlife, but that's OK because Shelby and her friend saw a dead bird today on their hike, which they got to poke with sticks, so that makes it all OK. 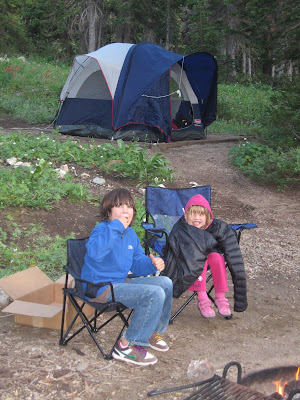 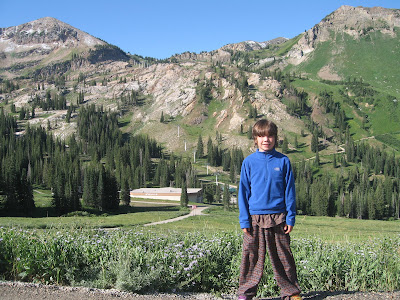 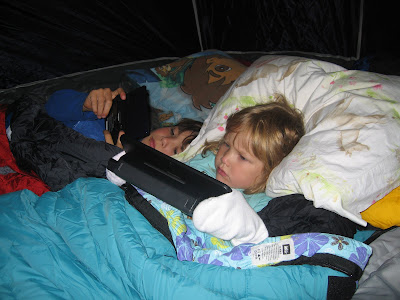 My pepper spray came in the mail day before yesterday. Gavin had ordered it for me. It's some new fancy kind of foam that sticks to your face. My friend Suzanne told me that the police recommend spraying it in your own face, so you are prepared if it is turned against you. Gavin said "No Thanks" to that suggestion. I don't know if I feel safer with it. What would I do after the guy was shot, and trying to rip his face off so that he could see? I guess run to my neighbor's house? I don't really know if there is a good option for self defense. With my luck, I would miss with my taser, and have to ask the intruder to wait just a moment while I reeled back in my line to try again. I would definitely shoot myself on accident with a gun...or Gavin, during an argument...I fight dirty. A knife...I have no upper body strength. I need a NERF gun with poison darts...that I could shoot! Yeah, that is what I should invent. That, or I want a "Panic Button". I want to be able to push a button and have all the lights on the outside of my house start flashing as a sign that there is trouble inside. That, or one of those Life Alert bracelets that you see on TV...or an alarm system...or a barky dog....

So sorry to hear Garrett is sick! Hope he feels better soon.

Can't wait to see you in a few weeks, but I know I'm going to have to fight all the members in your fan club for you to spend one of your spare minutes with me :)

I find myself thinking I need to do the same thing with my daughter. I feel so guilty she has no siblings, and think she has to do everyone now, etc.

I totally remember you and the babysitter's club books. That's hilarious!