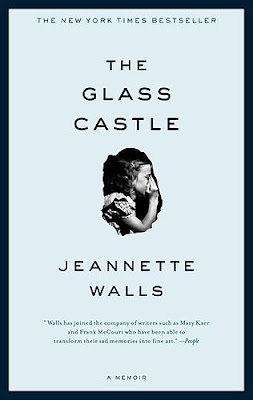 I know that I am about five years behind the times..on everything. I catch on to a cool song just as it is officially uncool. I see a movie after it's come to video, years after it's won all the awards, and I read a great book just as it comes off the New York Times Best Seller's list, after being there for one hundred weeks.

The book that I am talking about is called The Glass Castle. And yes, I am aware that I was the only person left in America that hadn't read it. I am glad that I did. It's the true story of a girl's childhood. Sounds unimpressive, I know. But it is actually unbelievable.

I found myself almost laughing at the beginning of it, because I felt like I was reading one of Dalton's Box Car Children books.

Yes, in make-believe it's exciting for kids to be abandoned, and live in an old railroad car with no plumbing, and forage for food, and have mentally ill parents. In real life, it's tragic. Yet, the way she tells it..through her eyes as a child...it often doesn't feel tragic. It's all they knew..her and her three siblings..so they imagined that their reality was sane, and safe, and OK.

If I weren't a parent, I imagine I would have had different feelings about this book. Her parents were clearly severely mentally ill. They were bright, mind you, but ill. In my pre-parent days I would have said that "It's not our place to judge"...and..."What's wrong with raising your kids whatever way you see fit?"...and a bunch of other respect-their-differences-garb.

But as a parent...I now say, "No way." There is nothing artsy, and fun, and wild and free about your kids having to dig through their school dumpsters so they don't go hungry after not eating for days.

Gosh, I made A LOT of judgements while reading this book. I found myself getting mad at the mother. I don't know why I didn't pass as much judgement on the father, who was equally at fault for the family's situation. I was also furious at our Nation's system..where children like these could just fall through the cracks. The author talks about the other poor families who lived near her when she was growing up, who were worse off...though it's hard to imagine how it could have been any worse. I am sure that the state agencies were absolutely overwhelmed and barely functioning as it was. But it says something about a government..about a Nation.. when the children are the ones who are suffering most.

Clearly this father was not emotionally or psychologically able to care for his children. And the mother was herself just a damaged child who was tragically narcissistic.
Maybe I should be ashamed to say this..that I think that people like this absolutely should not have children...but it's absolutely what I believe.

I really think that every child that is brought in to this world should be wanted. period.

Closing the book, I burst in to tears...Because it's NOT fiction. It's her reality, and it is the reality of MILLIONS of other children around the world...In this country..not Cuba, or Mexico, or Africa..but in our back yard-13 MILLION children live in poverty.

How can I even type that??

It is shocking... P O V E R T Y- (Translation...our neighbors and their kids are hungry. ...here in America...U S of A. No food on their tables...in their cupboards. Nothing.)

A report from the Every Child Matters Education Fund revealed that 3.5 MILLION children were REPORTED abused and neglected in 2005. And those were the cases that were reported. How many suffer in silence...without end? Gosh, this is when I start to spiral downward. This is when I want to throw in the towel. I mean, honestly. And we call ourselves a "civilized society"?

So, in reading this book, I don't know. I am glad I read it. Because it's true. And every truth deserves to be told. Nothing should be kept in the dark. It did make me uncomfortable. Because I live on my cushy east bench where there is no sign of want..and so to me, it doesn't exist. It's not in my world. And I hate myself for that. I really do. I think that primitive animals would offer more compassion to their fellow creatures than we do.

And then there is this idea of "fatalism". That these people are where they are because it's meant to be. That they chose this, or they deserve this... And to that I say ABSOLUTE BULL SHIT. There is no God in heaven who would let a child of his suffer or go hungry. Period. NO parent, in their right mind, would allow this treatment of their child. Yet, we imagine that a loving God is looking on while millions of his are pleading for his help and he "lovingly" turns a deaf ear to them? Ridiculous.

The idea that I am more "worthy" and therefore, my prayers of getting rain for my flower garden are being heard and answered because I am "blessed", while the kid who lives down the street is being beaten every night by his dad yet continues to plead and beg and pray EVERY moment to make it stop, is not worthy to have his prayers answered...

Yes, that is blasphemy. I am not kidding. If there were any idea more evil I have not heard it.

And yet, that is what pacifies people like me...who think, "God is aware of them..and knows their prayers. And if he wants to help them..he will." And that right there is the greatest sin of all: Compliance. Being an accomplice to the crime. So, I don't know. I don't know if I could do it...be a social worker. Because maybe I would reach up and strangle a dad if I knew he was hitting his kid. Really. I don't know how I could do anything else. Talking with couples about sex, or talking with teens about drugs, or talking about anything else...that I can do. But people who hurt their kids. That is one that just might be too tough for me. So, long story long: read the book and then do something about it.

Email ThisBlogThis!Share to TwitterShare to FacebookShare to Pinterest
Labels: Ashley at the U, books, losing it

Hi Ashley thanks for the post. I too am so disturbed at this society's tolerance/acceptance/compliance with parents, or any adult's, rampant neglegt and abuse of children while everyone looks the other way.
It's been on my mind a lot while the mother and her boyfriend of a little boy Robert are being investigated for his murder, after a 2 week man hunt for his body, found in a drainage ditch. How do things get that far? Now we are all mad, but there was definite neglect and abuse in that home, documented by state services, long before this horrific fatal event. What did I do? What did the neighbors do? What did extended family do? It is such a complex thought process, but one I think is more important than many issues we civilized "adults" choose to tackle first. Sobering, I know!

I have a lot of thoughts on this book. One of my girlfriends read it, asked me to read, and share my thoughts. Maybe I should find them.

What I liked about the book, though it was a bit painful to read was her quote at the beginning -- 'To My Husband who says 'everyone who is interesting has a history'. Paraphrasing. But comforting. Because who doesn't have a history?