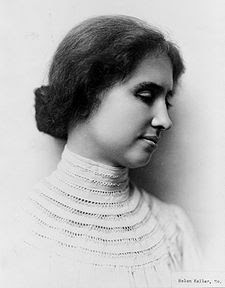 A professor of mine brought up this topic a few years back, and it has stuck with me. He said to most; George Bush was either JC's BFF, (not his exact words) or he was an evil moron. Bill Clinton was either an amazing leader, or he was degenerate pond slime. There was no grey area. It was black or white. But wasn't it quite possible that George Bush was neither of those two things and instead he was a good manager of people who didn't have the greatest knowledge of foreign affairs? And Bill Clinton was not Mahatma Ghandi, (another complex figure), or Larry Flint but rather a charming man who had some marital issues? This would be Duality. But how could that be? In my world I felt safe if I could stick people in to categories. Hitler: Evil with a capital E. Mother Theresa: Good with a capital G. And so on... There were good people and bad people...right? But was Hitler evil or was he a man who was very persuasive, and very mentally ill? Was Mother Theresa a saint, or was she a woman who had her faults, but also liked to serve others? I am reading an interesting book right now, entitled Lies My Teachers Told Me. http://www.uvm.edu/~jloewen/liesmyteachertoldme.php It deals with this exact idea; that it is human nature to want to demonize and canonize individuals, events, etc.. We want to paint the world as black and white. We want there to be a "bad guy" and a "hero". We want the hero to win. We don't want to know if the hero has flaws, or if the bad guy has another side to him. We feel safe when people and events fall in to these categories. For instance, when we think of Helen Keller, we often think of the movie with Patty Duke, and the story we learned in school, about the blind, deaf, and dumb girl overcoming it all with hard work. But what we don't know is what happened to Helen Keller AFTER that. Who was she when she grew up? What did she do?...The answer: "she was a radical socialist. She joined the Socialist Party of Massachusetts in 1909. Keller's commitment to socialism came from her experience as a disabled person. She worked to simplify the alphabet for the blind, but soon realized that dealing solely with blindness was treating the symptom, not the cause. Through research she learned that blindness was not distributed randomly throughout the population, but was concentrated in the lower classes; because of accidents in poor working environments, poor medical care, or women who were prostitutes who contracted syphilitic blindness. In effect, Keller learned that a person's social class controlled their opportunities in life, as well as their health. So here was one of the most famous women on the planet, coming out as a full-fledged supporter of socialism. She helped to found the American Civil Liberties Union, she supported the Socialist candidates for President, she composed essays on the subject, and worked tirelessly for this cause for the remainder of her life. But what do we know of this side of our Helen Keller?? Nothing. As soon as she came out in favor of these positions, institutions like the Brooklyn Eagle wrote columns that she was mentally inferior, where three years previously they had sung her praises for being gifted beyond belief, despite her physical limitations." And so the watered down "canonized" version of Helen Keller was created, and passed down, and taught to us and we bought it...because it felt good. But the unfortunate thing about black and white, is that it leaves out all the interesting, colorful, parts of life. I am not a good or bad person, I am not a "good mother" or a "bad mother"-I have up moments, and down. I do not have a "good" marriage or a "bad" marriage- I have a marriage that fluctuates perpetually between God-Awful and Sheer-Bliss, with everything in between, and that's life! So, as uncomfortable as it may be at times, I need to remember to adjust my TV screens from black-and-white to full-color. http://en.wikipedia.org/wiki/Helen_Keller

I loved this post. I think about this often too. But I may differ from you in that I believe we need labels keep our life from becoming chaotic. But the trick with Labels is REMEMBERING....even though you are catogorizing something or someone, doesn't mean there are not layers, or colors like you said.

I think Hitler was an evil person (my label)due to some of his actions, but he can be a socially persuasive and mentally ill at the same time and policically adept. many layers. Mother Theresa was a wonderful person (my Label), who loved to serve others, and had some problems in her life all at the same time. Me, I think I'm a good person (my label), but I'm not all the time. I think I'm a friendly person (my label) but not all the time. Sometimes I catch glimpse of myself in a reflective surface at the grocery store....the person looking back at me looks grumpy...not friendly at all. WHAT??!!! But I know I'm a friendly person.

I feel that quite often people (including me!) forget the Color to humanity and the layers that can all be present at the same time, and hold on to the "label" they have assigned, and never stop to think that history is not always acurate, people can/do change, and our "glasses" also change prescription....meaning we change how we view things through out our life.
Duality/Layers. This was a good topic!

you are so right on! It would be great to put people into little defined boxes, that way anyone that was in the box you don't like you wouldn't have to deal with. The problem that I have found is that people change boxes from time to time as do I. My challenge is to allow them to do that and not remember what i thought they were and I never allow them to change yet I expect everyone to believe me when I believed I have changed. I guess it all comes down to tallerance, patience, and forgivenece. All of which I am short on. Keep up the good work. We had a great time in Mexico, Love you.

Ooh Sara, isn't it a dilemma! I appreciate your comment. And as much as I try to stay away from labels, or at least question them- I do find myself labeling. I think that you are right Dan, that the problem is that people change, and we don't allow our labels to change with them. You are right Sara, that more than labels, it's the fact that we are all multi-layered- but that is hard to accept. Thanks for the good thoughts!